No information
Smart Guns are a minor hostile species in Paradise P.D., only appearing in the episode "Trigger Warnings". They are a brand of sentient guns invented by the NRA, which were invented for the purpose of making guns safer. Unfortunately, all they did was make guns even more dangerous than before.

In "Trigger Warnings", Randall Crawford took Kevin and Karen Crawford down to the NRA to show them the benefits of owning guns. There, they were greeted by Chip Fuckyeah, who showed them a new invention the NRA had been working on called "Smart Guns", which were anthropomorphic guns who would become friends with their owners and only shoot when the situation was necessary. This was an attempt to make guns safer and keep horrible people from shooting guns at inappropriate times.

There, Kevin got a gun named Mr. Bang Bang, although he didn't like it because it kept following him around and being annoying. When he got to Paradise P.D., he saw that all of the other members there had smart guns too, with Stanley Hopson having the gun that was used by John Wilkes Booth to kill Abaraham Lincoln, Gina Jabowski having a psychopathic gun that had a few smaller guns herself, Dusty Marlow having a large cannon which was always eating ammo, and Randall having a gun named Jean-Claude Van Blamme, a parody on Jean Claude Van Damme who acted masculine and liked to use 80's catchphrases. Kevin was really worried about the gun,s but Randall said that they were very safe to have around and they only shot things they considered a threat. Just then, Gerald Fitzgerald came in and all of the guns immediately ganged up on him and scared him out of the room, planning on shooting him just because he was black.

Randall led a gang of smart guns through town and ran around with them madly, giving out tons of smart guns to a bunch of brainsick, incompetent, and downright villainous people, such as dangerous street gangs, a schizophenic homeless man on the streets, Chris Brown, a blind man, Satan himself, a bunch of prisoners, a dog, and an unborn fetus, who used his gun to shoot him in the leg. Despite experiencing the effects of distributing weapons to unfit people, Randall still stood by the notion that everybody should get a gun.

At Kevin's apartment, Mr. Bang Bang watched him pee, which annoyed Kevin. Mr. Bang Bang then sneezed and nearly shot his penis off, which only angered Kevin even more. He told Mr. Bang Bang that he needed to leave, but Mr. Bang Bang said that he couldn't do that, because it was his duty to protect him from danger. Kevin swore that nothing dangerous was going to happen to him and just then, some Jehovah's witnesses came to his door. Kevin told him that he was Jewish and didn't want to convert, but then the evangelists' smart gun came and and threatened him at gunpoint to join their religion. He then tried to shoot him, but only shot his hair off. After this, Kevin slammed the door on them and Mr. Bang Bang told Kevin that this was a prime example of the kind of danger that could happen to him without a gun to protect him. Kevin argued that this danger happened to him because of a gun, and then Kevin showed Mr. Bang Bang a bunch of online news articles that demonstrated the dangers of guns, such as websites about mass shootings at places like schools, malls, stores, airports, and offices. This came as a horrifying shock to Mr. Bang Bang, and convinced him that he needed to change his ways and become a safer being.

Mr. Bang Bang then led a nationwide protest to all the other smart guns in the world, telling them that they needed to abandon their ammo and become non-violent creatures, which many of his followers did.

Kevin rounded up the smart guns and drove them down to the Paradise Airport, where they planned on going on a world tour to spread their message of non-violence to the world. However, they were stopped by their creator, Chip Fuckyeah, who didn't want them taking his guns away, so he opened fire on them with one of the regular guns he confiscated and caused the mass genocide and extinction of their people.

The smart guns all went to Heaven when they died, proving that even though they had villainous origins, they redeemed themselves and died as honorable heroes, albeit without living to truly change the world. 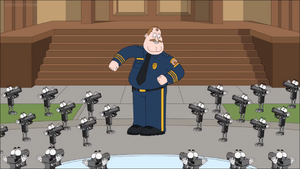 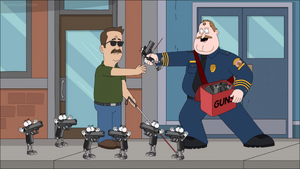 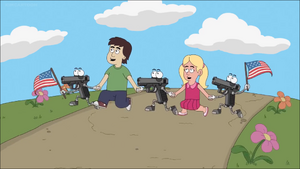 Children getting involved with smart guns. 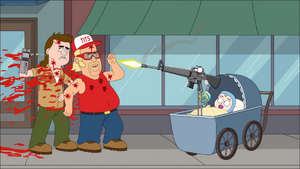 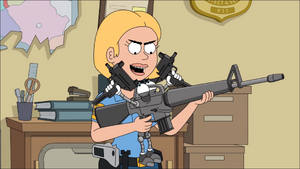 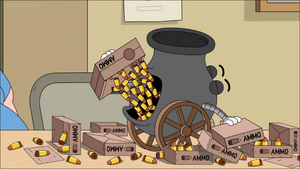 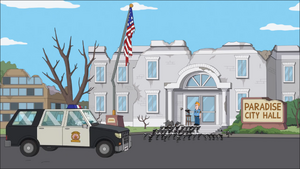 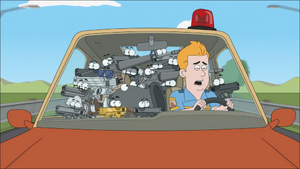 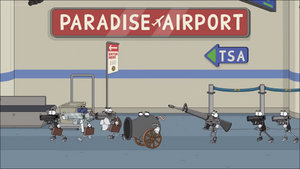 The smart guns prepaing for their world tour. 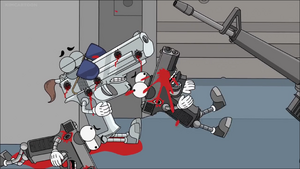 The extinction of the smart guns. 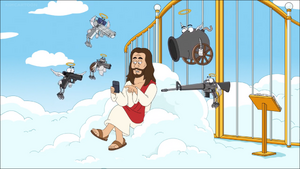 The smart guns in Heaven with Jesus Christ.