Leader of the Emojis (formerly)

Working on her teeth.

Smiling at all times.
Deleting "malfunctions".

Prevent Alex from deleting his phone data by deleting Gene and his friends (failed).

She was the supervisor of the Emojis Corp until the events of the film. She's Gene's archenemy.

She was voiced by Maya Rudolph, who also voiced Rapunzel in Shrek the Third and Julia in The Simpsons.

When Gene arrived at the text center, Smiler soon arrived. She then explained how the process of sending an emoji works and began to guide the other emojis throughout the text center. Even then, it's clear that underneath her smile, she has a more controlling and unforgiving side.

After the text center was accidentally wrecked by Gene, he was called to Smiler's office for a "teeny-weeny chat." When he arrived, she claimed that she about started looking for him and that he should come into her office for a "teeny-weeny chat. Gene said he promised to not make another mistake ever again (of not making the right face). Smiler said that she knew he won't. Whilst working on her teeth, Smiler stated that Gene was a malfunction and brought forth Anti-Virus bots. She told him that they would delete him that way he will never ever make a mistake (permanently), causing him to flee.

Thanks to an Anti-Virus bot, Smiler saw Mel and Mary Meh (Gene's parents) make their way out of Textopolis in order to look for Gene. This caused her to discover that Gene left Textopolis, leading to her sending more Anti-Virus Bots in an attempt to delete him.

Later, Smiler is so angry (despite her permanent smile) that Gene escaped for Alex's phone. A Dancer emoji (the one with the red and black dress) tries to help. Smiler said "not that happy", possibly because that would might distract her from her plan to delete Gene. Then, the emojis in Textopolis received the notification that Alex (the phone's user) scheduled a phone appointment to erase his phone's data, the rest of the emojis in her office began to panic. Smiler tried to calm them down but failed. At one point, when the other emojis in the room calmed down, Smiler inserted an illegal upgrade in an Anti-Virus Bot. Before the screen cut back to Gene and his friends, Smiler was heard letting out an evil laugh, further showing that she was getting crazier as the movie went on.

Eventually, the upgraded Anti-Virus Bot bought Gene back to the text center, where Smiler hoped to delete him in front of all the other emojis. Soon, Mel and Mary arrived. Mel revealed that Gene has the same "malfunction" that he had, leading to Smiler deciding to delete both of them. Luckily for them, Hi-5 and Jailbreak came in and Jailbreak instantly got to work at disabling the bot. Unfortunately for her, the bot managed to toss her off. Before it could finish her, Hi-5 managed to finish the job and disable the bot, which proceeded to fall onto Smiler and damaging her teeth. Despite her downfall, Gene was able to save the emojis.

In the movie's mid-credits scene, Smiler was seen at the "loser lounge", possibly being fired from her job and most likely lost her bots as punishment for her crimes, and wearing braces as a result of her damaged teeth. She was playing (and losing) a game of cards with the other emojis there and looks forward towards the camera looking somewhat sad (despite her looking like she is smiling). A fitting end for the well-intentioned but highly vain leader.

Smiler is a young female smiling emoji (😀) who had yellow skin, light blue eyes, white perfectly straight teeth, dark brown eyebrows, a tiny mole above her lips, three black eyelashes on each eye, and blonde hair styled on one side of her head. She presumably wears a lot of makeup because she has pink lips (likely due to lipstick) and pink cheeks. She is seen to constantly smile always.

At first, when she was in a good mood, Smiler was a kind and pleasant person. She was always full of smiles and seemed rather feminine, which was shown when she told Poop not to touch her.

However, things would change when she would get in a bad mood. She would become more vicious if she was put in a bad mood. As the film progressed, she became crazier and more merciless. She is also shown to be incredibly vain, shown as she works on her teeth a lot, such as when she began flossing and later cleaning her teeth when she was talking with Gene. This indicates that her easy-going side is nothing more than a facade.

Still, many of Smiler's actions throughout the movie have good intentions behind them, as it can be argued that she is simply attempting to save Textopolis just as all of the other emojis are, and her mission to delete Gene is what she believes will keep the city from being wiped out entirely (and based on several of the film's events, she is not necessarily wrong). Nonetheless, her ruthlessness behind her actions is what ultimately dubbed her a villain. Even her argument that Gene did pose a threat to Textopolis becomes overshadowed by her sadistic pleasure in deleting him. 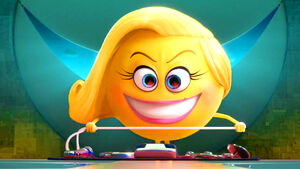 Smiler getting crushed underneath an Anti-Virus robot.

Smiler's defeat as she's being laughed by the unused emojis in the loser lounge.