The Smith-Knowles Mutation is a one-time villain from the FOX animated sitcom The Cleveland Show, only appearing in the episode "Hot Cocoa Bang Bang". It is a mutated fusion of the fictionalized real-life celebrities, Kevin Smith and Harry Knowles.

Kevin, Harry, and the resulting monster are all voiced by Kevin Micheal Richardson.

The Brown-Tubbs family attended a Comic Con Convention in San Diego. There, they witnessed famous filmmakers Kevin Smith and Harry Knowles get into a fight over a corn dog. The two of them were portrayed as really big and fat. The two obese movie makers got into a Sumo wrestling-esque match in front of a crowd of Comic Con fans.

As they slammed into each other and tried pushing each other away, a blast of sonic energy radiated off of the both of them and blew the faces of all the viewers, causing their skin to flap behind them.

Eventually, Kevin Smith and Harry Knowles forced themselves into each other so hard, that they formed one single entity. Their persons both disgustingly morphed into a gigantic, one-eyed, mutated creature, made out of dripping human flesh and body hair. The hideous monster summoned the third celebrity, Zach Galifianakis, asking him to join the mutation, for if he did, they would be powerful enough to conquer the entire galaxy.

It then let out a crazy sounding evil laugh and proceeded to eat a human being.

The Smith-Knowles Mutation is a gigantic one-eyed blob, made out of human flesh and body hair. It's one eye has a blood red iris, and there are two eye whites next to it. The mouth of the monster has many strings of skin connecting the top of the mouth to the bottom of the mouth. The human flesh that the entire body is comprised of is dripping and slightly liquified. There is a wife array of giant manboobs all over it's person. Much of the skin is turned inside out, showing the pink undersides of the skin. The creature has three arms. One of which hangs down and flaps. The monster also has patches of orange hair all over it, this coming from Harry Knowles' side. There are also a bunch of orange speckled spots that run along the arms. One of the arms is a short stub, that stick off of the back of the top of the creature's head. There are even small orange little stumps that stick off of a bunch of parts of the monster. It is unidentifiable what those are.

The Smith-Knowles Mutation is a reckless, destructive monster with absolutely no moral standards, no ethical code, and barely even any form of reason. It seeks nothing but chaos and the dominance over all of mankind. It's only mean of stability is obtaining the entity of Zach Galifianakis, so that it is already superior power can become absolutely unstoppable. It's main goal is to be the supreme controller of the entire galaxy. 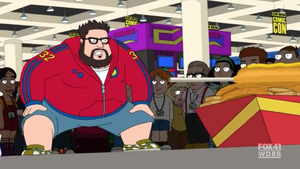 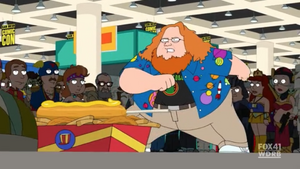 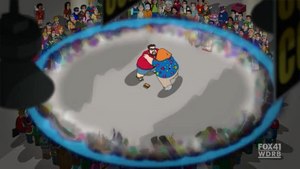 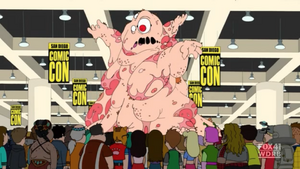 The rise of the monster.