Drinking in saloon, Stealing money, Helping every bad guy he can find.

Smitty is a minor antagonist who was featured in Red Dead Revolver.

Smitty is one of the bandits that attacks the Harlow's farm in Broken Creek. He is killed by Red Harlow during the attack. Then he can be seen in the mission "Bounty Hunter", he will be killed by Red again. Smitty is again seen in mission "Rogue Valley" where he is one of Bad Bessie's henchman. He is last seen in mission "Bar Fight" where he is a brawler and Dan and Sam's henchman.

After successfully completing the mission "Range War" on Bounty Hunter Mode, Smitty is unlocked as a playable character in Showdown Mode.

In combat with Red 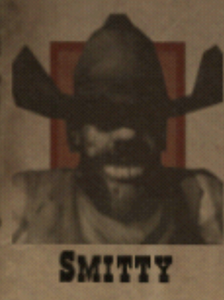