Hanging with Sub-Zero.
Serving Liu Kang and Kitana.
Serving the Lin Kuei.
Proving he and the Lin Kuei are great ninjas.
Aiding Sektor. (as a cyborg)
Aiding Noob Saibot.
Meditating.
Experiencing the thrill of fighting.

Smoke (real name: Tomas Vrbada, also known as Enenra in Mortal Kombat X and the cyborg Cyber Smoke) is Lin Kuei warrior who was transformed into a cyborg and an antagonist from the Mortal Kombat series of fighting games.

He was voiced by Ridley Tsui.

Smoke was born in the Czech Republic in Prague and eventually became a member of the Lin Kuei Clan and a close friend of the younger Sub-Zero. The pair went on a mission to Outworld together to kill Shang Tsung, but failed. Upon their return, they discovered that the Lin Kuei were transforming their best warriors into cyborgs and had already done so to Sektor and Cyrax. The two attempted to escape the process, but though Sub-Zero escaped, Smoke was so unfortunate.

Smoke was transformed into a cyborg and programmed to hunt down his former friend. After Sub-Zero made Smoke realize he still had a soul and that he was one of Raiden's chosen warriors, Smoke was captured and rendered inert by Shao Kahn's forces, then locked away in the bowels of one of the tyrant's fortresses.

Many years later, Smoke was discovered by Noob Saibot, who reactivated and reprogrammed the cyborg as his servant, so he could use him as the template for a new army of cyber demons. As they left the fortress, Smoke and Saibot were both aware of Sub-Zero and Sareena following them and eventually attacked the ice ninja. However they were stopped by Sareena.

Later, during Mortal Kombat: Armageddon, Smoke helped Noob Saibot stage a siege on the Lin Kuei temple, using his powers to transform Lin Kuei ninjas into shadow warriors. However he was defeated by Taven.

In his Armageddon ending, his nanobots grew and multiplied at an alarming rate, so much so that they were able envelop all of Edenia, transforming it into place of writhing grey material that calls itself Smoke.

In an Alternate Timeline, Smoke along with a new Sub-Zero (Sub-Zero's younger brother) were searching for the person who murdered the Original Sub-Zero. He and Sub-Zero split-up to cover more ground, though when they did, Smoke encountered Kitana, defeating her. Smoke then came across both Kano and Shang Tsung and first fought Kano, beating him as well.

Smoke and Sektor fought each other but even with his cyborg upgrade, Sektor was defeated. When Smoke was about to walk away, other nameless members of the Lin Kuei surrounded him. They attempted to capture him so they can turn him into a cyborg, but Raiden intervened preventing Smoke from becoming a mindless machine. Raiden asked Smoke to join him and he accepted, but asked if they could rescue Sub-Zero before the Lin Kuei captured him and turn him into a cyborg, a task that they failed. Sadly Smoke and the others, including Nightwolf, Kitana, Kabal, Cyborg Sub-Zero, Jade, Jax, and Stryker get killed single-handedly by Sindel. Quan Chi then enslaved all their souls so they serve him forever.

Smoke before becoming Enenra in the Mortal Kombat X Game makes a small appearance in only one MKX Comic Book. He is seen in the Netherrealm with Quan Chi and along with the Revenant version of Jax Briggs the two Revenants hold Cyber Sub-Zero still as Quan Chi prepares to turn Sub-Zero into one of his minions. Quan Chi manages to turn the cyborg back to his regular human former. The Revenants of Smoke and Jax watch as Sub-Zero is turned into a Revenant just like them. After this Smoke is not seen active until 25 years later in the Mortal Kombat X game where he decides to call himself Enenra.

Smoke now know as Enenra, like most of his comrades, were resurrected by Quan Chi to serve him and Shinnok. 25 years later Smoke aka Enenra is still under Quan Chi's control he, Liu Kang, Kung Lao, Sindel and Kitana became his primary enforcers.

Smoke is shown in Scorpion's chapter along with Quan Chi's other primary enforcers pledging their allegiance to Shinnok after his release. He and the other revenants appear at Sky Temple so Shinnok can corrupt the Jinsei. Smoke and the others decided to hurt Raiden instead of killing him because Shinnok wants him to suffer like he did.

When Cassie Cage and her team arrive at the temple Smoke is seen the other revenants when Kung Lao reports to Liu Kang that they have found Raiden's portal to the heavens. He, Liu Kang and Kung Lao go to destroy the protective wards that Raiden placed on the portal. The three return later to find Cassie's team fighting Kitana and Sindel. Jacqui and Takeda stay behind to fight the three remaining revenants.

After Shinnok's downfall Smoke retreats with Liu Kang, Kitana, Kung Lao and Sindel back to the Netherrealm. Smoke is not seen after this.

Raiden appears in the Netherrealm tossing Shinnok's decapitated head in front of Liu Kang and Kitana the new rulers of Netherrealm waring them the of the eternal suffering that awaits anyone who dares to attack Earthrealm (including Smoke).

While Smoke's human soul is a revenant trapped in the Netherrealm Triborg mentions that he has Smoke's cyborg data in him.

Although he doesn't make an appearance in the game Noob Saibot reveals to Sub-Zero that Smoke is still a revenant in the Netherrealm. After the defeat of Kronika and her followers the revenants who served her died. However Smoke, Nightwolf, Sindel and Stryker did not add her so they still remain while the revenants of Liu Kang, Kitana, Kabal, Jade and Kung Lao are killed. While Noob Saibot tells Sub-Zero that Smoke is still trapped and controlled by the Netherrealm. Smoke's cyborg data was downloaded into Triborg in Mortal Kombat X. However the young Smoke from the original timeline makes an appearance in the DLC called the Krypt Somke has his classic outfit and design. Smoke from the original timeline like Rain can be randomly falling off a bridge at a certain time then lands on the same spike that killed Rain. Over a certain amount of time young Smoke's body and soul will disappear. Shang Tsung collects his soul and during some fights changes into Smoke and uses his powers.

As a human, Smoke has the ability to emit smoke, most commonly seen as the smoky fumes that his human forms emit. He still seems to retain this ability in his cyborg form, though he does not seem to use it much. Smoke usually uses this ability to disappear or create a cloud of fumes that his opponent chokes on, making them open to an attack. After becoming a nanotech based cyborg, his body appears to be made of smoke or nanites emulating the appearance of smoke. Smoke also gained the ability to transform others into shadow warriors by flowing his gaseous mist into them. 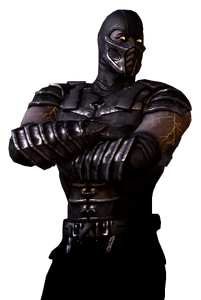 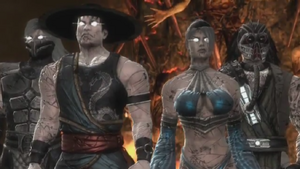 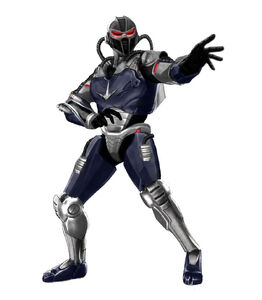 Smoke as a cyborg. 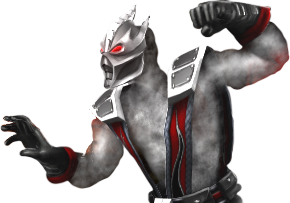 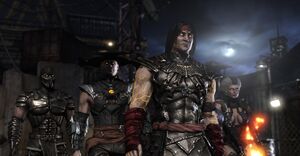 A gif of cyber Smoke. 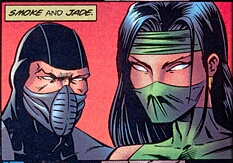 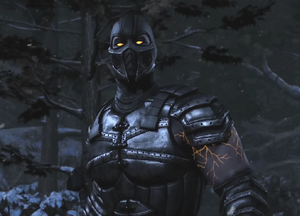 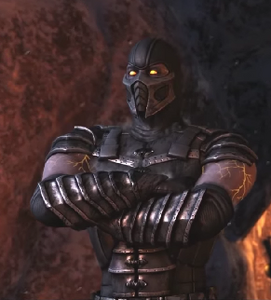 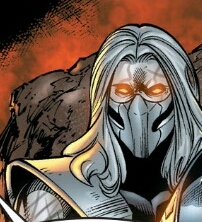 Smoke in the Mortal Kombat X comic book series.
Add a photo to this gallery

Retrieved from "https://villains.fandom.com/wiki/Smoke?oldid=3662475"
Community content is available under CC-BY-SA unless otherwise noted.