Tormenting the residents of Ponyland.

The Smooze is a gargantuan purple slime-monster and the secondary antagonist of My Little Pony: The Movie (which took place in "Generation 1" canon, as classified by collectors, making it very different from the current series and more in line with what modern audiences associate Care Bears and other "kid-friendly" cartoons to be like) and it is a minor, non-antagonistic character in Friendship is Magic (Generation 4).

He was voiced by Jon Bauman.

The Smooze is a genuinely terrifying being, especially giving the setting it was in - with the ability to grow to gargantuan sizes it spread across all of Ponyland (the original Ponyville) and buried anything (living or not) in its path completely ruining the land and turning once paradise-like fields and castles into barren wastelands. It also threw chunks of itself around that when attached to living beings turned them "mean" and "grumpy" (which despite the childish language is actually a more dangerous threat than one might think as removing living creatures' ability to care about each other can lead to apathy and despair (also without the ability to care for other beings people often develop sociopathic tendencies) ).

The Smooze was semi-sentient, able to form hands and faces but only able to express rage and malice. This is shown with animalistic roars and grunts (as well as limited speech (see trivia). The ponies were originally powerless to stop the beast after the witch Hydia released it. Even the Rainbow being ultimately overwhelmed by the Smooze's power.

Yet just as the Smooze seemed ready to devour the last bit of Ponyland not corrupted by its presence, the Flutter Ponies arrived - using their magic they managed to cast the Smooze away and undo its evil before lifting the mass of slime into the air and dumping it back into the volcano it came from along with Hydia and her two daughters.

Smooze returned in the series and first appeared in the episode of the fifth season called "Make New Friends but Keep Discord", though he was a vastly different character there.

Even without the Flume and remaining unfinished, the Smooze boasted immense destructive power and size, consuming entire mountain ranges and causing ripples on the earth marking its arrival. Anything that was struck or touched by its goo (with the exception of Spike who only had a small bit of Smooze on his tail) became bitter and grumpy. When its initial rampage stopped, most of the Smooze's ooze became hard and downright impenetrable according to Wind Whistler, making the land it had consumed impossible to recover (up until the Flutter Ponies cleaned up Dream Valley).

Hydia and the ooze itself both claimed nothing could stop the Smooze, however by the end of the movie Hydia reveals that she lied about this, so it's unknown if there are other things that could've stopped the Smooze aside from the Flutter Ponies. 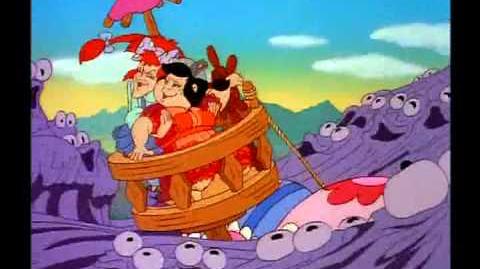 My Little Pony Song "Nothing Can Stop The Smooze" 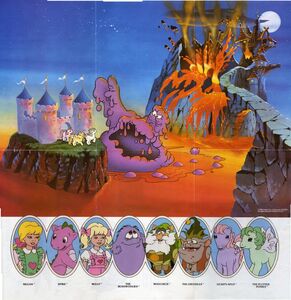 The Smooze as he appears in a poster for the movie

The Smooze's path of destruction 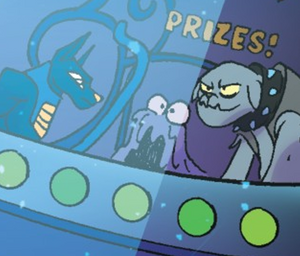 The original Smooze's cameo in IDW's MLP comics for G4