Help the Smurfs to stop Gargamel
Help Vexy and Hackus to become a real Smurf (all suceeded).

Smurfette is a villainess-turned-heroine and the main protagonist in the cartoon series, The Smurfs.

Smurfette was created by Gargamel when he planned to use the Smurfs' big hearts as their weakness. He created her by using blue clay, sugar and spice but nothing nice, crocodile tears, half a pack of lies, a chatter of a magpie, and the hardest stone for her heart. When she is created, she has a big nose, black hair, and doesn't look cute. Hefty Smurf has found her in the forest and is sent in the Smurf village where she gets her own house and starts her plan.

During this time, she causes trouble the Smurfs. Smurfette plans on having them go to a picnic with her. Unfortunately, her plan failed when the Smurfs aren't coming due to their busy activities. Joker Smurf just show up to pull a prank on her. Next, she lures Greedy Smurf into opening the dam. When he tries to close it, she gets into a struggle of keeping it open. Smurfette has fallen into the river, but the Smurfs saved her. Papa Smurf asks her why did she try to open the dam, and Smurfette tries to say she never did that.

However, she is sent to court. Realizing there's no way out with the Smurfs having evidence on her and what Greedy has told them, Smurfette cries and admits of working for Gargamel. Hefty is outraged by this and attempts to hit her, but holds back when Smurfette cries of how she is ashamed of all this. She is willing to get her punishment: throw her out of the village, abandon her in the forest, or send her back to Gargamel. At this point, all the Smurfs cried. Papa Smurf took pity on her, reassuring that it's Gargamel's fault, not hers. Smurfette wishes on becoming a real Smurf and Papa agrees on that.

At this point, her appearance is changed: her nose is little, her hair is blond, and looks attractive. Gargamel contacts her to see this. Knowing Smurfette is not under his control anymore, he manipulates her into bringing all the Smurfs for lunch. However, it's a trap as Gargamel captures all the smurfs.

Smurfs in a box, making them suspicious Smurfette is acting no good in this. She arrives to see she's been tricked and comes up with a plan to save them. Smurfette appears in disguise as the Lone Smurf defeating Gargamel and Azreal, and saving the Smurfs. She reveals her true identity, finally gaining their trust.

Smurfette has turned evil in the sequel of "The Smurfette" episode, "Smurfette Unmade" when Gargamel uses a spell to turn her back to her original form. This gets her to put on a blond wig as a disguise. She successfully sent Gargamel to the village to capture the Smurfs, but not before her disguise is blown off by the wind. Papa Smurf states that he can't turn Smurfette back to her Smurf form. At this point, Smurfette begins to show remorse for her actions. When Gargamel attempts to use Baby Smurf for his plans, she is against this, and is turned back to normal again as she defeats him, Azreal, and Scrupple, redeeming herself once again.

The Smurfette appears in a game as an hero and a playable player protagonist in the video game The Smurfs 2.

Smurfette appears as a hero to face a evil counterpart of herself who was been hired by Grey Papa Smurf. 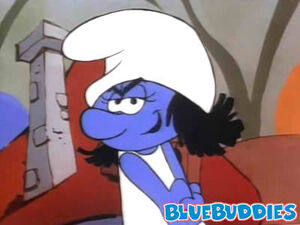 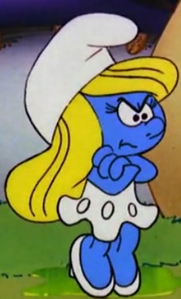 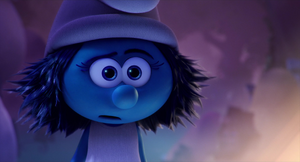 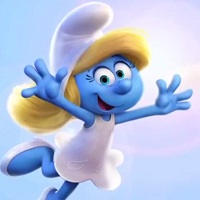 Smurfette as she appears in Smurfs: The Lost Village.
Add a photo to this gallery
Retrieved from "https://villains.fandom.com/wiki/Smurfette?oldid=3775573"
Community content is available under CC-BY-SA unless otherwise noted.