Kuudere
Snake (in Japanese: スネーク, Suneeku) is an antagonist in Black Butler/Kuroshitsuji. He is the footman of the Phantomhive household. He was formerly a first-string member and the snake charmer, who specialized in snake dance, of the Noah's Ark Circus. He is said to be half-snake himself, Snake is capable of understanding snakes and allows them to speak through him. He has at least eight snakes: Wordsworth, Emily, Goethe, Oscar, Wilde, Webster, Bronte, Donne, and Keats.

In the Phantomhive Manor Murder arc and its OVA adaptation Kuroshitsuji: Book of Murder, Snake is the main antagonist who was responsible for the murders in the Panhomhive Manor. However, in the rest of the story, he became a supporting character after joining the Phantomhive Household.

He is voiced by Takuma Terashima in the Japanese version, and by Spike Spencer in the English dubbed version.

When he was younger, Snake was kept on display, but he was eventually rescued by the other first-string members. Because of his skill with snake charming and because they had no one else capable of doing it, Joker allowed Snake to become a first-string member as well.

Snake is a young and lean male. He has golden eyes, short white hair—which includes a distinct cowlick—pale skin interspersed with scales, and a forked tongue. Additionally, Snake always has at least one of his snakes with him.

Previously, when he traveled with the Noah's Ark Circus, Snake dressed in thigh-high boots and a high-collared jacket with baggy sleeves that were long enough to cover his hands. He wore a striped black-and-white shirt under his jacket; it was cinched at the waist and neck, with two belts in each location. When venturing somewhere considerably far, he would slip a solid-colored cape over his jacket and shirt.

As the footman of the Phantomhive household, Snake sports a suit, with a low vest and a ribbon instead of the conventional tie. 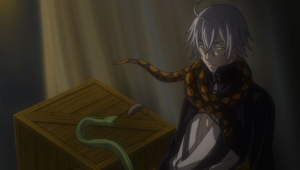 Snake dances with his snakes. 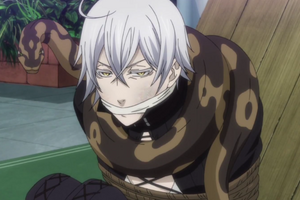 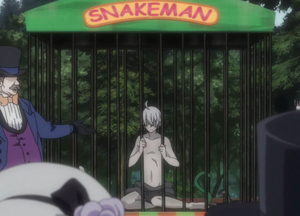 Snake on desplay in a freak show. 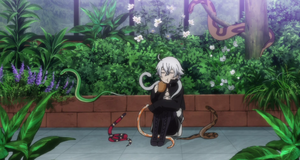 Snake relaxing in the green house of Phantomhive Manor.
Add a photo to this gallery

Retrieved from "https://villains.fandom.com/wiki/Snake_(Kuroshitsuji/Black_Butler)?oldid=4063644"
Community content is available under CC-BY-SA unless otherwise noted.