Leader of a nameless Cult

The Snake Demon, also known as the Serpent Demon, was a flashback antagonist of Demon Slayer: Kimetsu no Yaiba. She was worshipped by the entire Iguro Family.

The Snake Demon had black-layered hair like Obanai Iguro and the other members of the Iguro Family. She has layered black fur, and long, slanted pupils resembling a snake with a mouth reaching from ear to ear. Next to the oblique of her chest, her upper torso has three lines and has a snake's lower body.

The Snake Demon had taken the mysterious liking for Obanai Iguro, his heterochrony caused him to look "rare" in her eyes. She had a peculiar preference for the infants and frequently demanded them as their favorite meal. The Snake Demon was probably smarter than any average demon because she could build a contractual relationship with humans, which in effect gave her a feeding ground to eat in, a steady supply of her favorite form of "food" and a place to hide for a hundred years completely undetected by both sunlight and the Demon Slayer Corps. The Snake Demon eventually met the Iguro Family at an unspecified stage, and negotiated with them. To exchange for the wealth so she would gain more power from her attacks, the family would feed her with their offspiring.

At one point, Obanai was born in 370 years the unusual case of a male in the family. As Obanai grew up, he was brought to the Snake Demon, who had his face sliced across the mouth so that it resembled her own, gathering the blood, he coughed, and serving her. Knowing that she was in danger, Obanai secretly dug a way to escape his misery, but the Snake Demon caught him when he was about to run away. Eventually, she was killed by Shinjuro Rengoku, the Former Flame Hashira thus saving Obanai's life. Obanai's cousin came and started berating him for attempting to escape, since it contributed to the death of the 50 Iguro family members, arguing instead that he would have died, which he considered to be insane. Nevertheless, her words stuck deeply on him, and knowing the danger that demons posed to the world. Obanai Iguro became a demon slayer following the incident. 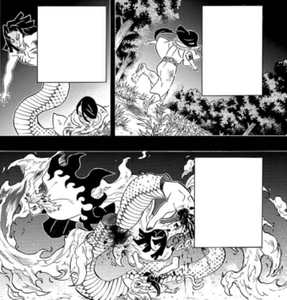