Feeding off of its host's dispair.

Turn Marry into Medusa to retain its immortality (succeeded in Outer Science; failed in Mekakucity Actors).

The Snake of Clearing Eyes is the main antagonist of the Kagorou Project franchise. It is one of the snakes of Azami and was the one who suggested creating the Heat Haze to her. It is also known to have given Kenjirou his eye ability.

The Snake of Clearing Eyes is voiced by Mamoru Miyano (who is best known for voicing Light Yagami in Death Note.) in it's snake form, and by the late Keiji Fujiwara while possessing Kenjirou (who also voices Esidisi, Mewtwo, Ardyn Izunia, PoH, Axel, Ali Al-Saachez, and Dracula.).

Like all of the other snakes of Azami, the Snake of Clearing Eyes is a solid black snake with deep red eyes and a purple tongue.

While it did not affect Kenjirou's appearance while possessing him, aside from giving him the usual red eyes while using his power, it affected Konoha greatly, as it gives him black hair and wears a black shirt instead of a white one. The black shirt that Konoha wears beneath the upper one remains black. His eyes appear yellow, as do the yellow circles above the right cheek.

The Snake of Clearing Eyes can be considered a malicious entity that enjoys spreading misery. It has a rather indifferent view on things, although it does tend to look down on its subjects, like other snakes do. Because Kenjirou is its "master", it intends to obey his desire, which is to meet Ayaka again. It can go through drastic extents to reach "its" goal, such as killing Kenjirou's precious students Takane and Haruka.

After Azami left the world and entered the Heat Haze, the snake attempted to use Marry to create a new Medusa in the real world, as stated by Kano. While inside Konoha, the snake takes on an even crueler character as it kills the entire gang with seeming glee, just so that it could make Marry use her power to unite the snakes. 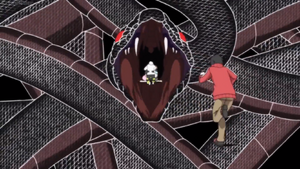 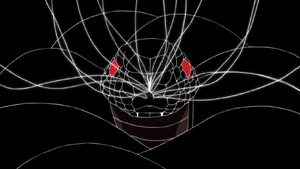 The Snake cursing Takane into its dimension. 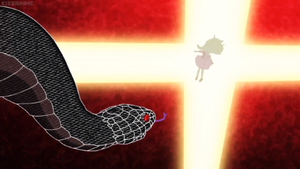 The Snake watching Azami use the last of her strength to send Marry back to the mortal world.
Add a photo to this gallery

Retrieved from "https://villains.fandom.com/wiki/Snake_of_Clearing_Eyes?oldid=3708959"
Community content is available under CC-BY-SA unless otherwise noted.