Snakebite Scruggs is a supporting antagonist in Scooby-Doo on Zombie Island. He is a fisherman who didn't like folks messing up his fishing. For catfish, he used a hunting pig named Mojo to help him.

He was voiced by Mark Hamill, who also portrayed the Joker and Ferris Boyle in the DC Animated Universe, Chucky in the 2019 remake of Child's Play, Darth Bane in Star Wars: The Clone Wars, Ozai in Avatar: The Last Airbender, Hobgoblin in Spider-Man: The Animated Series, Arnim Zola in Ultimate Spider-Man, Skeleton King in Super Robot Monkey Team Hyperforce Go!, and Tony Zucco in The Batman, and portrayed the Trickster in The Flash.

Scruggs is a scrawny, over-worked catfish trapper. He is a middle-aged white male with messy blonde hair who wears a blue-green vest over a tattered white t-shirt, brown pants, an old brown hat with a red stripe around it, and a belt which bears a snake-skull buckle. He also wears a necklace which hangs large, spiky bones or teeth around a small cord. His eyes are misaligned, his right one is glazed over completely, suggesting either cataract or some form of previous damage.

Snakebite has an overall bitter personality. He is generally very nasty and unpleasant. He possesses an extreme dislike for any and all tourists, mainly because he claims they scare away Big Mona, a catfish that he has be trying to catch for years. Snakebite does however have some good in him though, as he saved Shaggy and Scooby (though begrudgingly) from alligators. 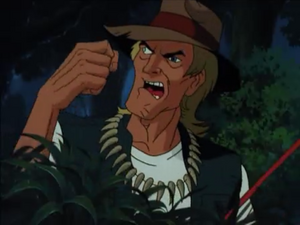 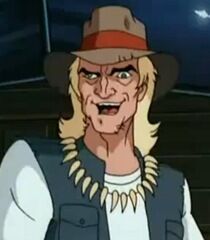 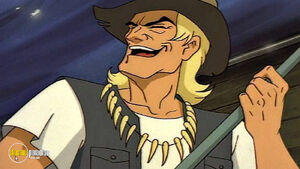