Dudley Do-Right of the Mounties

Tying up women to railroad tracks.

Defeat Dudley and the Mounties.

Snidely Whiplash is the main antagonist of the Jay Ward cartoon Dudley Do-Right of the Mounties.

He was voiced by the late Hans Conried, who also voiced Captain Hook in Peter Pan, portrayed Dr. Teriwlliker in The 5000 Fingers of Dr. T, and as the second voice of the Grinch in Halloween is Grinch Night.

Snidely Whiplash is modeled after classic Vaudeville and silent film villain stock characters, dressed all in black with a cloak and crooked top hat. His also has green skin, a large crooked nose, and a long handlebar mustache which he twirls with one hand at any opportunity.

Snidely is fully aware and proud of his status as a villain, and does everything he can both to commit crimes and thwart or even defeat Dudley. His various schemes include robbery, kidnapping (usually Nell Fenwick), attempted murder, foreclosing mortgages, creating a giant monster, and his personal favorite, tying ladies to railroad tracks.

Though he is shameless in his villainy, Snidely has at least once expressed frustration and shame for tying ladies to railroad tracks for no reason, claiming he's "got this thing" about it (treating it similar to a drug addiction). One episode even involves Nell putting on a mock trial for Snidely, revealing that his railroad-tying habit was the result of growing up as an orphan with an interest in tying knots which, due to a lack of proper upbringing, led to tying ladies to railroad tracks. 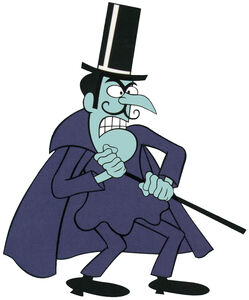 Snidely Whiplash as he appears in Dudley Do-Right of the Mounties. 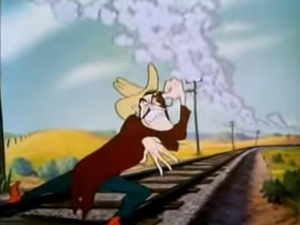 Snidely Whiplash in The Brave Engineer. 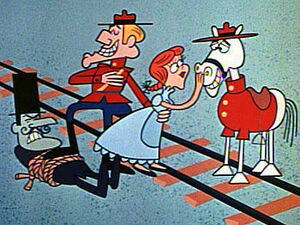