Snorky the Elephant is the secondary antagonist-turned-anti-hero of the 2019 direct-to-video horror comedy film The Banana Splits Movie. He is one of the members of the Banana Splits who go on a rampage after their show was cancelled. However, he redeemed himself after meeting Harley Williams.

He was portrayed by Brandon Vraagom, but wasn't voiced.

Snorky at first was a goofy mascot created by Karl who entertained children. However, after learning his show was cancelled, Snorky and his friends go on a rampage.

He eventually starts stalking Mitch Williams in the Banana Buggy after Mitch left his family alone after it was revealed he was cheating on his wife. He kills a security guard off-screen by chopping his head off, and hits Mitch after he learned of the murder.

Later, he is seen meeting Harley Williams and his friends. After Harley does the Snorky Shuffle, Snorky's dance, Snorky befriends the trio of children.

He later leads the kids to Fleegle and Drooper who are performing a "show" to frightened children. Snorky gives Harley a key after he was chained up so he can free all the other children.

After Fleegle and Drooper were killed, Bingo is approaching Harley and his family (minus Mitch) ready to kill them, until Snorky pushes and kicks Bingo, starting a fight. Bingo rips Snorky's heart-like core out, while Snorky splits Bingo's head in half, killing both of them. Harley says to Snorky that he was always his favorite before Snorky dies.

Later, Poppy, going crazy after her boyfriend was killed by Fleegle, takes the corpses of the Splits, including Snorky, on the Banana Buggy.

Snorky is a mute elephant wearing a pair of pink sunglasses and a green vest. Like the original series, he speaks by honking his trunk. 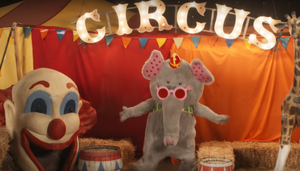 Retrieved from "https://villains.fandom.com/wiki/Snorky_(The_Banana_Splits)?oldid=4048965"
Community content is available under CC-BY-SA unless otherwise noted.