Sambala (in some legends)

Freezing everything in her way.

Have Kai remain in her icy castle forever.

The Snow Queen is the titular main antagonist of Hans Christian Anderson's 1844 Danish fairytale of the same name and its film adaptations, with the exception of the sympathetic portrayal in Disney's 53rd full-length animated feature film Frozen, though she is portrayed as a villain in some parodies. She is a morally ambiguous witch who possesses cryomancy, the magical ability to manipulate ice and cold.

In the 1957 Soviet animated film (though the English version came out in 1959) directed by the late Lev Atamanov, the Snow Queen saw Kay through her mirror, saying that if she came in, he would put her on a hot stove and melt her. Angrily, the Snow Queen smashed her mirror and sent its shards flying toward the village.

She was voiced by the late Louise Arthur in the 1959 dub and Kathleen Turner in the 1998 dub.

In the 1995 British animated film directed by Martin Gates, the Snow Queen lives at a palace in the North Pole. She has three trolls named Eric, Baggy, and Wardrobe. Her plan was to set up her magic mirror (which was her most valuable possession) up on a mountain to freeze the entire world, however, the trolls messed up causing the mirror to fall onto their flying machine's propeller and break, shattering it into pieces.

Two of the pieces hit Tom in the eye and heart, turning him evil. The Snow Queen sent her bats to retrieve the pieces. Realizing that the last two were inside Tom, the Snow Queen captured him and took him to her palace, where he began to rebuild her mirror. When the trolls warned him that the Snow Queen would kill him to get the last two pieces, she kissed him, turning his veins to ice, which would kill him when it reached his heart. However, Ellie, Peeps the bird, Dimly the reindeer, and Freda arrived at the Snow Queen's palace and the trolls decided to help them.

Freda made a potion to dissolve the mirror, but before Tom could drink it, the Snow Queen blasted it away with her staff causing it to be impaled on an icicle. After a fierce battle, the vial of potion was hit and fell onto the mirror, destroying it and freezing the Snow Queen. However, according to Freda, she will not stay frozen forever and will return.

She returned sooner than expected; in The Snow Queen's Revenge, her bats took her staff and placed it in her hand, unfreezing her. The Snow Queen confronted her trolls, who seemed to go back over to her side (with much reluctance from Baggy and Wardrobe) and told her that Ellie escaped. The Snow Queen kidnaps Dimly (who had just returned to take the trolls somewhere to live) to lure Ellie to her palace and get her revenge. As it was getting to warm in the North Pole, the Snow Queen left for her other palace in the South Pole, on a volcano. There, two more of her minions were seen; two penguins, Pearl and Elspeth. While waiting for Ellie to come to her, the Snow Queen began construction on an ice pterodactyl called an Iceosaurus, which can freeze anything with its eyes.

Ellie arrived at the palace and rescued Dimly from his cell, but he was unable to fly away from the palace. The Snow Queen and the Iceosaurus attacked Ellie, Peeps, and Dimly, however, Ellie used Freda's magic device as a shield to deflect the Snow Queen's attacks, which hit the Iceosaurus and caused it to fall to its death, causing a volcanic eruption, destroying the Snow Queen's palace. Brenda the wallbird flew Ellie, Peeps, and Dimly away, while the trolls and penguins were able to escape as well, however, the Snow Queen was unable to escape due to her palace crumbling and fell into the lava. Her body was shown intact afterward and turned to stone (along with her staff). Before the credits roll, her eyes are shown glowing blue, indicating that she is still alive, but either trapped forever or doomed to eventually die from the lava.

In the 2002 made-for-TV film of the same name produced by Hallmark Entertainment and directed by David Wu, which is roughly based on the story The Snow Queen, The Snow Queen in this version is intentionally malicious towards Gerda and desires to keep Kai for herself. Throughout the movie it is slowly revealed that the Snow Queen has been hoarding power for some time, intending to destroy all of the other seasons and ruling the earth alone. She intended to achieve this goal using the Devil's mirror, which was shattered into thousands of pieces above the earth. The Snow Queen initially kidnaps Kai because the final piece of the mirror fell into his eye, but she takes him to her palace and charges him to fix the mirror the way it was.

Additionally, it is implied that the Snow Queen caused the death of Gerda's mother because she was also a magically inclined rival of the Snow Queen. In the movie, she is not the only woman who controls a season; three other women, who originally have never got anything to do with seasons, are the other seasons: The witch rules spring, the queen rules summer, the robber hag rules fall and the Snow Queen rules winter. There is also a minor subplot involving a fierce talking polar bear who is the Snow Queen's henchman and stays by her side because he is in love with her. After her defeat, he carries her off and is seen taking the form of an elegantly dressed man.

She was portrayed by Bridget Fonda.

In the 2012 Russian computer-animated film of the same name written by Vadim Sveshnikov and directed by Vladlen Barbe and Maxim Sveshnikov, she was voiced by Cindy Robinson in the English dubbed version. The Snow Queen was once a child named Irma, who had northern magic. However, when children kept accusing her, she went to Imana's cave and wished for the children to turn into ice. Her skin also turned blue in the process.

Due to her fear of magical mirrors, The Snow Queen took away Master Vegard and his wife Una and turned them into ice; but their children were safely hidden. Years passed and she sent Orm to get rid of Master Vegard's successors, which were Kai and Gerda. While Kai was abducted, the Snow Queen interrogated him to tell her that he has a sister. After hearing his words, she froze his heart and left him lying on the ground. Later at the Ice Palace, Gerda noticed that her brother was frozen and wept. During the final battle, Gerda exposed the Snow Queen to a magic mirror and turned back into Irma. After being hugged by Gerda, Irma turned back to a normal girl as well as the ice palace collapsing and that the eternal winter had stopped.

In this film, the Snow Queen, named Elsa, serves as the deuteragonist, as she is a foil to the hero, and an anti-villain/anti-hero. She is not evil at all, but all of her bad actions are due to despair and fear, as opposed to the original versions.

She is the Queen of Arendelle, who leaves the country after her powers are exposed and she flees to the mountains, while accidentally freezing Arendelle.

While Elsa is a good character, she committed various villainous deeds, including creating a snow monster to send Anna and Kristoff away, freezing Arendelle, freezing Anna's heart, almost killing Hans' guards and more, though they were for privacy, were unintentional and in self-defense respectively.

In the early concept of the film, in fact, Elsa was set to be the main antagonist of the movie, and her Snow Queen outfit used to be dark instead of pale blue. Elsa's early concept art was inspired by the late Amy Winehouse and some of her outfit's appearance were based from Jadis the White Witch from The Chronicles of Narnia: The Lion, the Witch and the Wardrobe. She was originally depicted as a ruthless, oppressive and cold-hearted tyrant with an army of giant snow monsters (only Marshmallow remained from this Snowmen Army).

However, this did not go very well as it would have been very difficult to reform her as she was an outright villain and after listening to "Let It Go" (which is supposedly Elsa's villain song), the writers changed this idea after realizing the song's motivations of self-improvement were too positive to be expressed by a villain, thus turning Elsa into the anti-heroine of the film, leading to the creation of Prince Hans as the main antagonist instead.

Although Elsa is the deuteragonist of the film, she caused most of the protagonists' problems while Prince Hans acts as the main antagonist.

Elsa would later return as a supporting character in the 2018 film Ralph Breaks the Internet, where she is a resident of the Internet alongside Anna and the other Disney Princesses.

Elsa returns as the protagonist of the 2019 sequel Frozen II, where she learns that her mother Queen Iduna was a Northuldra tribeswoman who rescued her father King Agnarr during a war between the Northuldrans and Arendelle soldiers. She later learns that her deceased grandfather King Runeard instigated the war as he believes that the Northuldrans' connection to magic would serve as a threat to his power and that his actions angered the forest spirits into creating a barrier from ever entering or leaving the Enchanted Forest. Elsa also learned that the forest spirits were responsible for giving her powers as a reward for Iduna's selfless act towards Agnarr and that Runeard had built a dam that would drain the forest's resources before his death, so she had Anna and the others to destroy the dam to end the war and save their kingdoms. In the end, Elsa decides to remain in the Enchanted Forest as its new Queen while declaring Anna as the new Queen of Arendelle.

The Snow Queen, named Freya (also known as the Ice Queen), is the secondary antagonist turned anti-heroine of the 2016 film, The Huntsman: Winter's War, a sequel of Snow White and the Huntsman. She is the evil Queen Ravenna's sister, a powerful sorceress with the ability to manipulate ice and snow. In this version, she is portrayed by Emily Blunt.

Barbie in the Pink Shoes

The Snow Queen appears as a villain in this Canadian film and has a Russian accent. She controls everything and everyone in the Ballet World, and when Hailey and Kristyn's arrival disrupt the balance, she immediately wants to find out what is going on. When she discovers about Kristyn and Hailey, she freezes Hailey, turning her into a statue and brings her back to her castle. When Kristyn arrives to save her, the Queen controls Hailey, making her dance under her own command. Kristyn demands she stops and the Queen controls her instead. But as Kristyn goes off the choreography, the Queen loses her control on her and is destroyed through Kristyn's dancing from her heart. She is actually the fantasy version of Kristyn's formerly bossy dance teacher, Madame Natasha. 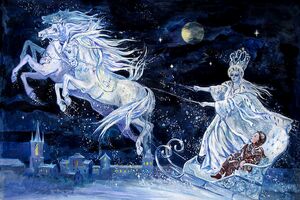 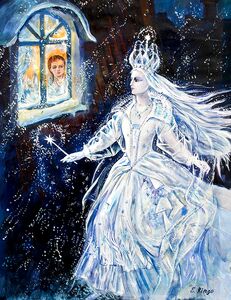 The Snow Queen from the 2012 animated film. 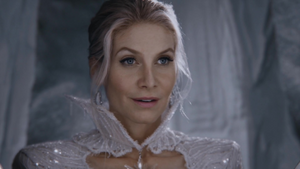 The Snow Queen from Once Upon a Time, but she is named Ingrid. 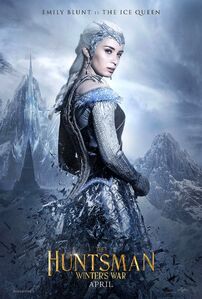 The Snow Queen in The Huntsman: Winter's War. 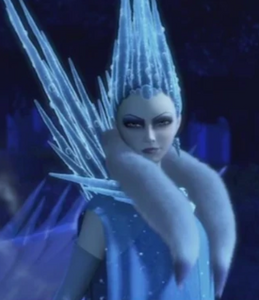 The Snow Queen in Barbie in the Pink Shoes, named Natasha. 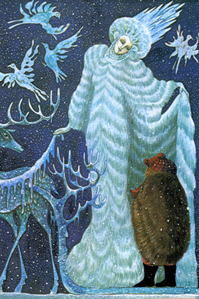 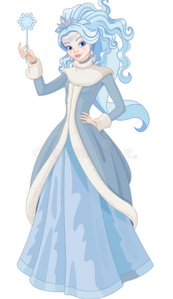 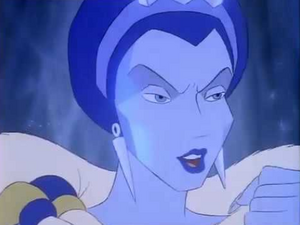 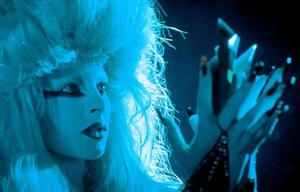 The Snow Queen in the 1986 Finnish film. 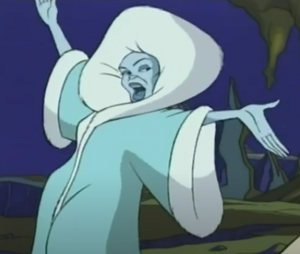 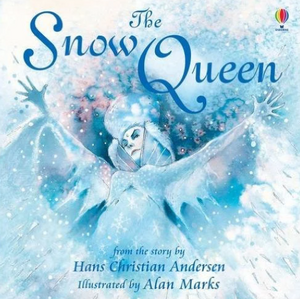 Retrieved from "https://villains.fandom.com/wiki/Snow_Queen?oldid=3817654"
Community content is available under CC-BY-SA unless otherwise noted.