Snow White, better known as The Evil Queen, is a character on ABC's Once Upon a Time. She debuts in the episode "Operation Mongoose" and is the main antagonist in an alternate universe where the heroes and the villains switch roles. Snow White becomes a villain when Regina tells a secret that has her true love killed.

She is portrayed by Ginnifer Goodwin.

This version of Snow White is based on both her fairytale counterpart Snow White and Once Upon a Time's Evil Queen. Her origin story is heavily inspired by Regina's in which her true love was killed, when Regina broke a promise to keep Snow's secret of James and was killed because of the girl's poor judgment which caused her to turn evil.

After Isaac rewrites everyone's stories in the Heroes and Villains book, Snow White rules the Enchanted Forest as the Evil Queen, who hates her stepdaughter Regina for telling a secret that resulted in her true love James' death. As a substitute, the Queen rips out the heart of James' twin brother, Prince Charming, so he is not only her lover but will do her bidding, though she is still unsatisfied with him. She then makes Prince Charming the official heartless Huntsman. At some point during this, she also locks up a woman, who calls herself the savior (who is really her daughter Emma), in a tower near the Bottomless Sea, with the Black Knight, Lily (daughter of Maleficent), guarding her.

One day, her underlings, the seven dwarfs, capture Isaac, who they suspect is a supporter of Regina as Queen. With an elegant flick of her wrist Snow uses her magic to open the door at the end of the hall, proceeding to enter the throne room. The Queen demands Grumpy speak and explains that Issac was found in the woods and presented her with proof of his treachery, a badge that says "Long Live Regina!" She then tosses it to one side without a care in the world, finally making eye contact with the man on his knees. Isaac tries to convince her he is on her side, and that a boy named Henry is trying to take away everything she has and continues in saying that the two of them want the same thing - to keep everything in this realm exactly how it is, with her in charge.

Snow White speaks into Prince Charming's enchanted heart, ordering him into the throne room, so he can execute Isaac. Charming calls Snow Your Majesty and she takes great pleasure in hearing this, then requesting with Charming's heart in her hand that he executes Isaac. However, Isaac saves himself by revealing his knowledge about why the Queen hates Regina, revealing that he knows who she truly loves - Prince James. He died because of the bandit Regina, and since his death she's been using his twin brother as a puppet, despite knowing he'll never measure up.

Snow is disheartened to be reminded of this and lets Isaac live and he claims learning all this from a magic book. The Queen wants to know how her ending can be happy and Isaac says that he knows exactly where to find Regina. When she asks what he wants in return, he asks her to kill Regina and Henry. He tells her that the boy he spoke of - Henry - will be trying to help Regina... he wants the Queen to kill them both. Snow White really smiles now. With blood lust etched upon her pale face, she responds with one simple word: "Gladly."

Intrigued by his encouragement to seek revenge against Regina, Snow White learns from him that Regina will ambush a royal carriage later. As promised, Regina attempts to steal from a royal carriage, only to find the Queen herself hiding inside and surprises her by stepping out. Snow orders her heartless servant to disarm the bandit. Snow caresses her nemesis' face, stating that she's been waiting so long for this moment and that Regina's head is going to look lovely in her trophy room. The Queen plunges her hand into Regina's chest, gripping the bandit's heart in preparation to rip it out and crush it to dust but is stopped by Charming suggesting that, before Regina's heart is ripped out, Snow ask her about the boy. While Regina tries reasoning with her about their past, Snow White demands the location of Henry, but the latter hesitates in answering.

Regina points out that Snow White had already lost one happy ending with all the killing she's done and will have no hope at happiness. The Queen reiterates that Regina knows nothing about her happiness and creates a fireball with magic and prepares to aim it at her, though Robin Hood distracts Snow White with a loosed arrow causing the tax carriage door to smack her in the face, and the fire is extinguished. Robin then rescues Regina leaping onto the back of his horse as he gallops by, escaping the Queen and her huntsman.

At the palace of Queen Snow White in the council room, the Queen is annoyed with her followers for not capturing Regina and Henry. She delicately places her gloved hands onto the edge of the table as she asks in a contradictory gentle manner where Regina's heart is. Grumpy blames the situation on the Blue Fairy for using her dark fairy dust to render his ax useless, which sparks wicked Granny to accuse him of being unable to take responsibility for his own actions. Before their argument escalates, the Queen claims not to be angry. She tells the council that since she is their leader, it's her duty to provide motivation to her followers. Snow White provides motivation by ripping out and crushing Doc's heart to show what will happen to another one of them if they fail again.

Hearing from her faithful Black Knight Lily that the prisoner she had locked up in her impenetrable tower has escaped, thanks to Henry - the boy she's after - and a pirate named Hook, the Queen tracks Emma down at the dock with Hook and demands the boy. Emma tries to convince the Queen and Prince Charming that they are her parents and the hope they instilled in her. For a moment, Snow White's tone changes and it appears Emma's power may still be intact to get through to her mother, but the Queen quickly turns the tables. She tells Emma that hope is a very powerful thing, which is exactly why she must crush it out of Emma and her dreadful son. The Queen commands the huntsman and her Black Knights to kill the "savior" and her comrades, daughter and grandson leading to a sword fight between Charming and Hook.

To ensure Emma and Henry's safety, Hook stays behind to fight, gaining the upper hand against Prince Charming. The Queen steps onto the scene, but she surrenders her arms when Hook points his sword at her instead. She begins stepping sideways, making it so that Hook has to turn on his heels to maintain an eye on her. When Hook threatens to do the same to Snow White, Prince Charming kills him, as Emma and Henry are forced to run. Snow White flares up a fireball in her hand with magic and throws it at Emma and Henry but they manage to get away in time, reuniting with Regina. Once Henry harnesses the quill and becomes the next Author, Isaac's stories are undone and everyone returns to their old lives in Storybrooke. 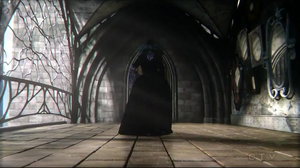 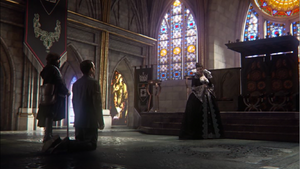 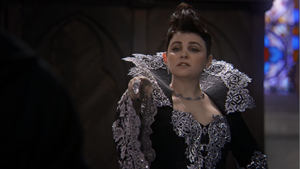 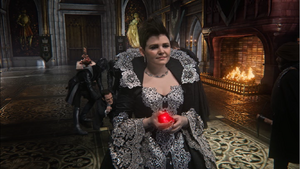 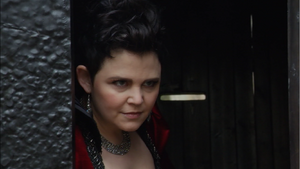 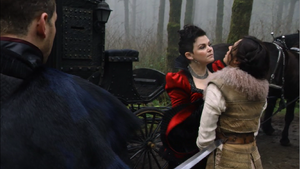 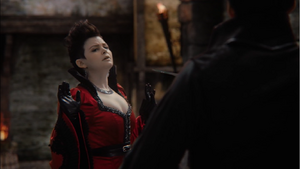 Snow feigns defeat when Hook holds her at sword-point. 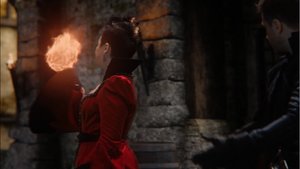 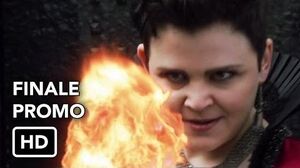 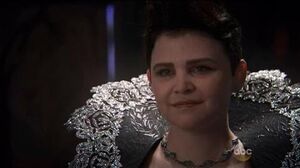 Once Upon a Time 4x22-Evil Queen Snow White 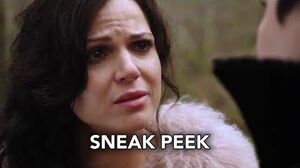