King Snowball
Sir
Ruffles (by Rick due to mishearing his name)

Large army of canines at his command

Take over Earth and get revenge on humans for how they have treated his canine kind (formerly).

Snuffles, briefly known as Snowball, is the titular main antagonist in the Rick & Morty episode "Lawnmower Dog". He is a small white dog who wears a blue collar and has black eyes with white pupils.

He was voiced by the legendary voice actor Rob Paulsen, who also voiced two of the Rowdyruff Boys (Brick and Boomer).

Snuffles was a dog adopted by the Smith family and in the episode he is first seeing annoying Jerry by staring at him blankly and urinating on the carpet. In a fit of anger Jerry shoves Snuffles' face into his own urine and Morty quickly comes to Snuffles' defence. Jerry then asks Rick if he could create a device to make the dog smarter which he reluctantly does by giving Snuffles a helmet which made him more intelligent. Snuffles begins to realise how humans are really treating his kind and becomes vengeful. He then realises by adding more batteries into the helmet he would become much smarter. He eventually develops himself a robotic suit and ends up convincing many other dogs to join him. He then adopts a new name (Snowball) due to Snuffles being his slave name. The dogs all manage to take over the human race after this. Snowball decides to make Morty his pet and to keep his testicles intact unlike the other humans. Supposedly one year later Rick reveals to Morty that they are actually inside of Snowball's dream and that he gave Morty a pill to make his kidneys shut down in order for his plan to succeed. Rick disguises himself as a dog who is also a surgeon and Snowball looks over terrified about what will happen to Morty and saying he'd give up everything to save Morty. Upon waking up Snowball decides to travel to another universe in order to start a new life for himself and the other dogs there instead of taking over their current one, he and Morty hug each other goodbye and depart.

Snuffles was initially a rather dimwitted puppy who was overly curious and constantly saddened by nobody in his family showing him any form of love or appreciation aside from Morty who Snuffles saw as the only person who truly cared for him.

After Jerry convinced Rick to make the device to make Snuffles smarter he became more self aware and began wondering about his treatment from humans, he tried to ask Jerry and Summer what happened to his testicles after being neutered but was left rather depressed when the two constantly misunderstood what he was saying, Snuffles then noticed the hatch on his helmet and realised that by adding more batteries to the helmet he'd become even more intelligent.

After gaining more intellect Snuffles became a vengeful misanthrope who despised all humans (with the exception of Morty) who was also rather insecure and sensitive over people referring to him by his previous name. After reforming Snowball returned to his kinder personality and decided to go with his people into another dimension in which he would become a benevolent ruler learning from humanity's mistakes.

Snowball is an adorable small, fluffy white dog with black beady eyes always staring blankly who wears a blue collar. He later wore a helmet which gave him more intelligence of which he later modified in order to speak intelligently in a way humans would understand. Snowball's final modification to himself added a giant robotic suit with wiring and short limbs which he could move with his own thoughts. 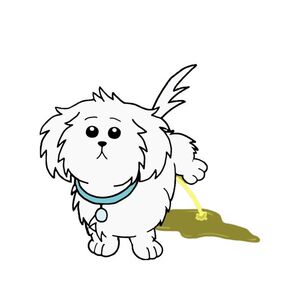 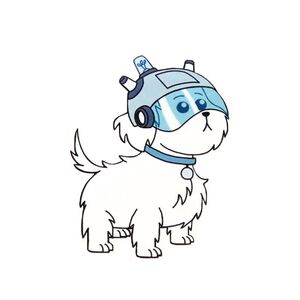 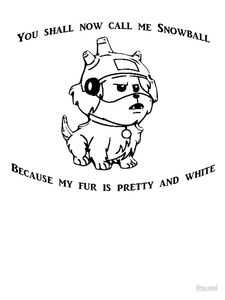 "You shall now call me Snowball because my fur is pretty and white." 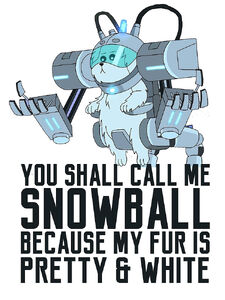 "You shall call me Snowball because my fur is pretty and white." 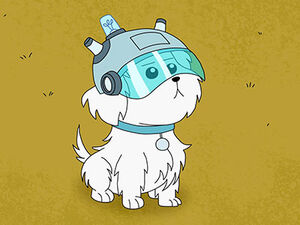 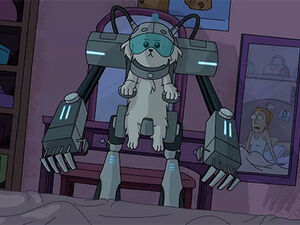