Carry out Shocker's "Japan Conquest Plan" and prevent the secrets of it from getting out.

Monster
Snowman is a Shocker Kaijin with the characteristics of the legendary yeti and an antagonist in episode 40 of Kamen Rider.

He was voiced by Michihiro Ikemizu.

Snowman was created by Dr. Shinigami to carry out his plan to erupt a volcanic area in Japan.

Snowman pursued Emi and Mika after they stole the "Japanese Conquest Plan" at the Shocker base in Switzerland, only to find they were working with Kamen Rider 1, who was fighting Shocker in Europe. He received a Rider Kick from Kamen Rider 1 but didn't explode and fought the Rider off.

Snowman then came to Japan with Dr. Shinigami to steal the Japanese conquest plan before it could bedelivered to Tobei Tachibana. Yuri, who was supposed to have a plan, is attacked, but Emi, who exchanged costumes with her, was kidnapped by mistake. Upon discovering this, an angry Snowman threw Emi down the cliff, but Kazuya Taki rescued her before she hit the ground. Snowman then faced Kamen Rider 2 and battled him by throwing huge rocks and ejecting magma.

However, when Kamen Rider 1 arrived from Switzerland arrived to aid 2, the tide of the battle reversed. With the cooperation between the two Kamen Riders, Snowman was forced back and received a Rider Double Kick, causing him to fall down the cliff and exploded.

Snowman was later one of the monsters reconstructed in the movie version "Kamen Rider vs. Shocker".

In addition to his super strength, Snowman, has the power to manipulate magma and can eject scorching magma from the ground with an earthquake, which is ironic considering his snow motif. 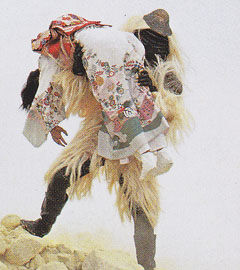 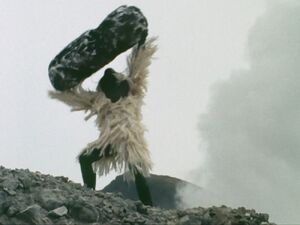 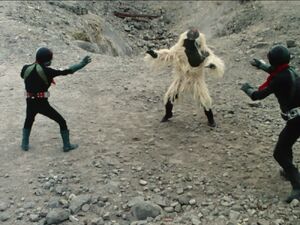 Snowman facing the two Kamen Riders.
Add a photo to this gallery

Retrieved from "https://villains.fandom.com/wiki/Snowman_(Kamen_Rider)?oldid=4187826"
Community content is available under CC-BY-SA unless otherwise noted.