Immediately after the events of Infinite Crisis, criminal mastermind Thaddeus Sivana joined Chang Tzu's Science Squad and relocated to Oolong Island. where he became one of the chief architects of the Four Horseman Project. Sivana took a crocodile from the Nile River and genetically altered him, transforming him into the Fourth Horseman Yurrd the Unknown (Famine).

Yurrd escaped from the facility with little knowledge of what he truly was. For six months he lived on his own, and eventually made his way back to the Sivana family estate. There, he met and befriended Amon Tomaz, a neophyte hero known as Osiris. Osiris named the crocodile man Sobek, after the ancient Egyptian deity. Sobek became an unofficial mascot to the Black Marvel Family and Black Adam invited him to accompany them to the sovereign nation of Kahndaq. Sobek never left Osiris' side, and was present when the young hero lost control of his emotions, accidentally killing the Suicide Squad member known as the Persuader.

Several months later, Sobek's true nature revealed itself. As the avatar of Famine, Sobek's presence caused a great blight across all of Kahndaq. Even the elemental powers of Isis proved ineffective as crops continued to wither and die. A massive hunger consumed Sobek, and he gave in to his preternatural instincts as Yurrd. He betrayed Osiris and savagely attacked him, biting him in half with his massive jaws. Soon after, Yurrd was joined by his fellow Horsemen and attacked the Black Marvel Family. However, Yurrd became the first Horsemen to die at Black Hand's hands in which his jaws was hyper-extended. At some point, Black Adam later skinned Yurrd's body and turned him into a pair of boots.

But the destruction of Yurrd's body had not destroyed the essence of Yurrd. In time, Yurrd resurfaced in Bialya, possessing the body of Taylor Reese, a Wayne Enterprises employee overseeing refugee operations in Bialya and was selling food on the black market to a local warlord. After killing Reese's employees, he was confronted by Bruce Wayne, and induced hunger into the human industrialist, but Wayne was able to control himself. After Superman arrived, Yurrd escaped when he induced several of Reese's guards with hunger in which forces Superman and Wayne to dispatch the guards.

Escaping, he met up with his fellow Horseman Azraeuz, who raised the dead of Bialya to serve as a work force to serve their needs. After making a mound of earth and corpses, Yurrd and the other Horsemen had the dead build them bodies able to house their essences. The Justice League of America attempted to destroy them by throwing a chunk of ice at the mound, but this ignited the firepit and resurrected the Four Horsemen. Now in the form of a hyena, Yurrd attacked n Superman. However, even while infected from Zorrm's pestilence, Superman managed to hold his own against Yurrd, even breaking the beast's nose at one point. Finally, Superman took Yurrd into orbit and back again, defeating him. Denied a means to act, Yurrd abandoned his body and tried to possess Batman. However, Yurrd could not control Batman, for his desire for vengeance was greater than Yurrd's hunger was. Veronica Cale, who had overseen the Four Horsemens' rebirth, swallowed a crystal intended to house their spirits, and removed Yurrd's essence from Batman, trapping him and the Horsemen for the time being.

Hunger Control - Famine has the ability to cause wide-spread hunger in the area around him. He has shown the ability to effect entire countries with this abilities. He can make their hunger become so strong, that they turn to cannibalism. The downside of this power is that he is always hungry.

Super Strength - Famine has some degree of super strength, but to what degree is unknown. He was able to fight Black Adam for a short period of time, so we can assume that it is above the 50 ton mark.

Possession - Famine can possess another person and control whatever they do. The only way he can possess someone, is if they invite him. Whether they are aware of the invitation or not does not matter. 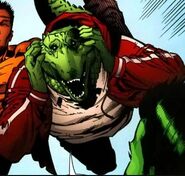 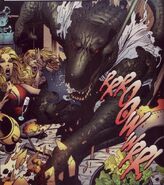 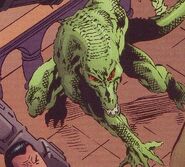 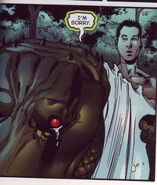