Manipulating others (most prominently Gordon and Cobblepot).

Gain the trust of Oswald Cobblepot.
Usurp Oswald Cobblepot and destroy the "Pax Penguina" (both succeeded).
Prove herself to her father (failed).
Kidnap Martin to use against Oswald Cobblepot.
Kill her father.
Become the uncontested ruler of Gotham's criminal underworld.
Make Jim's life miserable (all succeeded, for a while).
Kill Jim Gordon and the Penguin (failed).

Sofia Falcone is a major antagonist in the TV series Gotham.

She appears as one of the three main antagonists (alongside Ra's al Ghul and Jerome Valeska) of Season 4 and a mentioned antagonist in Season 5. She is the series' adaptation of the DC comics villain of the same name.

Initially appearing to be an ally to detective Jim Gordon in his attempt to prevent Oswald Cobblepot from expanding his criminal machinations throughout Gotham, Sofia is eventually revealed to be just as as evil as Cobblepot himself, if not more. According to her plans with Gordon, she starts gaining Oswald's trust, only to manipulate him to her own gain. Once Cobblepot discovers this, Sofia uses her criminal expertise to cause Cobblepot to be arrested. By killing her father as well, Sofia emerges as the queenpin in Gotham with her rule unchallenged thus far. However, she was later shot in the head by Leslie Thompkins, though is presently comatose rather than dead.

She was portrayed by Crystal Reed.

Sofia was born inside the criminal Falcone family. She was the only daughter of Carmine Falcone and the sister of a unnamed brother and Mario Falcone, later Calvi. While Sofia grew up, she did not experience much warmth from her father, who was busy leading his criminal empire. However, Sofia still managed to get a good look behind the machinery of Carmine's criminal network. When she was 13 years old, Carmine sent Sofia away from Gotham in to prevent her from being corrupted by the city. Instead, Sofia tended to Carmine Falcone's businesses in the southern US.

About 10 years later, Sofia learned that her brother Mario was killed by Jim Gordon in Gotham City.

Years after Carmine has fled Gotham himself and has moved to Miami, he is visited by Jim Gordon. Gordon reveals to him that Oswald Cobblepot has basically taken over the city and has created an era of crime which he calls "Pax Penguina". Gordon wants Carmine to return to Gotham, because under Carmine's rule the city was treated fairly - with Carmine being an honorable old school gangster. However, Carmine reveals that he is dying as he cannot come back to Gotham again. Sofia (who has joined the two) claims that she will head to Gotham instead but Carmine forbids it, claiming that she is not ready for Gotham. Nevertheless, she installs herself as a power in her own right in Gotham, and begins an on-off romance with Detective Jim Gordon. She is instrumental in helping Gordon arrest the serial killer Professor Pyg, and pulls strings to make sure he is promoted to Captain, displacing his friend, Harvey Bullock.

Sofia and Cobblepot open an orphanage together, and she befriends Cobblepot as part of a plan to take over his empire. However, he finds out about her treachery with the help of one of the orphans, Martin, and declares war on her. She retaliates by kidnapping Martin, but Cobblepot fakes killing the boy to keep him safe. Cobblepot goes to Carmine and tells him what Sofia has done, and Carmine reprimands his daughter and orders her to leave Gotham. Moments later, however, rival gangsters gun Carmine down and wound Sofia.

It is ultimately revealed that Sofia planned the hit, and that she hired Professor Pyg as part of a plan to install Gordon as head of the GCPD and put both him and the police under her control. Gordon kills Pyg and tries to arrest Sofia, but she persuades him that, if he puts her in prison, she will reveal how he became Captain, and his career and everything that he has fought for will be undone. Later, when Cobblepot is arrested for Martin's supposed murder thanks to treacherous underling Victor Zsasz, Sofia is left uncontested ruler of Gotham's criminal underworld.

Sofia as the new queen of Gotham orders Leslie Thompkins to give her 30% of the profits from the Narrows. Leslie refuses and tries to negotiate to give her information on Gordon's crimes. Sofia refuses and her men kill Lee's men with a planted gun, after which she breaks Leslie's hand with a hammer and throws her on the street. Jim, who realizes what has happened, vows to defeat and stop Sofia. She is later shot in the head by Lee which puts her in a coma, possibly permanently.

At first appearance, Sofia appeared to be, unlike her family members, a kind, caring, selfless, polite, respectful and naïve young woman and far more honorable than her father as she appeared to have hold no grudge against Jim Gordon for killing her brother Mario, stating that she was fully aware that he was infected by the Alice Tetch virus and that Jim "did what he had to do". Sofia also came across as a strong, manipulative, intelligent and calculating with the appearance of an innocent woman. She appeared to also be remorseful and guilty when seeing her father's remaining loyalists being murdered by Victor Zsasz in order to gain Oswald Cobblepot's trust, showing that she indeed to have a moral compass.

However, after Cobblepot's downfall and her father's death, it was revealed that most of these traits were nothing more than a façade in order to hide Sofia's true nature. Despite stating that she understood Jim's reason for killing her brother, her campaign in Gotham was nothing more than a vendetta to avenge him, no matter how many deaths it would take to achieve it. Although, while it is never shown of her relationship with her brother, it is assumed that it was a caring one, but however, given her true personality, it is possibly another façade as she showed no remorse after breaking one of Leslie's hands despite her being her sister-in-law.

In truth, Sofia is an emotionally and mentally unstable psychopath and is completely immune to guilt, as her true nature shows traits including immorality, egotism, selfishness, hypocrisy, sadism, and ruthlessness. She also appeared to have no regard for the safety of children as she was more than willing to kidnap a child that Cobblepot was fond of and place him in danger in order to draw him out (that said she did appear to be shocked when Oswald blew him up). Her delusional hypocrisy goes as far as to kill her own father as when he refused to allow her to rebuild his criminal empire, she simply thought of him being ungrateful. Thus far, her hunger for power pushed her far enough to have him killed in order to claim his place as the leader of his empire.

In addition to the above, Sofia has a sense of smugness and arrogance, reveling in outsmarting, outplaying, and outmaneuvering others and with both words and body language making clear her sense of superiority over others, such as when she viciously mutilated Lee Tompkins and then had her thrown into the streets just to be spiteful. Her arrogance and overconfidence, however, is what proved to be her ultimate downfall, for she made a lot of enemies who would later unite against her and hunt her down.

One of Sofia's most notable traits is how delusional she truly is as she tries to defend her actions of killing her father, believing that he brought it upon himself. This is despite the fact that while Carmine did mistreat her, it was only after she disobeyed him and got involved with Mario's killer. That said, it is possible that she ordered a hit on him because she felt he had no respect for her. 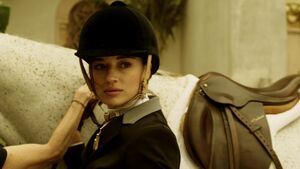 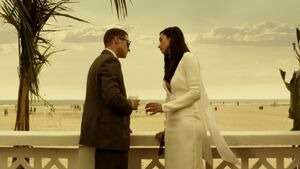 Sofia talking with Jim Gordon at the beach. 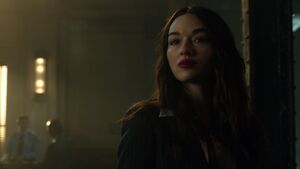 Sofia showing herself at GCPD. 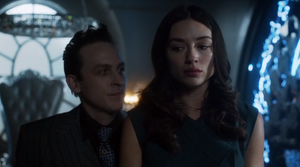 Sofia talking with Oswald Cobblepot for the first time. 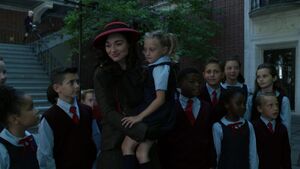 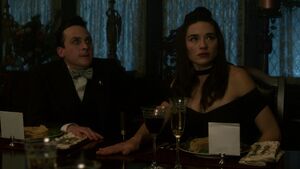 Sofia and Oswald's faces after being forced by Pyg to open envelopes. 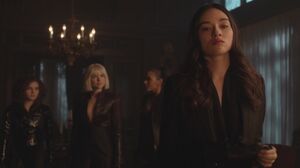 Sofia telling a proposition for The Sirens of Gotham. 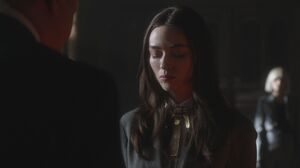 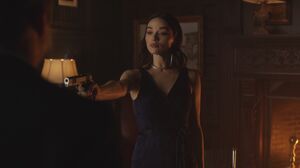 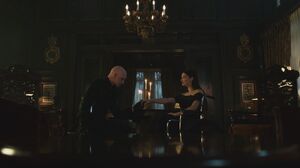 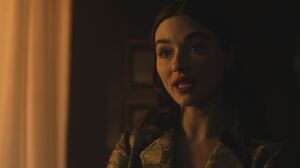 Sofia trying to force Jim Gordon to release one of her employees. 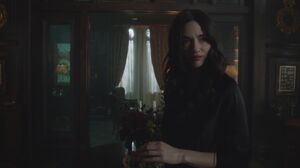 Sofia telling Leslie that she wants 30% of the profits from the Narrows. 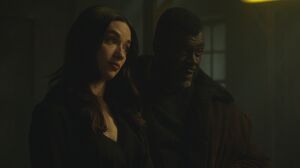 Sofia appointing the new leader of the Narrows and get rid of Leslie Thompkins. 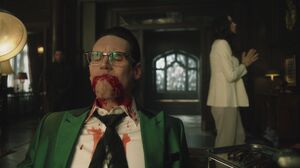 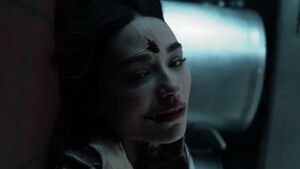 Sofia somehow falls into a coma. 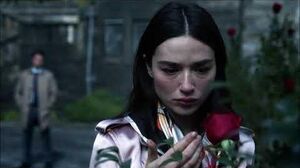 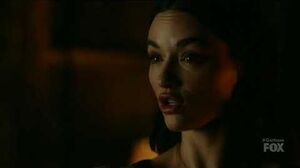