Leader of the Marauders

Use Eden Sinclair as leverage to cross the wall to Glasgow, Scotland, allowing his gang to start their invasion of England

Sol is one of the two main antagonists (other being Marcus Kane) of the 2008 post-apocalyptic film Doomsday.

He was portrayed by Craig Conway.

Sol was the leader of group of survivors who are marauders who live in Glasgow, Scotland in 2035. In the year 2008, a virus called the "Reaper Virus" has infected Scotland and the British government put a wall around Scotland to prevent the Reaper virus from infecting England.

Sol was a vicious psychopathic man who was once apart of another group of survivors, led by Marcus Kane, who is his father and a former scientist who at the time the Reaper virus infected and killed a lot of the population of Scotland was trying to find a cure. Sol has a sister named Cally, who came to Glasgow to talk to Sol and she was held captive by him.

Sol and his group are cannibals and will eat another human for food, he has a girlfriend named Viper, a woman with a Maori tattooed face. Sol hated his father and never believed a lot of things his father said, especially about there being nothing beyond the wall, the wall that the English government put around Scotland to prevent England from getting infected with the Reaper virus. A team beyond the wall was sent to Scotland to find a cure for the Reaper virus that has infected London. The team, led by Eden Sinclair arrived in Glasgow to find Marcus Kane and a hope for a cure. Sol's people ambushed some of the team members at the abandoned hospital and some of the remaining survivors of the team were captured, including Eden Sinclair. Only 2 of the team members, Sgt. Norton and Dr. Stirling escaped.

Sol went to Eden Sinclair's holding cell and tortured her for information about where she came from and she revealed to Sol they came from beyond the wall and Sol realized he was right that Kane lied to him and his people all this time and he wants to lead his people to the "promised land". Sol leaves the cell and orders the guard to keep Eden alive.

Sol goes to a gathering and he makes an announcement to his followers and dinner about to be served. One the members of the team, Dr. Talbott, gets roasted alive by Viper and after he is cooked alive, start cutting him up and pass out pieces of the roasted Dr. Talbott to to people as they feast on him.

Meanwhile, Eden Sinclair escapes from her cell and fights Viper with some swords. Sinclair kills Viper and decapitates her, with the help of Cally, who is in a cell and grabs on to Viper's head and Sinclair kills her. After Sinclair and Cally escape, Sol arrives at the cellblock and is really infuriated and yells "FIND HER!!"

Sol and some of his marauders chase Eden Sinclair, Cally, Sgt. Norton, and Dr. Stirling to a train depot and they escape on a train with the help of Cally's friend Joshua to find Marcus Kane.

Sol is later on seen driving after Eden Sinclair, Dr. Stirling, and Cally, who just recently escaped from Marcus Kane's domain. Sol is driving a car, with the dead Viper, with her severed head taped to her body and are trying to get Sinclair. Sol is killed by saw blades, launched from an old bus and he is decapitated.

Sol is last seen with his head being taken back to Glasgow by Eden Sinclair and she tells the marauders "If you're hungry, try a piece of your friend" and they cheer her on as their new leader. 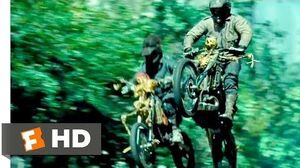 Doomsday (2008) - Murdercycles and a Murder Bus Scene (6 10) Movieclips
Add a photo to this gallery
Retrieved from "https://villains.fandom.com/wiki/Sol_(Doomsday)?oldid=3785626"
Community content is available under CC-BY-SA unless otherwise noted.