Assist Kannagi in obtaining the SOLU.

Mutated Minion
Solaris is a member of Foundation X and a supporting antagonist in Movie War Mega Max. She is one of Lem Kannagi's two subordinates and uses a Zodiarts Switch to transform into the Unicorn Zodiarts.

She was portrayed by Sanae Hitomi.

Solaris accompanied Kannagi and Katal on their mission to recover the SOLU from the meteorites that crashed to Earth. Despite encountering resistance from the Seven Legendary Kamen Riders, they were able to successfully obtain the substance. However, as they were transporting it they were intercepted by Shotaro Hidari as Kamen Rider Joker. Following a struggle with Kamen Rider Joker, they lost the SOLU when it was knocked into a sewer.

After the SOLU morphed into a girl named Nadeshiko Misaki and was found by Gentaro Kisaragi and the Kamen Rider Club, Solaris posed as a university researcher and approached the club asking for the SOLU to be returned to her. The Club all agreed to hand it over except for Gentaro, who stole the SOLU jar and set Nadeshiko free. Solaris then showed her true colors when she attacked Gentaro and had her goons kidnap Nadeshiko before driving away with her in a van. Gentaro chased her and Katal down as Kamen Rider Fourze and managed to stop the van, but Kannagi then appeared and turned Nadeshiko into the SOLU Switch before escaping.

After Fourze met up with Kamen Riders OOO and Double, the four of them were approached by Solaris and three other Foundation X researchers. All four of them assumed Zodiarts forms to battle the Kamen Riders, with Solaris becoming the Unicorn Zodiarts. While Fourze and OOO went on ahead, Double stayed behind to battle the Zodiarts. Solaris was defeated by Kamen Rider Double CycloneJokerXtreme's Bicker Charge Break Maximum Drive, which knocked her out of her Zodiarts transformation. What happened to her after is unknown. 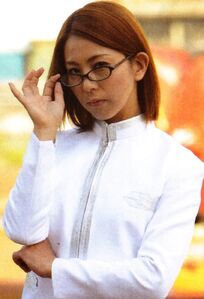 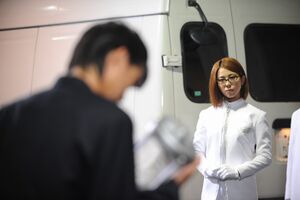 Solaris as Gentaro rescues the jar of SOLU containing Nadeshiko.