Patron deity of the city of Soleanna
4-dimensional being

Being worshipped by the Kingdom of Soleanna.

Punishes those who would transgress against him.
Warping reality.
Embracing fire and light.
Devouring time and space.

Erase all of existence by consuming all timelines and dimensions.

Bring about the Day of Disaster (both failed).

Solaris, also known as the Sun God and the Flame of Hope, is the overarching antagonist and final boss of Sonic the Hedgehog (2006). It is an all-powerful and immortal sun god whose goal is to erase all existence by devouring all timelines. Throughout most of the game, it was split into two halves, Mephiles the Dark and Iblis.

Solaris initially existed as an apparently living flame which was praised and beloved by the citizens of the coastal city-estate/nation of Soleanna as their patron deity. Nothing is known about Solaris' origins, other that he had been "entrusted" to the Soleannean royal family ruling over Soleanna and its people at some point in the past and had remained under the protection of them and within the bowels of the former Soleannean royal palace in Kingdom Valley for an unpresented amount of time.

In the Soleannean culture, the Kingdom of Soleanna held an annual holiday called the "Soleanna Sun Festival" to honor their god as they celebrate with lights, fireworks, and ceremonial dancing. The final part of the festival begins and ends with members of the Soleannean royal family, accompanied by religious Soleannean priests in yellow hooded robes, offering prayers to Solaris with hopes of bright and prosperous years for Soleanna as they lit the city's treasured stone monument called the "Altar of Light" (also called the "Altar of Flame") in the centre of the city square.

During the reign of the Duke of Soleanna, the Duke conducted an experiment on the sun god, known as the Solaris Project, in order to gain and use his powers to both allow humanity to correct its past sins, and also to allow himself and his daughter Elise, so she could see her mother once again. Once Solaris' flame had grown significantly large enough, the Solaris Project was initiated, leading to several experiments being performed on Solaris. However, during one such experiment, Solaris became unstable, ignoring the Duke of Soleanna's pleas and split into 2 evil entities: Iblis, the raw power and Mephiles, the cunning conscious mind. Mephiles was sealed into an artifact known as the Scepter of Darkness by the time-traveling Shadow the Hedgehog, while the Duke was forced to seal Iblis inside of Princess Elise's soul. Before dying from wounds caused by the accident, he told his daughter to grow up to be a strong queen who would never cry as doing so would destroy the seal on Iblis which is said to bring about the Day of Disaster upon its awakening.

Mephiles was eventually freed and he began plotting to reunite with Iblis. He made Princess Elise cry by killing Sonic the Hedgehog, thereby releasing Iblis and the two beings whose fusion empowered by the magical energy of the Chaos Emeralds, joined to form Solaris again. Solaris immediately plunged the world into darkness and prepared to devour time itself by consume all existing timelines. Before he could achieve this, however, he was defeated by a combined assault from, Super Shadow, Super Silver and a resurrected Super Sonic, where the heroes and their allies managed to defeat Solaris by destroying his consciousness. Solaris' defeat reverted him back to his original form, the "Flame of Hope", and spirited Elise and Sonic back to before the fateful experiment. After some contemplation, Princess Elise chose to blow out the very radiant fire that would become Solaris and thus change history by erasing his corporeal form from existence.

Prior to the Solaris Project, Solaris was nothing more than a tiny, pearly white, flicking flame. After his 2 halves Mephiles and Iblis fused together, Solaris took on a more creature-like form, a hawk-like, skeletal apparition, recognizable from the Soleanna royal crest worshipped as sacred by the citizens of Soleanna for countless years. During the battle against him, Solaris' main body is revealed to be a rather simple figure: He has a large and transparent body made of pure light, with a red orb that is his consciousness/core in the center of his body. He has no head, his upper body only includes the top piece above his core, with a curve behind his "neck", and his lower body resembles a stalactite. He has 3 fingers on each claw-like hand with no visible palms, and his arms are not connected to his body at his shoulders.

In Solaris' first form, he is a incandescent, vaguely half-humanoid figure, with rocky cladding on its arms. He has three shells of light covering his body, giving him a more complex appearance. He has one shell covering each of his upper arms, and one main shell on his body. The lower part of the main shell covers his "chest" area, as well as his core, and the top part of it has a figure, resembling an eagle head with glowing yellow eyes and antlers. This makes it look like Solaris actually has a head. On his back he has a ring with 6 triangular pieces "attached", making it resemble a sun.

In his second form, Solaris is a seemingly-skeletal, hawk-like spirit. While in this form, he loses his light shells, exposing his main body. On his back, he now has a long plate, with a set of wings "attached", where each wing is made up of 5 segments.

Along with the Time Eater, Solaris is one of the most powerful villains that Sonic himself has ever faced. Along with possessing several godlike traits and powers, it took the combined might of the Super forms of Sonic, Shadow, and Silver in order to defeat him, and even then, they could not actually destroy him. As another testament to his enormous strength, Solaris is one of the few beings seen that has been able to injure someone in a super transformation through sheer force.

As a 4-dimensional being, Solaris exists in the past, present and future simultaneously, making him omnipresent throughout time and virtually impossible to defeat, unless he is attacked simultaneously in all time periods.

Solaris possesses the ability to create, control, and even destroy the entire fabric of reality. According to Dr. Eggman, Solaris is capable of devouring entire space-time continuums on an incomprehensible scale, encompassing entire dimensions and timelines. He can also create rifts within the time-space continuum which come in 2 variants: black orbs that can suck objects into oblivion as if they were black holes, and red orbs that can hurl meteors of condensed matter with such force that they can bypass the invulnerability granted by a Super State.

Solaris is capable of energy projection, being able to fire energy blasts so great that they can bypass the invulnerability granted by a Super State. When projecting energy, Solaris can fire it in the shape of both large laser beams and purple orbs that will follow the opponent until it hits. In his second form, Solaris demonstrated the ability to generate an almost impenetrable shield of light that can block any attack and which can only be bypassed when Solaris himself attacks as he has to put it down to launch his own attacks.

Much like his 2 halves, Iblis and Mephiles, Solaris' physical body appears to be immortal and indestructible, as he easily came back, fully revitalized, after his first defeat by Super Sonic, Super Shadow and Super Silver. His only weak point is his red core that is his consciousness, which is still vulnerable to attacks. By destroying it, it would still leave Solaris' body intact, but he would be unable to use it.

Solaris is also capable of at least limited shapeshifting, allowing him to assume new and stronger physical forms, as seen when he changed the sun-like appendage on his back into wings and became even more powerful.

According to Princess Elise and Dr. Eggman, Solaris also possesses pyrokinetic abilities, which is further enforced by his relationship to Iblis, a semi-sentient fire spirit. 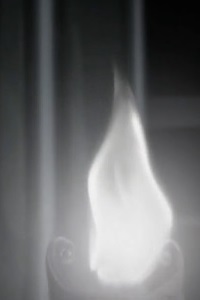 The Flame of Hope 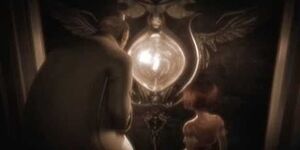 The Duke of Soleanna and his young daughter Princess Elise the Third, both looking at the Flame of Solaris. 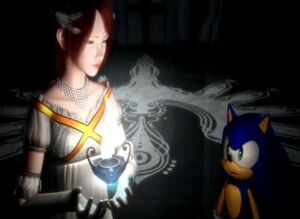 Sonic the Hedgehog and Princess Elise the Third with the Flame of Solaris. 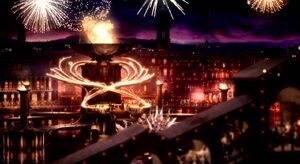 The Altar of Light, dedicated to the worship of Solaris.