NOTE: This article is about the incarnation of Soldier Boy from the comics. To read the article on the TV series incarnation, see here: Soldier Boy (TV Series).

Having sex with Homelander.

Become a member of The Seven.

Kill Billy Butcher and The Boys (both failed).

Soldier Boy is a minor antagonist of the controversial comic book series The Boys. He is the leader of the superhero group Payback and aspires to be a future member of The Seven.

The mantle of "Soldier Boy" was actually created by Vought used by two supes in the past. The most popular version is the Soldier Boy who fought during World War II, led a superhero group called The Avenging Squad, and destroyed enemy tanks. This version of Soldier Boy caused a massacre of both his team and American soldiers he was supposed to assist. As a result, he was killed by George Mallory.

In the present day, however, Vought made the public to believe that Soldier Boy is one single individual who never aged but in reality, the supe who is the current Soldier Boy is far weaker than his predecessor as well as naïve and cowardly at times, being intimidated by his fellow Payback member Stormfront and urinating himself whenever faced by much more powerful forces than him. However, he has big aspirations to join The Seven despite being the selected leader of Payback.

Due to his naiveness and blind aspirations, he is regularly taken advantage of high-tier superheroes to either do their dirty work or please them sexually, particularly Homelander who promises him a spot in The Seven in exchange for a sexual relationship with him. He has a habit of reciting the name of states while engaged in battle. In an attempt to defeat The Boys and please Homelander, he battles with Billy Butcher only to have his nose bitten off and is eventually subdued, kidnapped and tortured to death by The Boys.

In the comics, Soldier Boy is a cowardly and naïve individual who mindlessly sucks up to other well-known superheroes. It seems that he let other supes, mainly Homelander, to use him as a sexual tool in order to please them, so that he could get a spot in The Seven. He is also dimwitted as he could not see the truth that Homelander was mainly using him for sex and has no plans to induct him into The Seven. 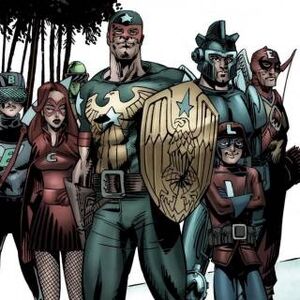 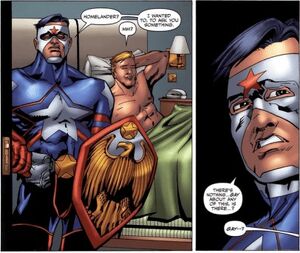 Soldier Boy after having sex with Homelander. 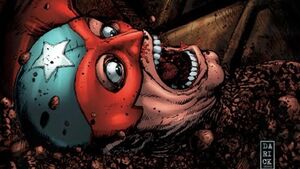 Soldier Boy being crushed by tank.