Animatronic guard of the Roundabout

Assist Zeebad in his quest of collecting the three diamonds (formerly).

Soldier Sam is the secondary antagonist of Pathe's second full length animated feature film The Magic Roundabout/ Pollux Le manege enchante (and its redub Doogal), the 2005 film adaptation of the TV series of the same name.

He is an animatronic grenadier guard of the roundabout itself where Zeebad was imprisoned and later became the latter's former right-hand man into finding the three enchanted diamonds for Zeebad to freeze the sun with.

In the original French release, he was voiced by Gérard Jugnot and in the English dub, he was voiced by Ray Winstone, who also played Arnold French in The Departed, George McHale in Indiana Jones and the Kingdom of the Crystal Skull, Ares in Percy Jackson & the Olympians: The Lightning Thief, Admiral Orlock in Killzone 3, Bad Bill in Rango, Tubal-Cain in Noah and General Dreykov in Black Widow.

In Doogal, he was voiced by Bill Hader, who also played Professor Richard Impossible in The Venture Bros., Agent Haggard in Paul, Hansel in Hoodwinked Too! Hood vs. Evil, Guy Gagné in Turbo, Doctor Malocchio in The Awesomes, King Leonard Mudbeard in the Angry Birds movies and the Bloodbottler in The BFG.

At first, Sam had no real-life apart from a sentient object which was part of the roundabout itself guarding Zeebad. However, when Zeebad escaped after Dougal accidentally crashed a candy cart into the roundabout, Sam was launched near where Zeebad had landed. Upon finding Sam, Zeebad decided to make him his minion, which he does so successfully. From now on, Sam, under Zeebad's command, would then follow his master for finding the three enchanted diamonds. The two managed to get the first two until later after a heated train chase, the train exploded which launched the two. Zeebad was fine due to him having been in a safer area on the train, but Sam was mortally wounded which prompts Zeebad to leave him to die.

However, Sam, having had a change of heart as he suddenly remembered his original life, returned riding on an elk which Zeebad had previously cursed earlier by turning its fur blue. Sam then confronted Zeebad as he tells him everything that included Sam being on the roundabout and the one guarding Zeebad. Zeebad easily froze the elk when it charged towards him, launching Sam towards him. Zeebad then struck him with an ice blast, but he then noticed Sam's chest glowing.

He then realised that the third diamond was inside Sam the entire time and took it out of Sam, killing him. At the end after Zeebad's defeat, Zebedee picked up Sam's lifeless body and brings him back to life by putting his diamond back inside him, telling Sam that he is going back where he belonged. Sam nodded in agreement before being put back in his original position on the roundabout guarding Zeebad. 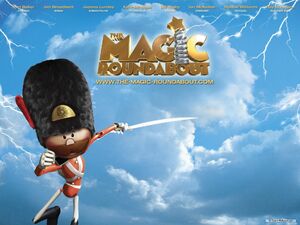 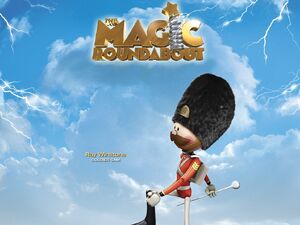 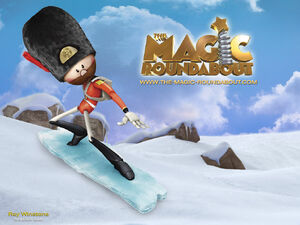 "The cow and the snail. Classic romance."