Use of sharp weapons

The Soldiers, or the Mongols, are the posthumous overarching antagonists of Pixar's 25th full-length animated feature film Turning Red. They were the evil Mongol army responsible for the film's events.

They were only seen in a flashback when Ming Lee tells her daughter Meilin about their invasion. The army were heading towards Sun Yi's village to kill her and her daughters, having previously slaughtered all of the village men. One night when the Gods granted her wish, Sun Yi became the giant Red Panda and fought and defeated the Soldiers as well as protecting her daughters.

Despite their deaths, the soldiers were still responsible for the film's events as their attack and attempted murder on Sun Yee and her daughters were what caused her to become the Red Panda and pass that gift onto her daughters, and eventually Mei and Ming Lee. 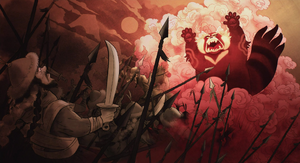 All of the Soldiers getting killed by Sun Yee as a giant red panda.