Villains Wiki
Register
Don't have an account?
Sign In
Advertisement
in: Infobox Update, Categories Needed, Fist of the North Star Villains,
and 10 more

Solia is a minor villain in Fist of the North Star. He is one of the two practitioners of Gento Koken along with Falco.

Years ago, he had fought in a sparring match with Falco and lost an eye.

Kenshiro first confronts Solia's army on his way to meet Bat and Lin. Solia announces his intentions to kill Hokuto rebels. He demonstrates to Kenshiro that his abilities are like circles and uses the Gento Ryurin Kozan to cut at Kenshiro's frontal. Solia then believes his opponent will be more of a baby in the presence of Falco.

Having recognized Solia's name, Kenshiro hopes will give his blabber to the demons in hell. While Solia attempts to fire his Ha no Rin at him, Kenshiro stops the attack, breaking off the purple Gento Koken user's left arm.

Now down to his right arm, Solia attempts to finish Kenshiro with his right hand acting like a blade, but the Hokuto Shinken user dodges. As he goes for a second hit, Kenshiro pummels Solia with a Hokuto Hyakuretsu Ken. As he stands up, he declares that he gave his life for Falco, confident about his chances before his body explodes.

In the anime, it is Solia who destroys the monument to the Hokuto and Nanto fighters and kills the elder of Mamiya's village. When Kenshiro arrives to save Mamiya's village, Solia shows he attacked the village to lure his rival there. During the fight, Kenshiro takes out Solia's right arm. After a hard fight, Solia then says the Celestial Emperor would never forgive Kenshiro and that all of Gento Koken will hunt him down before he dies.

Solia's usage of Gento Koken emits a purple light that will cut the cells of others. 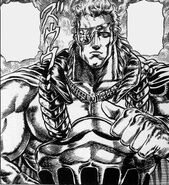