Former president of the United States

Leader of the Sons of Liberty

Trying to crush the Patriots.

Kill Raiden to acquire his nanomachines.

Use Raiden's nanomachines to Destroy the Patriots.
Be immortalized in history as a revolutionary who fought for America's liberation, akin to his idol George Washington.

Solidus Snake (real name: George Sears) is the third and only perfect clone son of Big Boss and the main antagonist of Metal Gear Solid 2: Sons of Liberty.

He was voiced by the late John Cygan in English, who also played Hedley in Treasure Planet, Twitch in Toy Story 3, and the Mugger in The Cleveland Show. In Japanese, he was voiced by Akio Ōtsuka, who also voiced Solidus's "father" Big Boss in the later Metal Gear Solid games.

Solidus Snake was created in 1972 by the Patriots in the Les Enfants Terribles project as the third of the "Sons of Big Boss". The first phase of the project produced two clones, Solid Snake, who possessed Big Boss' supposedly inferior genes and Liquid Snake, who had his superior ones. Their creation resulted in Big Boss leaving the Patriots, so they needed a new figurehead, one that would be a perfect copy of Big Boss. Since neither Solid nor Liquid Snake were identical to Big Boss, they created Solidus, who had a perfect balance of Big Boss' dominant and recessive genes. He was genetically and almost physically identical to Big Boss, which he took great pride in. Like the other clones, Solidus' genes were altered so he aged at an accelerated rate, but even faster than that of Solid and Liquid Snake. This let him become the figurehead the Patriots wanted very quickly and the limited life-span acted as a fail-safe in case Solidus turned on them or was captured.

Solidus participated in the Liberian Civil War when he was only a teenager in the late 80s to early 90s. Determined to see whether or not he truly was someone else's creation, Solidus killed the parents of a 6-year-old boy. He adopted and named the boy, calling him Jack, who became part of the Small Boys Unit. He proved to be one of Solidus' best child soldiers and gained an amazing kill record to the point that he became the platoon's leader at 10 years old. After the war was over, Jack disappeared, leaving Soldius to wonder what had happened to him for quite some time.

Sometime later, Solidus was given the name "George Sears" and in 2001, became the 43rd US president thanks to the Patriots. It was during his time in the White House that he created Dead Cell, a special-forces unit in the US Navy. Solidus' administration was noted for its stance on nuclear disarmament and anti-eugenic policies. In 2000, the national missile defense program was on the verge of collapse due to failed trials, but Solidus' intervention saw the program succeed. In 2005, he entered negotiations with Russia to try and get a revision of the ABM treaty since the national missile defense program violated that treaty. Solidus wanted the revision signed particularly so that he would be remembered throughout history since his term would soon be over.

While Solidus was negotiating with Russia, he acted outside of the Patriot's orders, having come to hate them. He secretly brought about the Shadow Moses Incident, having gotten his agent, Revolver Ocelot, to manipulate Liquid Snake into stealing the newly developed Metal Gear REX. Solidus' plan was to have Ocelot steal the data on REX and on the nuclear warhead it was to be armed with, which he could then use against the Patriots. However, they countered this by using Snake and the FOXDIE virus to eliminate FOXHOUND and leave REX undamaged. An unforeseen event came up regardless after the Secretary of Defense, Jim Houseman, ordered an air raid on Shadow Moses Island when Snake destroyed REX. Solidus arrested Houseman and repealed the orders as well. After the Shadow Moses Incident ended, Revolver Ocelot, who was the only survivor of FOXHOUND, reported all that had happened to Solidus. He reported that he'd killed the DARPA chief since he knew what Ocelot had really been up to and that Solid Snake killed Liquid. Ocelot also reported that the FOXDIE inside Snake was due to be activated soon, indicating the Patriots planned to kill him with the FOXDIE. He then complimented Solidus on being a well-balanced individual and as the perfect son of Big Boss, was worthy of ruling the world.

Fallout with the Patriots

The existence of Metal Gear REX and the Genome Soldiers were revealed to the public after the Shadow Moses incident, thanks to a book written by Nastasha Romaneko about what happened on the island. Humiliated, Solidus resigned from his presidency and learned that his superiors planned to eliminate him as punishment. He went into hiding with help from Ocelot, who put the information on REX on the black market, causing it to spread worldwide. Solidus began preparing to rebel against the Patriots, allying with Sergei Gurlukovich and his army of mercenaries, as well as Dead Cell, who had now gone rogue.

Under the name, the Sons of Liberty, Solidus lead his forces in a takeover of the Big Shell facility, an offshore clean-up facility in the Lower New York Bay. He assumed the identity of Solid Snake, who was apparently dead, and planned to take control of a highly advanced warship, Arsenal Gear, which was being built in the Big Shell. Solidus also captured president James Johnson, who was on an inspection tour, but eventually started aiding Solidus of his free will though he finally turned on the son of Big Boss. However, Solidus and Johnson were actually being manipulated by the Patriots. Raiden, a special-forces operative, was sent in, supposedly to stop the terrorists, but it was actually part of the Patriots' S3 Plan. After Fatman tried to blow up the facility, almost ruining everything, Solidus grew suspicious, thinking that Fatman was actually a Patriot plant. He made Ocelot do a recheck on Dead Cell's background files and later had to stop a fight between Ocelot and Olga Gurlukovich, reminding them he took them both in when no one wanted them. Solidus eventually confronted Raiden as he was trying to save President Johnson and identified him as the Patriots "messenger", though he was certain he'd seen Raiden somewhere before. However, the real Solid Snake attacked Solidus from a Kasatka helicopter and confronted him. As the two exchanged words, Raiden realized who they both were and Snake commanded Solidus to stop pretending to be Big Boss. Solidus successfully avoided Snake's gunfire thanks to his exoskeleton armor and the enhanced abilities it granted him. Eventually, Snake knocked Solidus off of the bridge with a shot from a grenade launcher, however, he landed on the wing of a jet piloted by Vamp. He entered the copilot seat and took on the Kasatka, but Raiden successfully shot down the jet with Stinger missiles. As the jet hurtled to the ocean, it was caught in the jaws of Metal Gear RAY before it could crash. With his left eye lost in the battle, Solidus made Vamp escape, before he sealed the cockpit and allowed RAY to carry him to safety.

Solidus later captured Raiden, who he realized was his lost adopted son, Jack, and that Raiden's memories may have been altered by the Patriots. Solidus revealed to Raiden that he was his son and his past as a child soldier, which Raiden wasn't happy to remember. At first, it seemed that Solidus was planning to use Arsenal Gear to blow up a nuclear warhead over New York City, thus exposing the Patriot's existence. The blast would release a large electromagnetic pulse, stopping Wall Street in its tracks and sending the Patriot's control of the business community crashing down, causing worldwide panic. Solidus would then turn Manhattan into a new Outer Heaven. But he eventually revealed his true plan, that he was going to turn Arsenal Gear over to Dead Cell once he had gotten the identities of all the Patriots from its optic neural AI, GW. Dead Cell would proceed to get the Patriots attention, while Solidus would hunt down all the Patriots, killing them one by one until all twelve were dead. During all of this however, Solidus was scooping around to, believing that one of his troops was a Patriot spy. He eventually found out that it was Olga Gurlukovich. He managed to capture her, and shoot her in the face, killing her.

However GW was corrupted by a worm cluster and Revolver Ocelot, actually a Patriot spy, interfered, causing the plan to fail. He'd actually orchestrated the whole incident and Solidus was chosen due to his relationship with Raiden, which was similar to that of Big Boss and Solid Snake. Solidus was left with his back to a wall and when Ocelot, having become overcome by Liquid Snake's personality, crashed Arsenal Gear into Manhattan, Solidus and Raiden were thrown onto the roof of Federal Hall. Solidus explained his true intentions: since he'd been unable to have his own children and continue his legacy, he wanted to be remembered forever in the pages of history. The Patriots immense control of information would prevent this from ever coming to be. Solidus went on to explain why he had launched the Big Shell Takeover and his plan to kill the Patriots. He also admitted to Raiden that he had killed his parents so as to see if they were someone else's creations and compared their situation to that of Liquid Snake, Solid Snake, and Big Boss. Solidus told Raiden he needed to kill him since he had only one method he had left of finding out who Patriots were, the nanomachines inside Raiden's brain and the nerve pattern they had made.

Solidus and Raiden engaged each other in a final battle, a battle that Solidus lost, getting a large part of his spine severed by his "son" and falling from the roof. He crawled towards the statue of George Washington, reaching out to it as he died.

Solidus was left "brain dead" and what was left of him was recovered by the Patriots, eventually being put to use in a transplant surgery for Big Boss. His metabolic processes were kept going via life-support and provided optimal opportunities for the transplant. EVA, who'd received Solidus' remains, renamed herself Big Mama and formed the Paradise Lost Army, using Solidus' head and chest as a dummy version of Big Boss' body. In 2014, Liquid Ocelot stole Soldius' DNA from the Paradise Lost Army to access the Sons of the Patriots system. His remains were finally destroyed when Vamp threw him into a boat fuel fire.

In Super Smash Bros. Ultimate, Solidus Snake appears as a primary grab type spirit that can be fought in a spirit battle against Snake on Shadow Moses Island that becomes faster at high damage with a Killing Edge equipped as well.

Unlike his "brothers", Solidus Snake greatly and hypocritically respects Big Boss, attempting to fashion himself after his father. However, he lacks the important traits that his "father" and Solid Snake had, their sense of honor and loyalty, compassion for their enemies or anyone who betrays them. Solidus also greatly desires to be remembered in history, since he can't leave a legacy through offspring. He holds American ideals at heart and wants to recreate America in a similar manner to George Washington. 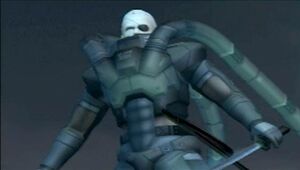 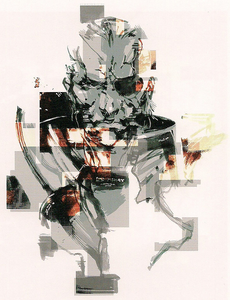