Kill Hiryu to restore his reputation as the strongest.

Solo is a recurring enemy in the Strider series of video games, appearing in all versions of the Arcade game and all its sequels. He also appears in Strider Returns for the Mega Drive and Game Gear, although under the name Inferno.

Solo is a bounty hunter and assassin for hire with a reputation for being the strongest, a fact reflected on his name "Solo", which is meant to reference that he's alone (solo) at the top as the strongest human being. Solo is a lone wolf-type that cares for no one and nothing and only trusts himself and two things in life: money and the weapons held in his hands.

In the first Strider game, Grandmaster Meio contracted Solo's services to eliminate Hiryu after he brought down the higher ups at Kazakh. Solo first ambushed Hiryu, as he was making his way through the Siberian Wilderness, but was easily defeated. Later, in conjunction with fellow assassins, the Kuniang Martial Arts Team (Tong Pooh and her sisters), Solo engaged Hiryu aboard the Sky Thunder MK II, as the former was trying to hijack the ship. Hiryu confronted and defeated them all at the same time. Solo returns for a final confrontation in the Third Moon, Meio's base. Unable to best the Strider for the last time, Solo is sliced into pieces.

In Strider 2, Solo became the pioneer for Light Sword Cypher's "Superhuman Army" project, whose success led to the mass production of the "Solo Type" killer robots. He was hired alongside the Kuniang M.A Team, most likely by the Light Sword Cypher organization, to aid the Chinese mafia in an attack on Neo Hong Kong.

Word reached his ears of a single Strider going around the city, defeating everyone that came across his path and he became intrested on seeing what this Strider was capable of. After detecting him on top of the city's whealthy district, he decided it was time to engage. He fought Hiryu in a weaker form inside a giant satellite dish, but was easily defeated and retreated to a nearby rooftop. After seeing first hand what Hiryu could do and determined to stop his advance, Solo powered up his armor's energy rings and his weapon to full strength. However, this is still not enough to defeat him, and he is forced to retreat after his armor starts malfunctioning.

Solo appeared once again to welcome Hiryu at the entrance of a rebuild "Third Moon" base, in company of several of the mass produced "Solo Type" robots, looking for a rematch to settle the score. Even with the help of the weak gravity in the area, Solo and his drones were unable to overpower Hiryu and were destroyed for good.

In the 2014 Strider, Solo still acts as an independent bounty hunter. As a man who only believes in himself, his existence could be considered a "shadow" to the Special-A Class Strider Hiryu, who carries out all his assigned missions to their end. Although his services are definetly not cheap, once he's paid, Solo will carry out his request, regardless of how dangerous it might be.

Solo is first seen in a meeting with General Mikiel, where they discuss Hiryu's recent intrusion in the city and the defeat of Pei Pooh. While Mikiel remains confident the Four Winds will defeat him, Solo is certain that even if they were to take on him the three together, they'd stand no chances. At Mikiel's suggestion he might be worried they would "steal his prize", Solo simply responds he's "awaiting the inevitable" and leaves. Shortly afterwards, he's contacted by Mikiel again. He recieved orders from Meio, who had decided it was time to contract his services, at which he remarks to him that he should have done that earlier, seeing how "prices have gone up". Mikiel states money is not a problem as long as Hiryu is exterminated, and sends Solo the contract, which is promptly signed.

Solo engaged Hiryu on the rooftop of the Military Ring's fortress, unleashing his many weapons and attacks at him, while taking occasional pauses to either mock his performance as he expected better, or laugh maniacally. In the end, Solo is unable to kill Hiryu and he falls down the fortress engulfed in flames.

That, however, was not the end for him. Through the technical prowess of Meio's Army, the heavily damaged Solo was brought back to life with even more upgrades and weapons than ever, changing his name to Solo ZN-2. These upgrades didn't come without a cost. Having his pride wounded by his first defeat ever combined with the forceful revival process, Solo's mind was slowly starting to rot. His sole purpose was to have his revenge on the strider who made him suffer.

Catching up with Hiryu inside the Balrog's Gravitron chamber, he admits to have underestimated him during their first encounter, but this time, he would kill him without fail. And so began the final battle, where Solo unleashed even more crazed and violent attacks. His reckless fighting damaged the Balrog's core considerably, and when Hiryu claims victory Solo's flight system sent him crashing against the Gravitron, bringing down the entire ship down with him.

Solo works as an assassin and bounty hunter for hire. He uses a reinforced armor called a "Fighting Suit" which allows him to fly at incredible speed across the sky, leaving several after-images as he moves around. Solo is an expert in the use of long-range weaponry including high-caliber firearms, explosives and laser-based weapons, in stark contrast to Hiryu's mastery of martial arts and close-range sword techniques. He changes weapons in each of his appearances.

In the original game Solo wields a large cannon called a Giant Flamethrower, with incredible dexterity despite the weapon being longer than his arm. The Giant Flamethrower can shoot powerful laser beams and fire beams, and has a missile launcher installed on top as well. He uses a handgun as a secondary backup weapon to shoot while flying, and can release missiles from his armor.

In Strider 2, his armor was completely redesigned into an exo-skeleton suit, making him even tougher than before. His new main weapon is a plasma cannon known as the "Impact Cannon", a powerful spear-shaped weapon with two blades on its sides, giving him more firepower. He can also release spinning sharp discs of plasma known as Halo Wings from his shoulders.

In the Strider 2014 remake, Solo wears a lesser exo-skeleton with separate jetpack for flight, something which leaves him more vulnerable against larger attacks. However, he can cover his weakspots with an enhanced flight system, which allows him to fire while flying, ram his targets at high speed and use an energy shield which protects him from devastating attacks. His new weapon is the Laser Rifle, a rifle capable of shooting plasma beams and lasers in different configurations. He also employs powerful floating mines.

As Solo ZN-2, he brings back the flamethrower from his original appearance.

Solo is a lonely bounty hunter who believes in three things: himself, money and the weapons he's currently holding. He's a ruthless and dangerous killer, who takes pride on being unmatched and will do anything to ensure he gets properly paid after completing his client's request. He seems to be calm and calculated, always trying to lay down a perfect strategy to utterly annihilate his target. He's a consummate professional that doesn't take contracts personally and completes them no matter how dangerous or dirty they are.

He also considers himself to be Hiryu's rival and believes they are destined to fight, but his skills are leagues below Hiryu's level. Solo takes great pride on his status as the strongest and on the fact that in his entire career he has never been defeated in battle nor missed a contract after being hired, so once Hiryu defeats him he invariably makes it personal and becomes obsessed to fight Hiryu a second time to settle the score and reclaim his wounded pride. 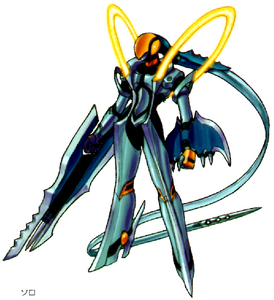 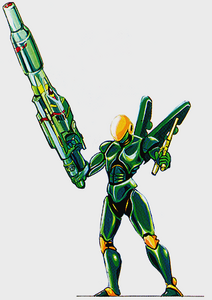 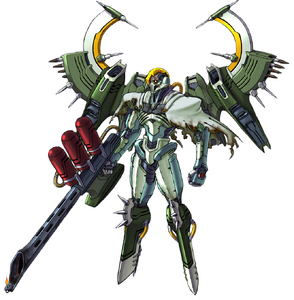 Solo's revived form, ZN-2, from the Strider 2014 remake
Add a photo to this gallery

Retrieved from "https://villains.fandom.com/wiki/Solo_(Strider)?oldid=3759977"
Community content is available under CC-BY-SA unless otherwise noted.