Solomon Grundy is a supporting antagonist in the 2013 DC fighting video game, Injustice: Gods Among Us.

He is the undead monster who was previously a merchant named Cyrus Gold, but resurrected as an extremely strong, dangerous and indestructible zombie. Following the destruction of Metropolis, Solomon Grundy was brainwashed by Superman into the faithful servant of the Man of Steel.

He was voiced by Fred Tatasciore, who also voiced Bane in the same franchise.

In the past, Cyrus Gold was a wealthy merchant that had a relatively safe life in Gotham City. However, a group of criminals would kill him and dump him in Slaughter Swamp.

Many years later, his body would be imbued with its vegetation, thus being resurrected as the zombie-monster Solomon Grundy. His name being a reference to the nursery rhyme, he would become a constant enemy with the Green Lantern, Batman, and members of the Justice League.

Solomon Grundy is first seen in the bowels of Arkham Asylum, being contacted by Harley Quinn, who promises to turn the dampeners that are keeping him contained off, in return for destroying the Asylum. As Harley releases the inmates, Grundy bursts from the floor, chanting his namesake nursery rhyme as he grabs hold of Robin and drags him back under the Asylum, ignoring the combined attacks of Superman, Wonder Woman and Green Arrow as he does.

Grundy is still holding Robin by his head while Wonder Woman stabs his upper arm, though this only prompts the beast to backhand her with enough force to send her through several walls. Grundy begins to return his attention to Robin when he sees his wrist begin to smoke before falling off. Staring dumbly at his smoldering stump, Grundy turns around in time to see a grinning Superman just as the Man of Steel smashes through Grundy's chest in a spray of gore. This seemingly fells the monster, but only for a few moments.

After Nightwing frees Robin from the zombie's severed hand, Batman arrives and Grundy revives. Robin and Nightwing are ordered to return to the Asylum above while Batman charges towards Grundy, leaping over him and slamming two explosive devices onto the sides of his head. As the Dark Knight lands, they detonate, decapitating the monster and finally subduing him.

Though not seen, Grundy is moved to the location Superman had been planning.

Solomon Grundy resurfaced, having been dormant for years. Grundy came into the possession of the Toyman and was being transported in a box truck when it was commandeered by Hawkgirl. Grundy escaped from his imprisonment and began causing havoc, attracting the attention of Superman and a Superman impostor.  The two Superman, disagreeing on who was the real Superman, began fighting each other while simultaneously fighting Grundy until Yellow Lantern stepped in. Grundy caused Bizarro to escape, and Superman, in return, ripped Grundy's head off from his body.

Superman brought Solomon Grundy's torso and detached head to Lex Luthor and ordered his friend to find a way to turn the regenerating monster into an asset for the Regime.

Solomon Grundy is seen attacking Green Arrow, Green Lantern, and Wonder Woman from the main universe at Wayne Manor along with Killer Frost. Grundy mainly attacks the Green Arrow but is hit and shot with arrows multiple times by him. Grundy is defeated, but quickly recovers to attack the Green Arrow and Green Lantern arrives to attack him and take him as far as possible from them. After Killer Frost is defeated by Green Arrow, Hal Jordan returns to claim that Grundy was taken to orbit from space, later Insurgency Batman arrives with the duplicate Aquaman telling the others that Grundy is a zombie and that he will be fine.

Grundy is seen again in the Fortress of Solitude when the Yellow Lantern orders him to remove the body of the late Shazam. In the Wonder Woman chapter, he reappears along with the other members of the regime, invading the secret hideout of the Insurgency and in the attack on Gotham City along with Killer Frost.

In the epilogue, Solomon Grundy is is shown being apprehended and loaded into a prison-vehicle, along with the rest of Superman's accomplices. 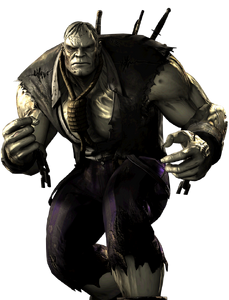 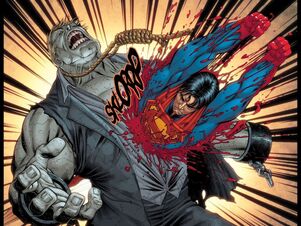 Retrieved from "https://villains.fandom.com/wiki/Solomon_Grundy_(Injustice)?oldid=4327272"
Community content is available under CC-BY-SA unless otherwise noted.