The Man In Glasses

Kill the British Prime Minister (failed).
Kill Ethan Hunt and his IMF team (failed).
Create a new world order based on unstoppable sequences of accidents and terrorist attacks and turn the entire world into a massive terrorist superpower (failed).
Blow up several powerful explosives in order to destroy the world (failed).

He was portrayed by Sean Harris, who also played Stretch and Jungler, as well as the kidnapper and serial killer Mr. Kidd in A Lonely Place to Die.

Solomon Lane is a former MI6 agent who went rogue and after Atlee created The Syndicate, a mysterious international and powerful terrorist organization consists of former government agents who faked their deaths, betrayed their countries and became his assassins and operatives. Lane is bent on killing Ethan Hunt and his IMF team so they won't be able to stop him from creating a new world order based on unstoppable accidents and terrorist attacks that will actually turn the entire world into a massive terrorist superpower.

Agent Ethan Hunt of Impossible Mission Force is convinced that he can prove the existence of the Syndicate, an international terrorist consortium consist of former government agents and well-trained killers. Reporting to an IMF substation to receive his orders, the Syndicate reveals their existence to Hunt, as Lane infiltrated the substation to capture him. Hunt is rescued by Ilsa Faust, a disavowed British MI6 agent and an operative for The Syndicate who offers no explanation for her actions. With their existence confirmed, Hunt begins following his only lead: a blond man in glasses who oversaw his capture.

Six months later, Hunt leads a CIA team to an empty safe-house as a means of passing new information on the Syndicate to his friend and an intelligence specialist Benji Dunn. Suspicious of Alan Hunley's actions and believing he will capture Hunt at the first opportunity, William Brandt recruits former agent Luther Stickell to discreetly find Hunt, using a likeness of Ilsa found at the safe house. Hunt arranges for Benji to attend an opera in Vienna, recruiting him to take part in a covert mission to locate the man in glasses. Realizing that the Syndicate plans to assassinate the Chancellor of Austria at the opera, Hunt intervenes by shooting him before the Syndicate can. Escaping with Ilsa, one of the intended shooters, he is powerless to prevent the Chancellor from being killed by a car bomb put in place as a redundancy.

Ilsa partners with Hunt and Dunn to locate a file hidden by a Syndicate traitor on a high-security server used to regulate a Moroccan power station. Believing it to be a ledger containing the names of all Syndicate agents, the trio secure it before Ilsa betrays Hunt and Dunn. She returns to London, passing the file on to her handler, Chief Atlee. However, Atlee discreetly erases the file, forcing Ilsa to return to the Syndicate and prove her loyalty to its supreme leader, Solomon Lane, who Hunt knows as the man in the glasses.

Regrouping with Brandt and Stickell, Hunt and Dunn follow Ilsa back to London, where they debate the nature of their work.

Having betrayed one another so many times, they can no longer be certain of their own loyalty, question what to do next as they cannot be sure that Lane has not anticipated and moved to manipulate them. When Dunn and Ilsa are abducted by Lane's men, Hunt realizes that Lane will always have his plan to acquire the files and that the only sure way to stop him is to force a confrontation with him. He agrees to Lane's ultimatum to abduct the British Prime Minister and use his voice print to unlock the file.

Disturbed by this turn of events, Brandt contacts Hunley and reveals their location. Hunley arrives at a charity auction to try and prevent Hunt from attacking the Prime Minister, and take him with Brandt and Attlee to a secure room. Having posed as Attlee, Hunt reveals himself and he has the Prime Minister confirm the existence of the Syndicate: a top-secret project that sought to recruit disavowed foreign government agents to carry out clandestine missions; an initiative that the Prime Minister opposed as too extreme. When the real Atlee arrives, Hunt subdues him, and he admits that Lane hijacked the project for his own ends and went rogue, which Atlee has been covering up its existence ever since. Atlee is arrested and is taken into custody.

Stickell discovers that the file is not having a ledger of known agents, but contains the locations and access codes for billions of dollars in untraceable funds that Lane has been desperate to get to keep the Syndicate active for decades. Hunt memorizes the data and destroys the file to force Lane to release Dunn and Ilsa in exchange for what he knows. He lures Lane out into the open and into a trap set up by Stickell and Brandt. Imprisoned in a bulletproof cell, he is gassed and taken into custody and the Syndicate is dismantled once and for all. 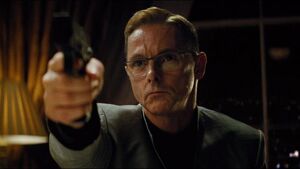 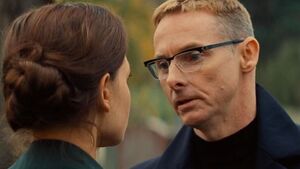 Lane shoots at his archenemy, Ethan, and nearly kills him. 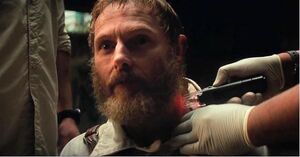 Solomon Lane in Fallout, being interrogated by the IMF.

Lane drowning in Fallout.
Add a photo to this gallery

Retrieved from "https://villains.fandom.com/wiki/Solomon_Lane?oldid=2693599"
Community content is available under CC-BY-SA unless otherwise noted.