Something the So and So is the minor antagonist in Wander Over Yonder. He is probably the most incompetent villain in show.

Something the So and So is quite timid, cunning, indecisive, pusillanimous, and easily discouraged, so he has very low self-esteem which is quite apparent when in the spotlight, making him seem rather pathetic and Alexander Gould. Despite these tendencies, he seems to be a competent villain who had enough guts to take over two planets on his own.

Although he is an incompetent villain, he has demonstrated no notable abilities and doesn't even have any minions under his control.

In Skullship, Lord Hater was having a conference with his watchdogs over the predicament with their position on the Galactic Villain Leaderboard. Currently, Lord Dominator was on top having gained control over a large number of planets in record time. Hater believed that Commander Peepers meant close to the top behind himself, but Peepers pointed out that they was not even in the top 10 and was way below in 45th place with only one measly planet in their control. Peepers advised that in order for them to regain some credibility, they must focus on stealing planets from other villains so that they could climb their way back on top. Their first task would be capturing General McGuffin 's impenetrable fortress using an elaborate multi-part plan, so Peepers must have Hater's undivided attention. Hater did so but then Wander popped out of nowhere and tags Hater declaring that he was "it".

Peepers was alarmed at what Wander had done and covered his eye, waiting for the inevitable rage, but took a peek and saw his leader calmly waiting for his plan. Confused, Peepers asked why he hadn't flipped out, and Hater replied that he wouldn't let silly games distract him from conquering the galaxy. Glad to see that Hater is finally focused, Peepers began to lay out his plan for breaking through the fortress defenses. Hater, however, was having a difficult time ignoring the spot that Wander touched and it grew into a maddening urge for him to tag someone. Hater saw a nearby watchdog and attempted to discreetly tag him until Wander declared that the conference table was home base, causing all the watchdogs to claim it. Hater tried to order a watchdog named Berry to remove his hand but it refused to do so, forcing Hater to make all the watchdogs remove their hands from the table by electrocuting it and tags one, but the watchdogs ended up tagging each other in a circle causing Hater to be "it" again. Hater tried to tag the watchdog again but Wander made a rule of no repeating tags. Enraged and frustrated, Hater looked around for someone he hadn't tagged and saw only one person left: Peepers. He sneaked up on him but got caught before tagging him. He hastily left saying that he had to use the bathroom and Peepers looked outside, seeing his boss chasing after multiple watchdogs in a game of tag. He sighed dejectedly and asked one of the watchdogs to let Hater tag him for the sake of the mission but they suggested that he should do it. He reluctantly did so after calling them "a bunch of babies".

Peepers went up to Hater while he was chasing the watchdogs and volunteers himself to be tagged. Hater thanks him and tried to tag Peepers, but the commander unintentionally refused to be tagged, not wanting to be "it". Peepers turned around, hoping that if he didn't see himself being tagged, it would work. However, he bailed out at the last moment, causing Hater to chase him all across the ship from the food court to the torture chambers. Their chase ended up in the cold room and Peepers managed to completely freeze his boss in Coldburnite, except for his tag finger which was wriggling constantly. Peepers decided to unfreeze him after completing the plan to capture Macguffin's base. After Peepers left Hater alone, Wander showed up and sat in front of the frozen conqueror, saying that he now had his undivided attention.

Peepers and a squad of watchdogs began to infiltrate the fortress and stealthily made their way towards the force field generator to sabotage it. While they was at it, Wander irritated Hater with anger therapies like hobbies and sing-alongs, causing his rage to reach volcanic proportions, just enough to break free from his Coldburnite prison. With the game of tag still going, Wander ran away from Hater who had gone completely berserk and chased him outside the ship and towards the fortress. Peepers's squad reached the control room and was about to bring down the shield until the alarms went off, and they discovered that Hater tripped them while wildly chasing after Wander. Peepers got caught by General Mcguffin who, in his pajamas, demanded to know what is going on. Wander popped up saying that Lord Hater was "it", causing the general to be wide eyed at the news about Hater, who promptly barged in yelling "TAAAAGGGG!!!" while foaming at the mouth. In a panic, Macguffin ordered his men a hasty retreat as they totally abandoned the fortress. Peepers stared dumbly at this and thought of a new devious plan: to use Hater's position as "it" to drive away the villainous competition.

Then Peepers, using Hater, who is still berserk, chased away the other villains infron their planets and took the planets for themselves. Among those villains they're; Something the So and So, O'Yojimbo, Gentleman Tooth, and, in deleted scenes; Iggy Starbeam, Knight Mare and Night Mayor. Planet after planet was conquered and Hater gained more and more pegs in his climb to the top of the leaderboard ladder, until finally they reached the top 10. Peepers and the watchdogs celebrated their success with Hater, who was exhausted from his tag-induced rampage. In the moment of victory, Hater high-fived a nearby watchdog, unintentionally making him "it". The minion realized the power he had now and left the watchdogs while screaming "I have the power!". In a few seconds, Hater's position on the leaderboard was overtaken by the newly tagged watchdog. Peepers sighed and said that he would make plans to defeat their newest rival villain: Ted from accounting. At that moment, Wander began a game of "got your nose" with Hater and caused him to chase him. Peepers argued that he didn't have a nose, but Hater replied that that was because Wander obviously stole it just now. Peeper then sobbed in defeat as his boss was once again distract ed by Wander's antics and Sylvia comforted him, saying that "it's not going to be okay".

Later, in the Battle Royale, Something the So and So was the first one to reach the Ring of Invincibility but he completely messed up his speech, resulting in Emperor Awesome telling him to go away and come back when he was better prepared.

More later, in "The Matchmaker", Something the So and So confronted Wander and Sylvia for the first time in hopes of doing something evil to them and the Yonder Galaxy, but just like before, he fumbled his speech and became uncertain about what to do. Either destroy them, do something with lasers or use galactic trains to somehow torment the galaxy. Wander then calmly went up to him and confessed that normally he would waste 11 minutes stopping or helping Something the So and So but due to his schedule he simply asked him if this was really what he wanted to with his life. The confused villain then began to question his career choice and became unsure to the point where he decided to give up and said goodbye to Wander and Sylvia.

Because Lord Dominator had said in "My Fair Hatey", that she imprisoned all the villains in the Yonder Galaxy| except Lord Hater, it is supposed that Somethung the So and So was imprisioned & escaped too.

Something the So and So is seen in "The End of the Galaxy", to aid Wander and a group of rebels to fight Lord Dominator.

Something the So and So sad 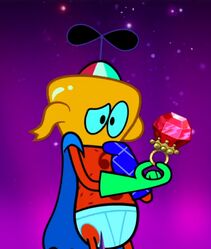 Something the So and So with a jewel 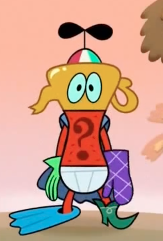 Something the So and So on his planet

Something the So and So "The Suprise Villain"

Something the So and So worried
Add a photo to this gallery
Retrieved from "https://villains.fandom.com/wiki/Something_the_So_and_So?oldid=3674005"
Community content is available under CC-BY-SA unless otherwise noted.