Member of the Black Fang

Sonia Reed (ソーニャ・リーダス Sonia Reedus) is a major antagonist in Fire Emblem: The Blazing Blade. One of Nergal's morphs, she adopted the young mage Nino and married Brendan Reed of at his request. With the latter action, she allowed Nergal to transform Brendan's guild, the Black Fang, into his own personal assassins.

Sonia is a beautiful young woman with long hair that reaches her thighs and full red lips. She has the characteristic black hair, pale skin, and golden eyes of all morphs. Sonia wears a long black sleeveless dress with matching gloves and high-heeled shoes, a red sash, and a golden belt. Around her head is a golden circlet.

As one of Nergal's greatest morphs, Sonia views herself as such a perfect specimen, she deluded herself into believing that she is a genuine human being. As such, she frequently derides her fellow morphs as "refuse", particularly the similarly high quality Limstella, who Sonia considers a mere puppet. Sonia's narcissism extends to most genuine humans as well, as she believes that treating them as equals will only lead to failure. This attitude lead to Sonia's abhorrent treatment of Nino. Sonia obeys creator Nergal, but her ego occasionally leads her to disobey direct orders to obtain personal glory.

She enjoys the flattery of others like Brendan and Ursula's, but happily betrayed and killed Brendan whilst mocking him for thinking he loved her and quickly dismissed Ursula as refuse for failing her. She is extremely cruel, even to children as shown by her killing Nino's preteen brother, Kai, and her constant abuse of Nino leading to her trying to murder her. She also emotionally manipulated Nino, claiming she would give her a motherly hug if she succeeded in her mission, whilst secretly ordering Nino to be killed regardless of her success.

Sonia was one of many morphs created while Nergal hid in Bern, having been exiled from Arcadia for his dangerous experiments with quintessence. He quickly viewed her as one of his masterpieces, and often declared that she was a perfect being. This spoiled Sonia into a very narcissistic individual with delusions of grandeur. When Nergal discovered a family of powerful magic users in Lycia with knowledge of dragons, he chose her to assist him with "extracting" their information.

Sonia chose to do this by pretending to be a pauper, resulting in the family taking her in out of sympathy. Sonia then took the family's son, Kai, hostage and forced the pair to give her all she needed to know. Once the pair were no longer useful to her, Nino killed Kai anyhow and then murdered the couple when they were no longer useful. Sonia was going to kill the couple's infant girl and sole survivor, Nino, as well, but her boss, Nergal stopped her.

Nergal recognized Nino's potential to be a powerful mage and ordered Sonia the sole survivor to raise and educate her to be a mage. Detesting the girl, Sonia always told Nino she was a failure and deprived her of an education, disobeying Nergal's orders out of her pride.

While Sonia "raised" Nino, Nergal recognized the potential of Bern's assassin's guild, the Black Fang, in furthering his ultimate goal of opening the Dragon's Gate of Valor. Sonia was ordered to ingratiate herself with the Fang's founder, Brendan Reed, and proved to be a better seductress than mother. With Brendan and Sonia's marriage, Nino was exposed to a much kinder father and brothers in Lloyd and Linus Reed. However, with her new position in the Fang Sonia had numerous members covertly killed and replaced with morphs. With these actions, Nergal slowly assumed de facto leadership over the Black Fang.

Under Nergal's orders, the Black Fang began to sow discord in Lycia with the goal of gathering quintessence from the ensuing rebellion. While the nobleman Darin eagerly assisted the Lycian Rebellion, Elbert of Pherae opposed Nergal's plotting. For both their dissidence and possession of potent quintessence, Elbert and his knights were secretly imprisoned in Valor. Elbert's disappearance led his son Eliwood to actively oppose the Rebellion. As Eliwood led a campaign to Valor, Nergal formulated a backup plan and ordered the morph Limstella to contact Sonia and arrange a meeting with King Desmond of Bern. While Eliwood found Elbert and slew Darin at The Dragon's Gate, he was unable to stop Nergal from draining Elbert of his quintessence. During the confusion of a failed dragon summoning, a dying Elbert used the last of his strength to greatly wound Nergal, forcing him to retreat.

While Nergal dealt with Eliwood, Sonia arranged for the assassination of Desmond's son Zephiel, who Desmond heavily resented. Should the Fangs successfully kill his estranged son, Nergal would gain Bern's might, granting him more opportunities to gain quintessence. With Darin's demise, Nergal abandoned the Lycian rebellion in favor of this backup plan. He also commanded Sonia to mobilize the Four Fangs (Lloyd, Linus and the elite assassins Ursula and Jaffar) to assassinate Eliwood. For added insurance, Nergal also ordered Sonia to release Pascal, one of the original Four Fangs before his imprisonment by Brendan for his extreme cruelty. However, Eliwood's successfully fended off the Reed brothers and slew Pascal, and on the night of Zephiel's assassination attempt Sonia assigned either Kenneth or Jerme to stall his army. Sonia tasked Nino and Jaffar with the killing itself, and promised Nino that should she succeed in her task, she would hold her hand for the first time. After Nino's departure, Sonia ordered Jaffar to murder Nino following the mission's completion, as a scapegoat was needed to quell any likely chaos following the assassination. Jaffar was shocked at such a command, but Sonia admitted that a dead Nino would please her far more than her life ever did.

In Zephiel's manse, Jaffar successfully incapacitated Zephiel, leaving Nino to finish him off. However, Nino sympathized with Zephiel and Desmond's strained relationship and could not bring herself to kill him. She offered her life to Jaffar so he could avoid the Fang's judgment, but he defied Sonia's orders and planned to escape the manse with Nino in tow. Sonia anticipated Jaffar's betrayal and sent a squad of Fangs led by Ursula and Maxime to monitor them. With the mission rapidly deteriorating, Ursula ordered all lights in the manse put out, and the three's execution. Having defeated Kenneth or Jerme Eliwood's army arrived during the ensuing chaos and successfully defended Nino, Jaffar and Zephiel in spite of the darkness. Attempting to regroup in Bern's water temple, Sonia promised Limstella that she would kill Eliwood personally for Nergal, only for Brendan to catch the morphs mid-conversation. Having been found out, Sonia admitted her true motives for marrying him, and gloated over Brendan's weakness and lack of foresight compared to his sons. An angry Brendan attacked her, but Sonia emerged victorious in their resulting scuffle and harvesting his quintessence to placate Nergal. Indeed, her master was furious over both the botched assassination and Eliwood's continued survival, but pleased with the fresh quintessence. However, Nergal noticed Brendan wounded Sonia during his fatal confrontation, which proved to be the last straw for him. Coldly stating that he had no use for a defective puppet, Nergal promptly killed Sonia.

Alternatively, during Eliwood's defense of Zephiel, it was possible for him, his best friend Hector, or their fellow companion Lyn to reason with Nino. When they explained that the Black Fang was heavily corrupted by Nergal's influence and it would be in her and Zephiel's best interest if she joined them, Nino immediately defected to Eliwood's side and tried to convince Jaffar to join him. Though he refused, Jaffar helped her fight Ursula and Maxime's forces.

After the battle, Nino snuck away to confront Sonia, Jaffar offering to accompany her. Having eavesdropped on their conversation, Eliwood, Lyn and Hector promptly followed them out of concern for their safety. Sonia had an identical discussion with Limstella and confrontation with her husband, but Limstella took Brendan's quintessence instead, noticed Sonia's wounds, offered to find Eliwood while she recovered and stated Nergal ordered Sonia to fall back. Sonia, however rebuffed these orders, saying she will claim all the glory.

When Nino and Jaffar reached the water temple, Sonia rebuked the former for her failures, revealed the truth of her parentage, and reiterated her utter loathing of her. Before Sonia could execute the two, Eliwood and company made their entrance. Despite flooding the temple, Sonia was mortally wounded in the ensuing battle. As Sonia lay dying and begging for Nergal to save her, Limstella once again appeared before her, repeating the same dismissal Sonia gave her as a cruel form of karma. Sonia's last words were to continue insisting that she was human.

Sonia was first made available to Fire Emblem Heroes summoners on April 7, 2021 as the fifty-forth Grand Hero Battle. Her outfit is based on her design from The Blazing Blade. 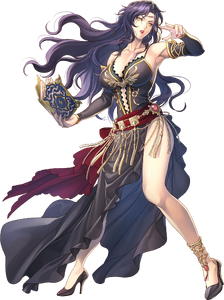 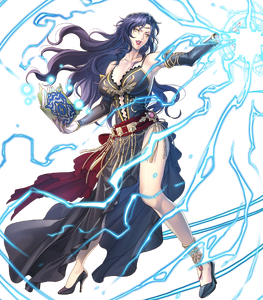 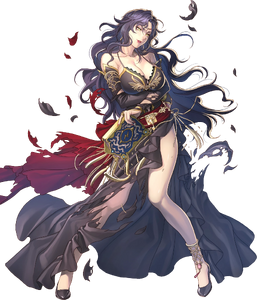 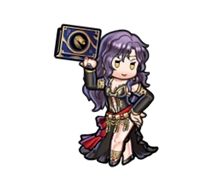 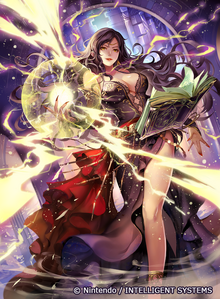 Artwork for a Fire Emblem 0 trading card of Sonia.