Possess a mobile fortress that enables them to strike from anywhere

Launch a nuclear weapon into the America from the skies above Manhattan and devastate the Manhattan city.

On April 29, 2009, the terrorist organization named Sons of Liberty took control of the Big Shell offshore oil cleanup facility off the coast of Manhattan. After assuming command of the facility, they appropriated the secretly-developed Arsenal Gear warship and its artificial intelligence program called GW. Solidus planned to decode GW in order to discover The Patriots' identities and launch a nuclear weapon in the skies above Manhattan, thus causing a gigantic electromagnetic pulse – effectively "unplugging" Manhattan and leading it to become a free republic...

However, the entire plan was being manipulated by The Patriots' intervention through their agent, Revolver Ocelot.

Thirty hostages (including American president named Johnson) were being held captive in the Big Shell. Solidus allegedly demanded a massive ransom, or he would detonate the Shell and therefore horribly contaminate the ecosystem beyond immediate repair. Special forces agent Raiden was sent in to thwart the plot. In reality, Raiden was sent in by The Patriots as the entire event was scripted and manipulated by The Patriots to mold Raiden into the perfect soldier (much like Solid Snake) as part of their plot to control humanity (known as S3 Plan). Also, the Sons of Liberty never demanded the ransom of thirty billion dollars to begin with.

Raiden later rescued GW's programmer in the organization's captive, Emma Emmerich, convincing her that he was not a member of the Sons of Liberty due to his possession of internal nanomachines. However, the terrorists had no further use for her and to prevent her from infecting GW with a worm cluster, Dead Cell member Vamp fatally wounded her.

After Arsenal Gear's destruction, nearly every member of the Sons of Liberty group was killed, except for Vamp, Revolver Ocelot, and Johnny Sasaki. 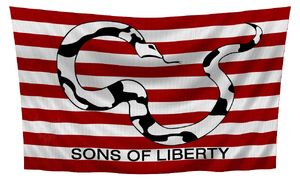