Assist Frieza in destroying his enemies.

Sorbet is the commander of the Frieza Force Third Stellar Region Army and the secondary antagonist of the 2015 film Dragon Ball Z: Resurrection F, and its retelling in Dragon Ball Super.

He is a former Staff Officer in the Third Stellar Region serving as the interim leader of the Galactic Frieza Army after Frieza's demise.

He was voiced by Shirō Saitō in the Japanese version, and by Jeremy Schwartz and Paul St. Peter in the English version.

Sorbet was originally a Staff Officer in the Third Stellar Region Army. After Frieza's death, Sorbet seized control of the Galactic Frieza Army. However, without Frieza, the organization began to collapse, with more and more planets rebelling against their regime. In order keep the Army in order, he resurrects Frieza with the seven Dragon Balls of Earth.

After Frieza's training, they return to Earth with an army to defeat Goku and his friends. But Goku's friends defeat Frieza's army of 1,000 soldiers.

During the final battle between Super Saiyan God Super Saiyan Goku, and Golden Frieza, Sorbet shoots Goku with his laser ring, severely weakening the Saiyan. However, Goku is saved by Vegeta, who asks Krillin to give a Senzu to Goku. Frieza shoots an energy blast aimed at Krillin, but Vegeta deflects the blast over Sorbet's location, killing him.

In the manga of Super, Sorbet is informed by Tagoma that his army's second best is taken out, Sorbet then suggests to Tagoma that they should look for the Dragon Balls in order to revive Frieza.

In space, Sorbet is informed by his subordinate that the elites on Planet Frieza 448 are dying down and cannot hold up any longer. Sorbet gives him the orders to have them retreat back. Immediately after this, the ship gets knocked away by Vados warping. As the ship is being repaired, Sorbet asks for reports of his men from his subordinate. 60% of the soldiers have been exterminated so Sorbet's only option to recover the army is to revive Frieza. Tagoma doubts that one person could change what has happened to the army but Sorbet explains to Tagoma because of Frieza's merciless and ruthless nature, most of the universe feared him. With Frieza, Sorbet claims that 70% of the planets in the universe will be theirs. Sorbet reveals that he took leadership after Frieza has been deceased and will help recover the army once Frieza has been revived. Without luck having to find the remaining Namekians, Sorbet has no choice but to go to Earth with Tagoma to get the Dragon Balls.

He watches the battle between Goku and Frieza, and when Goku powers down, Sorbet blasts Goku in the chest. When Vegeta kicks Goku to the other Z fighters, Frieza attempts a Death Beam on Vegeta, but he deflects it. This Death Beam hits Sorbet in the heart, killing him.

Sorbet has a good sense of military strategy. He is very clever, dexterous, manipulative, and intelligent; he aids in developing the advanced regeneration machine, and is aware that the Z Fighters can sense energy, making him only bring Tagoma with him. He is extremely dependable and loyal to Frieza, and will beg for mercy and stutter if he says anything that would upset him. He is somewhat cowardly and pusillanimous, as he is seen shuddering at Tagoma when he won't back down, and is almost never seen fighting. He is also shown to be dishonorable and iniquitous, when he attacks Goku with his Laser Ring, instead of letting the fight be fair.

He is also shown to have some care for his soldiers. This is seen when he is shocked that the Z fighters are annihilating Frieza's soldiers, and when Shisami is killed by Tagoma, he bursts into rage at the death of one of his most powerful soldiers, instead of seeing that it severely weakened Gohan. He can also tolerate slights to him, as seen when Frieza offers the position of Supreme Commader of the Frieza Force to not only Tagoma, but as well as Vegeta. 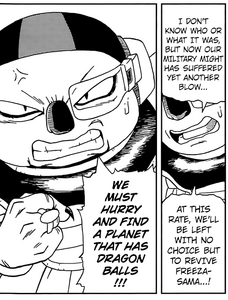 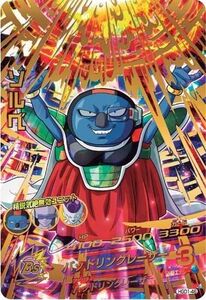 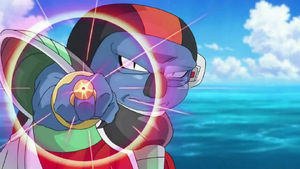 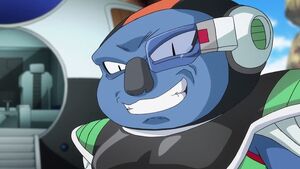 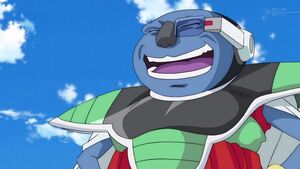 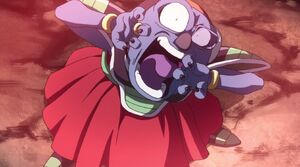