Being with each other.

Sorbet and Gelato are minor characters in JoJo's Bizarre Adventure: Golden Wind. They were assassins working for La Squadra Esecuzioni two years prior the events of the story before they were brutally murdered by the Boss as an example when they breached his privacy.

Two years prior the events of JoJo's Bizarre Adventure: Golden Wind, La Squadra started to rebel against the Boss' orders in order to gain a more active role within the organization. Sorbet and Gelato decided to find out about the Boss' true identity but as a result, both of them ended up captured and missing. Risotto points out that their absence is strange as Sorbet wouldn't miss out a chance to earn money. Their teammates then started looking for them.

Formaggio eventually finds Gelato dead in his apartment, tied up, with tears in his eyes and a cloth gag stuffed down his throat, having suffocated to death. Sorbet is nowhere to be found even though Gelato's kitchen is stained with his blood. Two days later, dozens of packages with no sender arrives at La Squadra's hiding location and has frames in them. Risotto and his men arrange the frames in order and to their shock, they find Sorbet's body sliced up and organized within the frames, preserved in formalin. Much like Gelato, Sorbet's facial expression is twisted in agony and horror and Illuso points out that Sorbet was likely sliced to death from his toes while Gelato was forced to death, forcing to commit suicide to avoid similar fate. 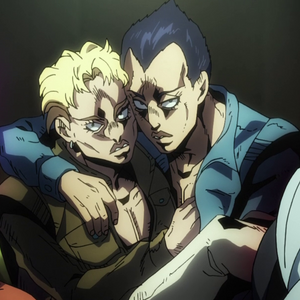 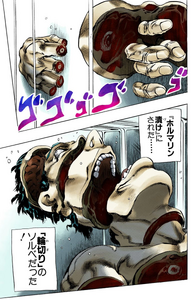 Retrieved from "https://villains.fandom.com/wiki/Sorbet_and_Gelato?oldid=3503434"
Community content is available under CC-BY-SA unless otherwise noted.