Exterminate all life on Earth (all failed).

Sosai (Leader) X is the central overarching antagonist of the Japanese anime series Science Ninja Team Gatchaman. He is the founder of Galactor, a criminal organization which initially seeks to conquer all of Earth for X's race to colonize, but later seeks to destroy Earth altogether after X learns about his planet's destruction years ago. For the first season, Berg Katse was his second-in-command, often carrying out criminal or terrorist plots at the direction of X. This role was soon filled by Gel Sadora in the second season, after Katse was killed off in the first season finale. After being presumably defeated in the second season finale, X returned and reincarnated himself at Sosai Z, who turned out to be even more ruthless than he was as X.

Sosai X is a cruel, manipulative alien who desires to assimilate all reality in his image at whatever cost. He shows a willingness to kill or dispose any henchmen who fail, betray, or no longer are any use to him, a fate that befell Katse, Sadora and Egobossler, all three of whom had, in an ironic twist, also ordered or carried out executions of failed henchmen under their supervision, often under X's command. He also shows no empathy towards any human being on Earth, underscoring the lack of empathy by killing a cruise ship full of innocents and kidnapping a little girl, who would become Gel Sadora, just so that he can find a replacement for Katse.

An arrogant leader, X felt he was invincible, believing that no being on Earth could defeat him. He also believes that he's entitled to loyalty from his minions, no matter what he does to them to give them doubt. A noteworthy example is when he kills the mother of Gel Sadora, and then being flabbergasted over why she defies him.

Not much is known about his physical form. He's only appeared in the series as an artificial intelligence program X has used to communicate his plans to Berg Katse in the latter's headquarters. In the episode "Who is Sosai X?," a roboticist named Dr. Henjinman threatened to reveal X's secret identity unless he displaced Katse as leader. The identity remained secret, however, as Katse helped X mortally wound Henjiman by activating light rays, X's only known ability.

X was an alien from the planet Selectol, serving under the command of unknown superiors seeking to conquer Earth. He first arrived to Earth a thousand years before the events of the series, laying dormant in between that period waiting for the right moment to begin his operation.

At some point, X kidnapped two fraternal twins and manipulated their component parts to form the entity Berg Katse, who was easily manipulated by X to join Galactor as the driving force for X's plans for much of the first season. Upon learning of his homeworld's destruction, which had happened many years prior, X decides to change the plan from colonizing Earth to destroying it and all of its inhabitants out of pure spite. Intending to implant a black hole at the Earth's core, it would suck all life on it into a space of nothingness. When Katse learned about X's plans, they fall into depression and commit suicide by jumping into a pit of magma. Gatchaman thwarted X's plans and destroyed him when Gatchaman team member Joe threw a feather shuriken into a gear initially intended for Katse inside a mechanism X was travelling in, causing it to crash.

Unbeknownst to Gatchaman, X survived and began searching Earth to find a new second-in-command, eventually settling on a little girl in a cruise ship full of passengers. Attacking the ship, X kills nearly everyone on board, sparing the girl and eventually raising her to become Katse's successor, Gel Sadora. After collaborating with X on various plots, Sadora found out the truth about her origins, and rebelled against him when she learned about his cruelty and true plans. X then had Galactor soldiers murder her, when she help Gatchaman assault X's base. X was then presumably destroyed for good when Joe and Ken blow up the base with X still inside.

A tiny piece of X's body remained intact after the explosion, however. Using the remains of an abandoned shipyard, the reborn Sosai "Z" attempted to rebuild Galactor with the help of ruthless dictator Count Egobossler, whilst setting up Operation Poison Apple, where he would use an asteroid made of antimatter to devastate the entire planet and destroy all of its inhabitants. In the series finale, Z, no longer seeing any use for Egobossler, kills him with his own sword and leaves his corpse out for Gatchaman to find. Ultimately, the team uses the Gatchaspartan to destroy Z, presumably sacrificing themselves and ending the threat of Sosai X forever. 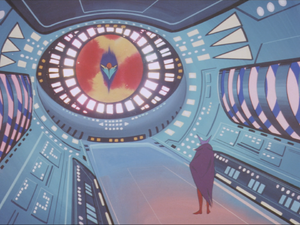 X conferring with Berg Katse in "Gatchaman Versus Turtle King". 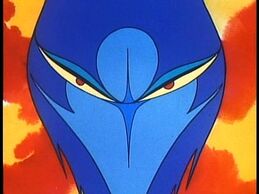 Close-up of X's face.
Add a photo to this gallery

Retrieved from "https://villains.fandom.com/wiki/Sosai_X?oldid=3919582"
Community content is available under CC-BY-SA unless otherwise noted.