Have revenge on the humans by killing Roshan (all failed).

Soto is the main antagonist of Blue Sky's 1st animated feature film Ice Age, despite his role being small. He is the deadly and dangerous leader of his pack that was made up of Zeke, Oscar, Lenny, and Diego. Soto was infatuated with revenge and planned on taking out a group of Neanderthal tribesmen and eating Roshan, their youngest child, in vengeance for the murders of his fellow pack members done by the hands of the humans.

He was voiced by Goran Višnjić, who also played Garcia Flynn in Timeless.

Due to his immense strength, he was the leader of his pack, leading his pack in hunts for food. After several of his fellow pack members were murdered by a Tribe of humans, he was taken over by the temptations of revenge, acting out on a perverted vision of justice, choosing to go after the humans instead of migrating down south like all the other animals.

Soto declared that they would kill off the humans' youngest, a baby named Roshan, as an act of revenge to strike back at the humans. Soto and his most trusted pack member, Diego, plan an attack on the human camp, so that while he and three other sabers would attack the humans, Diego would slip in, stealthily, and take Roshan without being noticed, as a chance to put their plans into motion. Soto then ordered Diego to alert the others for an attack at dawn.

The very next morning, Soto and his pack ambushed the camp, taking attention away from the tent in which Roshan was located in, and as planned, Diego takes advantage of this and slips in, undetected, to take Roshan, until the baby's mother, Nadia, hurried in and snatched him up before Diego could do so. Diego chases after the woman, eventually cornering her at the edge of a cliff overlooking a huge waterfall. The woman grabs her baby and jumps into the raging river several meters below. Thus, the plan failed and the pack is forced to retreat. Soto is furious at Diego's failure, but gives him another chance. He tells the rest of his pack that they'll go to Half Peak and orders Diego to meet them there, with the baby.

On the way to Half Peak, the pack stopped for the night and Soto sent out two from the pack, Oscar and Zeke, to deliver a message to Diego, who was accompanied by Manny and Sid. Soto told his two pack members to deliver a message to Diego, informing him to either come back with Roshan or to not come back at all. Diego, in response, told them to inform Soto that he'd bring back the baby, along with a mammoth.

After getting closer to Half Peak with the mammoth, sloth and baby, Diego once again rejoined with his pack and met with Soto, who was beginning to get anxious about Diego, but expressed his approval at Diego's efforts. Unbeknownst to Soto, however, Diego had joined forces with Manny and Sid, in his own plan to save Roshan and escape unharmed.

The pack had laid in hiding at Soto's orders, who were ordered not to move until they saw the mammoth. Diego, who was trying to sabotage the attack, convinced Zeke to jump out of hiding too early, which caught Sid's attention. Sid, however, knew it would happen and sped away with a bundle in his paws on a pair of skis fashioned from two large pieces of bark, to be chased by Soto and the others until Sid lost his footing and dropped the bundle of clothing, which Soto pawed at, only to find it was a decoy made of snow. Soto angrily ordered his pack to get Sid. Soto then found Diego and Manny and invited Diego to help bring the mammoth down, only to find out about Diego's betrayal. Enraged, Soto fought with Diego while Lenny and Oscar cornered Manny. The fight between the two was evenly matched until Soto threw Diego into a rock, knocking him out unconscious. With Diego out of the way, Soto turned his attention over to Manny.

Soto was about to leap in for the kill on Manny, until Diego stood in the way and refused to let Soto harm the mammoth. Without any second thought or regrets, Soto struck down Diego, severely wounding him. Before he could kill Diego, Soto then heard Roshan's cries and saw Sid with Roshan and walked towards them to have his revenge. Manny struck the distracted Soto aside with his tusks, flinging him into a stone wall, the impact causing several sharp icicles from the top of the wall to fall on Soto, impaling and instantly killing him. The rest of the pack, now leaderless, flee and don't come back.

Soto is a manipulative, unsympathetic, bloodthirsty, remorseless and aggressive predator who feels no regret or guilt for killing both prey, or human, most likely turned cold due to his members of his pack being murdered by the hands of the humans, which started his extreme hatred for them, driven by poetic justice for his fallen comrades. Dedicated to stalking out his victims and striking against them in revenge for those who had wronged him. Soto seems to show no care or thought for anyone but himself and his fellow pack members, but was not afraid to calling out their mistakes and even using deadly force against those who had defied him. 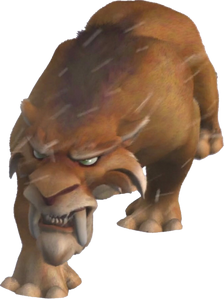 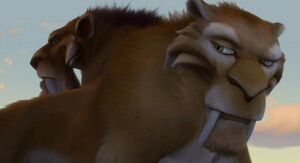 Soto orders Diego to fetch him the baby when the pack attacks the tribe.

Soto in a deleted scene. 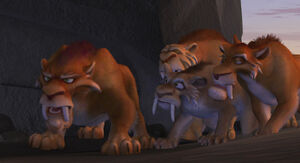 Soto angry to hear that Diego lost the baby over the falls. 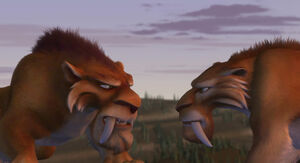 "I want that baby, Diego! (Diego: I'll get it!) You'd better... unless you wanna serve yourself as a replacement!" 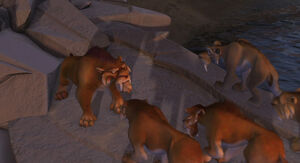 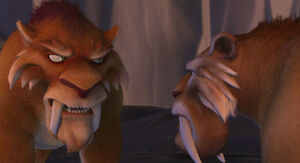 "Meet us there! It'd better be alive!" 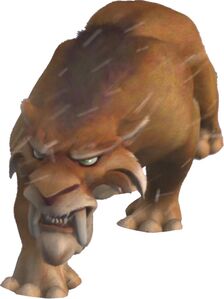 Soto losing his patience while waiting for Diego's arrival. 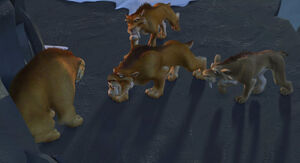 "Mammoths don't go down easy! There's only one way to do it. First you have to force it into a corner, cut off its retreat and when you three have it trapped..." 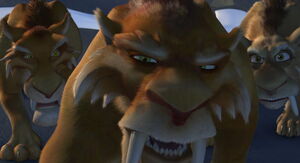 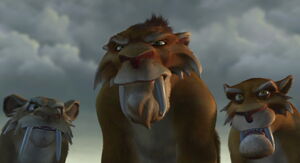 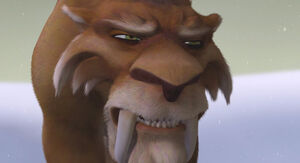 "Come on, Diego. Let's bring this mammoth down!" 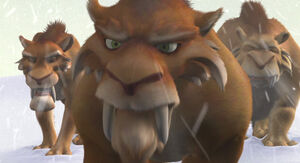 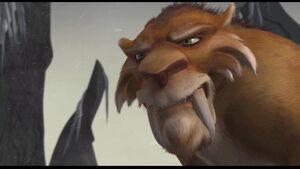 Soto grinning evilly as he makes his way toward Roshan. 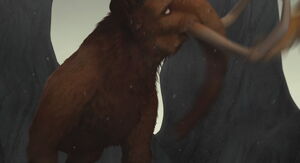 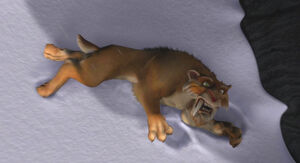 Soto's final moments as he sees the icicles fall toward him and impale him to death.
Add a photo to this gallery

Retrieved from "https://villains.fandom.com/wiki/Soto_(Ice_Age)?oldid=2664699"
Community content is available under CC-BY-SA unless otherwise noted.