Sou Yaguruma is an official of ZECT and a recurring anti-hero in Kamen Rider Kabuto, often serving as an antagonistic rival of Souji Tendou. He commands an elite unit of ZECTroopers with yellow stripes on their uniforms called Shadow. Despite starting off fully committed to ZECT's goals of exterminating the Worms, Yaguruma later strays from this in order to fulfill his own personal goal of besting Tendou.

Yaguruma was the original user of the TheBee Zecter to become Kamen Rider TheBee. After losing the Zecter, Yaguruma becomes Kamen Rider KickHopper.

He was portrayed by Hidenori Tokuyama.

Sou Yaguruma initially attempted to get Souji Tendou to join ZECT but Tendou refused, sparking an enmity between the two. This led to a showdown between the two Riders where Tendou defeated Yaguruma. Bitter over his defeat, Yaguruma attempted to get back at Kabuto, endangering his team in the process. Because of Yaguruma's single-minded focus on revenge, the TheBee Zecter eventually rejected him. The TheBee Zecter later chose Kageyama as its new user, making him the leader of Shadow. Yaguruma asked Kageyama to let him rejoin Shadow, but Kageyama refused.

Yaguruma later returns as Kamen Rider KickHopper and defeats Kageyama as TheBee. He convinces Kageyama to join with him after he loses the TheBee Zecter, giving his partner the PunchHopper Zecter. KickHopper and PunchHopper later attack Kabuto and Gatack within an abandoned factory, and swiftly defeated them after they were weakened by the "Red Shoes" system.

After Rena Mamiya's human memories surfaced, Yaguruma and Kageyama attempted to kill her while she was disconcerted. Kamen Rider Drake attempted to stop them after developing a crush on rena but the two Hoppers were able to fight him off. However, when got the chance to finish off Rena, Yaguruma hesitated after seeing in her eyes and seemingly developing empathy with her. Gon then uses a fire extinguisher to distract the Hoppers, giving Drake and Rena a chance to get away. Their attempt almost works, but Rena is saved by Kamen Rider Drake. Kageyama later asked Yaguruma why he had not killed Rena when he had the chance, to which Yaguruma stated that he had taken a liking to Rena.

Yaguruma would later defend Rena when she fell under attack by the Subst Worm. His affection for Rena severely strained his bond with Kageyama, who felt it went against their beliefs of abandoning the light. However, Yaguruma and Kageyama's attack caused Rena's personality as the Uca Worm to eventually surface again. After being sent flying by Uca Worm, Yaguruma returns to Kageyama and they become partners again.

Yaguruma and Kageyama later fought and defeated Tsurugi Kamishiro as Punch and Kick Hopper. After the fight, Yaguruma offered Kamishiro a place as his little brother, which Tsurugi happily accepts. Yaguruma later attempts to face off against Tendou in a tofu cook-off, but since the seller is sold out, they would have to reschedule. The trio then encounters Reiji Nogi who makes short work of them using "Freeze" to move out of the way and cause all their Rider Finishers to collide. Continuing from the comical arc of the tofu cook-off, near the end of the episode, Tendou accidentally stood them up, and Yaguruma and Kageyama are left in the street wondering if Tendou will come and if the challenge will still commence.

Yaguruma was also at one point offered the TheBee Zecter again by Tadokoro, but refuses it because he enjoys staying in the pitch black hell, kicking it away.

When Reiji Nogi/Cassis Worm led a Worm incursion into Area Z, Yaguruma went to assist the Riders in fighting Cassis Worm Gradius after it defeated Kageyama. KickHopper performs a Triple Rider Kick together with Kabuto and Gatack, neutralizing its "Absorb" ability before it is defeated by Hyper Kabuto.

Kamen Riders KickHopper and PunchHopper later fight one of the two Cassis Worm Clipeus, knocking it into the air before destroying it with a Rider Kick and Punch as it falls to the earth. After seeing a picture of the Northern Lights, Yaguruma begins to ponder returning to the light again. When he notices that Kageyama has a Worm identification pendant, Yaguruma scolds him for using it. However, the pendant eventually causes Kageyama to lose control and forcibly converts him into a Native Worm. To put his partner out his misery, Yaguruma uses a Rider Kick to fatally wound him. As Kageyama passes on, Yaguruma holds his comrade and tells him that they will always be partners and that they have to return to the light once again. Yaguruma's fate afterwards is not shown and left ambiguous.

In the alternate timeline, Yaguruma kept the TheBee Zecter and serving as a ZECT official alongside Tetsuki Yamato. During a fight against Neo-Zect at the site of Jacob's Ladder, he was killed by Kamen Rider Hercus, commenting that he had received a "perfect death" as he died.

Yaguruma appears in the World of Kuuga along with PunchHopper during a dimensional distortion caused by Narutaki to fight Decade. As they turn their attention to Kuuga, Narutaki causes another distortion that sends the two to a dimension where Kamen Riders Delta and Tiger reside.

KickHopper later appears in the World of Decade as one of the "Wildcard Riders" alongside Kamen Rider Ouja, siding with Dai-Shocker due to wanting to experience their hell. Diend summons PunchHopper, Gai, and Raia to fight him and. He fights PunchHopper and appears to have the upper hand. The results are not shown.

Kamen Rider KickHopper was part of a group of reinforcement riders led by Akira Date/Kamen Rider Birth that arrived to assist the primary riders in their fight against the Rock Great Leader. KickHopper took part in the All Rider Break attack performed by all the Kamen Riders on their bikes which destroyed the Great Leader.

Sou Yaguruma obtained the Kabuto Anotherwatch apparently from Uhr and used it to become Another Kabuto, teaming up with a Worm copying the appearance of his old partner Shun Kageyama.

A strong believer in teamwork and "Perfect Harmony", Sou Yaguruma cares greatly for the lives of those under his command. He is a perfectionist and strictly enforces his beliefs on his men. However, he's also impulsive and can be quick to disregard his values when he is angered.

Following his humiliation from being cast out of Shadow and return as Kamen Rider KickHopper, Sou Yaguruma becomes obsessed with experiencing hell and embracing true darkness; in the process of becoming an antisocial nihilist, seeing himself as a loser. Despite this he still deeply cares for Kageyama and guides him to do the same, scolding him whenever he reaches out for the light.

Sou as KickHopper appeared as the boss and unlockable after the game cleared.

As TheBee he focused on boxing with both punching and kicking in terms of Kickboxing. But as KickHopper, he focuses mainly on his legs and kicks, in terms of Tae Kwon Do.

On his first appearance, he assumed the form of Kamen Rider TheBee. Then, he transform into Kamen Rider KickHopper.

Kamen Rider TheBee's strong, heavily armored, but less offensive form resembling a beehive. This is the default form until the rider rotates TheBee Zecter around the wrist to initiate the Cast Off! command.

TheBee's sleeker, faster, and more offensive form which morely resembles the wasp motif. In this form TheBee can initiate the Clock Up command to travel at near light speeds to match the speed of Worms. By pressing a button on TheBee Zecter, the Rider Sting tachyon-powered punch is activated, allowing the user to pierce through a Worm with the stinger on the TheBee Zecter.

Unlike all of the other Riders in Kamen Rider Kabuto, the Kamen Rider Hopper Series Riders only have one form that they transform into. Kamen Rider KickHopper has a green Acrida cinerea motif and by raising the legs on the Hopper Zecter, KickHopper can jump high into the sky. By lowering the legs on the Hopper Zecter, the energy is concentrated into a tachyon-powered Rider Kick. The impact upon landing on the ground again powers up another kick. 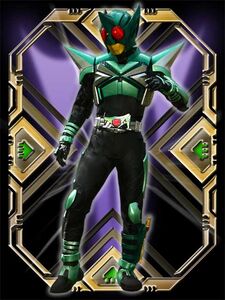 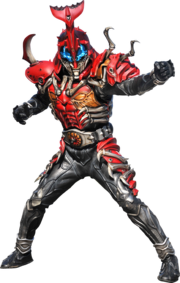