The Soul Strangler is a minor antagonist in Marvel Comics. He is mysterious but frightening villain that acted as one of the main antagonists of "Black Panther Vs The Klan", a special ten-part comic book story revolving around the black superhero and his confrontation with the real-life Ku Klux Klan.

Soul Strangler came as the more supernatural side of the story (perhaps to add more threat to the Black Panther, who could easily outmatch the non-powered Klan), yet his origins were never fully explored. He claimed to be the embodiment of the Klan's collective hatred made flesh but he could of easily have been the ghost of a former Klansman (or former victim) or a demon such as Mephisto playing on the KKK motive for their own wickedness, another plausible explanation could be that the Soul Strangler was an avatar of Master Hate himself.

Regardless of the demon's origin, the Soul Strangler fought against the Black Panther numerous times throughout the story arc until he was finally overpowered and beaten up. As Black Panther beat the evil spirit it faded away, though it is unlikely a supernatural being such as the Soul Strangler could permanently die (though due to his appearance being limited to this series it is unlikely he will return) 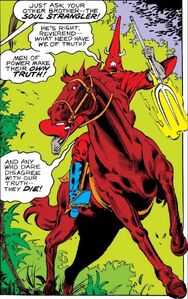 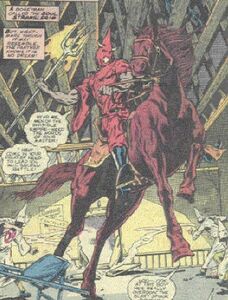 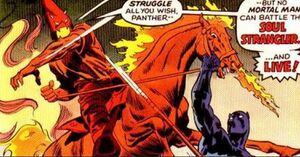