NOTE: This article is about the incarnation of Soudwave from the Transformers live-action film series. The mainstream version can be found here: Soundwave.

Listening to the satellite's communications.

Reporting to the Decepticons.
Posing as Carly Spencer's Mercedez-Benz SLS-AMG.

Soundwave is a recurring antagonist of the Transformers Cinematic Universe, serving as a major antagonist in Transformers: Revenge of the Fallen, Transformers: Dark of the Moon and Bumblebee. He is one of Megatron's loyal Decepticons and his communications officer.

He was voiced by Frank Welker in Revenge of the Fallen (who also played Megatron) and Dark of the Moon, and Jon Bailey in Bumblebee.

Soundwave was awakened after he receive a transmission from Wheelie, who was tailing Mikaela Banes and instructed him to obtain the surviving shard of the Allspark in her hands. While floating across space, he found a government satellite transmitting a conversation between NEST and the US military and began to hack it by releasing his tentacles all over it. He manages to acquire information from it such as the location of the other Allspark fragment in Diego Garcia and Megatron's corpse under the Laurentian Abyss. Waiting till nightfall, Soundwave formulated a plan by ejecting Ravage to attack the area. After the successful retrieval, he sends Ravage again to a cargo ship carrying construction vehicles passing by the Laurentian Abyss, which also had become successful.

He remained in space, while hacking the satellite he is attached. After Megatron finally killed Optimus Prime and have decided to reveal the Decepticon presence on Earth, Soundwave issued the mobilization order to the Decepticons waiting at the Nemesis and then hacked the satellite to show the image of The Fallen giving a speech. He manages to track down Sam's parents in Paris and gave them a call, asking for Sam's whereabouts. Judy can't understand the Decepticon's language and dismissed the call, thinking it was a prank call from a pervert, thus making the Decepticons using them as hostages.

When the CIA manages to locate Sam's whereabouts in Egypt via security camera, Soundwave took the information and immediately gave it to the Decepticons, leaving Starscream in pursuit. Soundwave then blocked the satellites covering the Egyptian area, making things appear normal. He isn't seen again through the rest of the film.

After the events of the previous film, Soundwave left the satellite he is attached and landed on Earth, joining Megatron, Starscream and Igor in their exile on Africa. Soundwave obtained a minion named Laserbeak, a foul-mouthed Decepticon assassin that resembles a condor who can transform into numerous objects. After Laserbeak manages to inform Megatron that the Autobots have discovered the fuel cell of the Ark on Chernobyl and recovering a comatose Sentinel Prime, Megatron decided it was time to eliminate all of the humans who knew about the discoveries of the Ark to avoid their plans from failing again.

Soundwave then orders Laserbeak to kill them all, who does it in pleasure. He is working with Dylan Gould, a human who is allied with the Decepticons. Dylan then gave him as a "gift" to Carly Spencer, Sam's new girlfriend by posing as a Mercedes-Benz SLS AMG. After Sam and Carly tried to leave Dylan's party, Soundwave reveals himself by transforming into his robot mode, throwing Sam away and keeping Carly as a hostage. While Dylan then explained his relationship with the two Decepticons, Soundwave then took the pleasure to threaten Carly using his spiked tentacles but Dylan orders him to stop tormenting her after Sam surrenders.

Soundwave was among the few Decepticons who took pleasure in invading Chicago and killing many humans in the way off-screen. After managing to receive a word from Dylan that the Autobots actually survived, he was one of the few Decepticons who manages to find them and manages to corner the Autobots Bumblebee, Sideswipe, Ratchet, Dino/Mirage and Que/Wheeljack, with Barricade, Shockwave and many others. When Dylan then manages to think of an idea of killing the Autobot hostages as a lesson of respect, Soundwave took this as a pleasure to which he concurred : "No prisoners, only trophies". He and Barricade took the pleasure in killing Que by shooting him, who pleaded badly for his life and afterwards was about to execute Bumblebee, only to be distracted by Wheelie and Brains' hijacking and crashing of a Decepticon ship. Bumblebee and the other Autobots then took this as an opportunity to escape and afterwards punched Soundwave, causing him to drop his weapons then shooting him in the leg, dropping his remaining gun. Bumblebee then finishes him off by throwing an uppercut on his chest and shooting him in the head, killing him.

Soundwave was mentioned by Vivian while she was being kidnapped by Hot Rod. 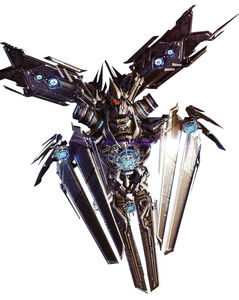 Soundwave as a Cybertronian satellite. 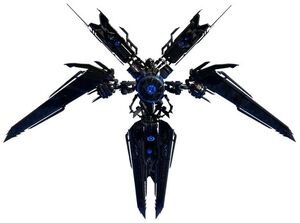 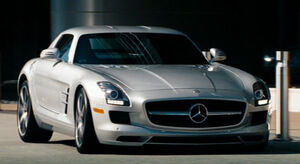 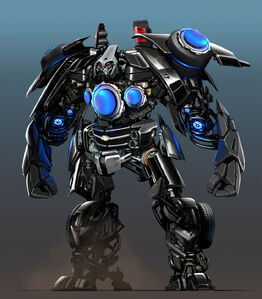 Early design in Revenge of the Fallen. 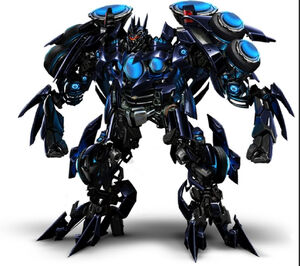 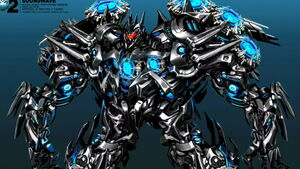 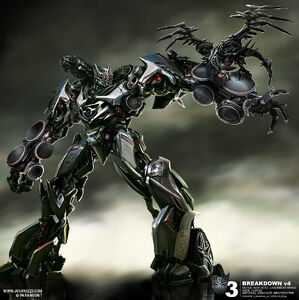 Dark of the Moon concept art. 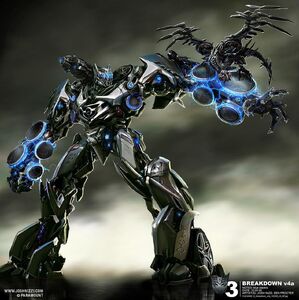 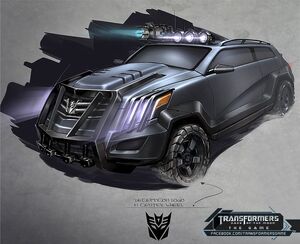 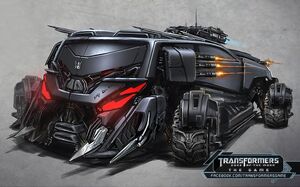 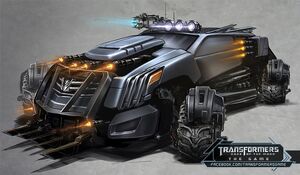 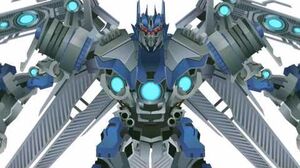 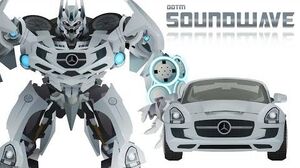