She was voiced by the late June Foray in the 1970 television special, Carol Burnett (who also played Miss Hannigan in Annie) in the 2008 film, and Stephanie D'Abruzzo in The Wubbulous World of Dr. Seuss.

Jane is a busybody and creator of the jungle's laws, who does not believe Horton the Elephant about the Whos and Whoville on the dust speck (mainly due to being under the misapprehension that anything which cannot be seen, heard or felt is nonexistent). She hires a vulture named Vlad to steal the clover bearing the speck for her. When he fails to do so, she orders her henchmen, a group of monkeys known as The Wickersham Brothers, to take the speck from Horton and intimidate him into saying that the Whos do not exist. 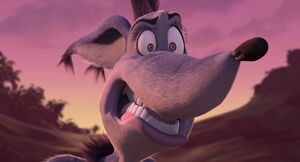 Sour Kangaroo’s Villainous Breakdown.
Add a photo to this gallery

Retrieved from "https://villains.fandom.com/wiki/Sour_Kangaroo?oldid=3922963"
Community content is available under CC-BY-SA unless otherwise noted.