The Source of All Evil

Supreme overlord of the Underworld

Sending supernatural beings to the Underworld.

To maintain his rule of the Underworld.

To destroy the Charmed Ones by any means necessary even at the cost of the Universe itself.

The most prominent Source of All Evil was the demon known as the half-faced Source, who had been in power for centuries. His face was mutilated from his battles during his rise to power and only a few demons had ever seen his face. This Source was the ruler of the Underworld for centuries and defeated all opposition until he was vanquished by the Charmed Ones.

The First Source, also known as the half-faced Source, was responsible for incarcerating the powerful demon Zankou and The Tall Man. He is also responsible for banishing numerous beings from the underworld, such as the vampires, wizards, Kurzon, and possibly even Hecate. Among the Source's many demonic powers are throwing fireballs, teleportation (flaming), manipulating flame, shape-shifting, summoning demons and evil beings, mind control and possession.

He was portrayed by Michael Bailey Smith, Ben Guillory, and Peter Woodward over the course of the series, and had a brief resurrection in one episode of the show's 8th season.

As Piper Halliwell is about to relinquish her powers in a battle against an alternate version of herself known as Fury, Cole bombards the Source with energy balls as he stands immobile controlling Piper's mind. Cole is eventually able to wound The Source, but as he attempts to kill the Source, his attack is blocked by the Source's Oracle, who dies so the Source can escape.

This battle leaves room for a new oracle known as The Seer to become an adviser to The Source. Later, the Seer betrays the Source by contacting Cole and giving him the Hollow to help defeat the Source. The Seer and Phoebe then use their combined abilities to put the Hollow back in its crypt. However, neither Cole nor the Charmed Ones know that the Seer intends for Cole to become the next Source. When the Source died, the Seer told the sisters that his powers went "into the void." She was referring to the void inside of Cole where Belthazor had once been. She believed that the Source's essence would enter that void and completely take Cole over.

Cole soon starts having nightmares of becoming the new Source, and begins flaming under the Source's influence. He tries to fight the evil growing in him, to no avail. Within a week of the Source's vanquish, it has almost completely taken over Cole.

To complete his plan to turn Phoebe evil and destroy the Power of Three, Cole orders the Seer to give Phoebe a prenatal tonic that will not only strengthen the baby, but destroy Phoebe's good side. However, even under the twin influences of the baby and the tonic, Phoebe still can't bring herself to choose between Cole and her sisters.

After being vanquished, Cole and the Source finally end up as separate beings in the Demonic Wasteland, where demons usually go after being vanquished. As Cole was born half-human (and was in fact fully mortal at the time of his first vanquish), he has a soul while full-blooded demons have no souls. His soul is stuck in the wasteland and has to face a giant monster feeding on the powers of the vanquished demons.

The Seer was an upper-level demon with the power to see the future, as well as the surrogate mother of the Source's Heir.

The Seer secretly intended for Cole to become the next Source. She knew that there was a void in Cole's soul where Belthazor had once been, and believed that the Source would enter that void and completely take him over. After Cole realizes that he has taken on the Source's powers, the Seer acts as his principal advisor. She initially opposed Cole's determination to make Phoebe his queen, though she helped him trick Phoebe into marrying him in a dark wedding so that his son would be born evil. While Cole believed he could use Phoebe's love for him to turn her evil (or at least separate her from her sisters), the Seer thought Phoebe's love could sway Cole away from evil.

Unknown to Cole, the Seer had engineered two attempts to kill Phoebe in hopes that he would make her his queen instead. Soon after his coronation, Cole ordered the Seer to give Phoebe a tonic that would not only strengthen her baby son, but destroy Phoebe's good side as well. When Phoebe found out about this, as well as the fact that Cole killed an innocent her sisters were protecting, she renounced her crown and joined her sisters in vanquishing Cole.

After Cole was vanquished, the Seer stole Phoebe's unborn child - the heir of the Source of All Evil, and transferred it into her body by use of a spell. She told Phoebe that the child was never hers nor Cole's, but that it was hers since the moment of conception. The Seer then called the Council and became the new Source.

She was vanquished soon after when she attempted to kill the Charmed Ones, as she could not handle all of the baby's power. As the Seer threw fire at them, the sisters chanted the Power of Three spell, which created a protective shield around the cage. When the child's power overwhelmed the Seer, she vanquished herself and all demons present.

The original half-faced Source was briefly resurrected by a Possessor Demon. However, as the Source was bound to the Possessor Demon through the magic used to resurrect him, he was re-killed when Piper vanquished the demon with Molecular Combustion.

As the ruler of the Underworld and all that's evil, The Source is one of the most powerful magical beings in the series, and one of the Charmed Ones' greatest enemies. He has displayed a multitude of powers, more than any other demon in the series. Notable instances of his great powers are when he delayed Cole's death so that Phoebe could see him die, and by blocking Phoebe's premonitions about Cole for months. He is extremely difficult to truly vanquish due his existence as an essence of evil, even surviving being destroyed by the Power of Three on more than one occasion. After being reborn as a Golem, the Source's already immense powers grow even further due to his powerful new body, and he could only truly be vanquished when the sisters attacked him with the Excalibur, a potion brewed with the power of the entire good Magical Community and a more powerful version of the Power of Three spell.

Aside from his powers, the Source is an intelligent and cunning demon, having ruled the Underworld for centuries and dealing with all kinds of threats and concealing his true nature to other demons. He also has an understanding of the human nature and has exploited the sisters' bonds, their desires on a peaceful life and their calling to protect the innocents to his advantage on more than one occasion. 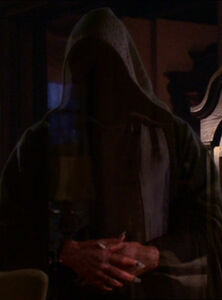 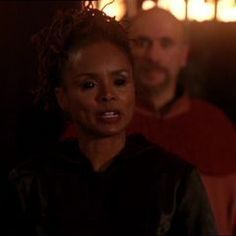 The Seer after assuming The Source's powers. 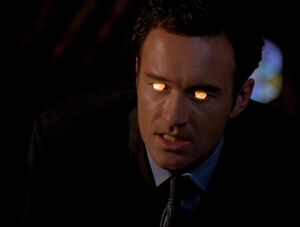 Cole Turner after being possessed by The Source.
Add a photo to this gallery

Retrieved from "https://villains.fandom.com/wiki/Source_of_All_Evil?oldid=4144643"
Community content is available under CC-BY-SA unless otherwise noted.