Villains Wiki
Register
Don't have an account?
Sign In
Advertisement
in: Articles under construction, Mature, Thugs,
and 38 more

The Southside Serpents are a villainous group in ​Riverdale​. They are a criminal gang led by FP Jones and appear frequently throughout the series. As their name implies they reside and commit the vast majority of their crimes in the southside of Riverdale leading to many fearing to go to that area.

They were hired by the unseen antagonist Hiram Lodge (the father of Veronica Lodge and the husband of Hermione Lodge) to decrease the property profitable value of the local Drive-In cinema where FP's son Jughead happened to be both working and living. Upon succeeding in doing this the cinema was now soon to be closed much to the dismay of Jughead who both worked and lived there and had fond memories of the drive-in. On the closing night of the cinema, most of the gang attended as well as a lot of Jughead's friends. The gang members were disturbing the movie for everyone leading to Kevin getting annoyed and doing a failed attempt to stop them. Veronica manages to stop them after this with a rather wordy threat. On this same night, one member encountered Kevin and the two began making out. Upon him informing Kevin that he was a Serpent Kevin promised he wouldn't tell his father or any of the other authorities if he told nobody about their encounter that night. The next morning after the cinema was closed and Jughead packed his things and left he and his dad began a conversation ending with him asking Jughead where he would live with the latter responding by telling him he didn't know. A few nights later Hermione was at work late and found a box and upon opening it jumped in fear after seeing the snake inside of the box the serpents left as a warning. After FP's arrest, the Serpents come to his trailer to see Jughead. They begin by discussing FP's loyalty and courage to the Serpents and they then offer Jughead to join them and they give him one of the leather jackets with the logo on the back which all of the members wear. Jughead accepts their offer much to the disapproval of Betty.

Jughead is seen throughout season 2 discussing with a member of the gang known as Tall Boy about FP's situation and also requests the serpents assistance in discovering the identity of the Angel of Death this, however, ends poorly as the gang takes a man who fitted the description and bet him to a pulp, they later waited for Jughead's return to FP's trailer to ask him if the man was the angel of death much to Jughead's horror.

Jughead discusses the idea of breaking FP out of jail before his transfer to another prison with Tall Boy who disagrees with this saying that it would be a more suitable idea to get FP a better lawyer since a break out is too predictable. 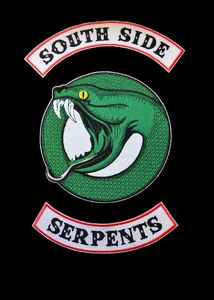