Indoctrinate Saren Arterius and Matriarch Benezia to use them as his tools.
Use the Geth to kill his enemies (both succeeded)
Allow the other Reapers to enter the galaxy
Kill Commander Shepard and their allies (both failed)

It is voiced by Peter Jessop, who also voiced Tharok in Justice League vs. the Fatal Five.

Sovereign is a member of an ancient race of sentient starships called the Reapers, who assimilate all advanced organic life in the galaxy every 50,000 years. Worshipped as a god by the Geth Heretics (which it finds insulting, yet allows to continue to use the Geth as tools) It indoctrinates Saren Arterius and Matriarch Benezia, using them to find "The Conduit", a proto Mass Relay developed by the Protheans which directly accesses the Citadel. The Citadel is in fact an enormous Mass Relay which the Reapers use to enter the Galaxy from dark space, which the Protheans sabotaged in an attemot to prevent the Reaper's return. Sovereigns plan is to have Saren use the Conduit to infiltrate the Citadel and activate the Mass Relay, allowing the Reapers to enter the galaxy and begin their mass harvesting of organic life.

Being approximately two kilometres in size, Sovereign is not directly fought as a boss in the game, but is fought indirectly at the end, where it assumes direct control over Saren's corpse during the final battle, right after which it is destroyed by the SSV Normandy and the Alliance fleet while trying to finish activating the Citadel relay. 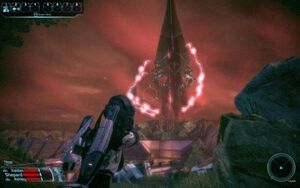 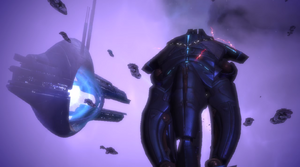 Sovereign exiting a Mass Relay alongside a Geth fleet 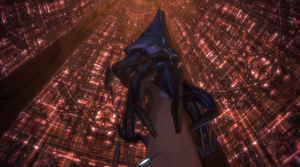 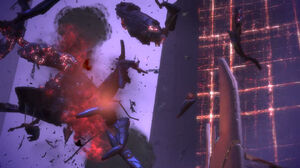 Sovereign's demise
Add a photo to this gallery
Retrieved from "https://villains.fandom.com/wiki/Sovereign_(Mass_Effect)?oldid=4115927"
Community content is available under CC-BY-SA unless otherwise noted.