Firelord of the Fire Nation

Expanding Fire Nation territory and influence around the world.

"Share" the prosperity of the Fire Nation by invading and conquering the other nations (succeeded).

Destroy the Avatar Cycle by wiping out the Air Nomads (partially succeeded).

As a young prince, Sozin was best friends with Avatar Roku. After Sozin took up the throne and Roku became a fully realized Avatar, their friendship became strained to the breaking point as Sozin desired the Fire Nation to encompass the world, a plan to which Roku was strongly opposed. Following a hostile confrontation over this which ended in Sozin's defeat, neither spoke to the other until they were both very old. Sozin betrayed his old friend to his death and began waging war. Fire Lord Sozin was the instigator of the War and the Fire Lord before his son, Azulon. He was grandfather to Iroh and Ozai and great-grandfather to Zuko, Azula, and Lu Ten.

Using the fire-enhancing power of a comet, Sozin eradicated the Air Nomads to try to eliminate the next Avatar, but failed. He spent the last years of his life hunting the new Avatar in vain.

He was voiced by Ron Perlman, who also played Xibalba in The Book of Life, the High Mage in the 2003 Teenage Mutant Ninja Turtles cartoon series, Justice in Afro Samurai and Warhok in Kim Possible.

Roku and Sozin at their birthday celebration. In his youth, Prince Sozin and Avatar Roku were best friends and even shared the same birthday, which they celebrated together. It could be said that both of them were also firebending masters at an early age, given that Roku was the Avatar, which was then unknown, and Sozin's family had a natural affinity for their element.

At their sixteenth birthday celebration, Roku was told by the Fire Sages that he was the Avatar, and the two friends were forced to separate as Roku goes to learn mastery of the three other elements. Before leaving, Sozin came by to talk and was told by Roku that the sages told him to bring nothing, as the Avatar needed no material goods.

By this statement, Sozin gave him a gift: the headpiece worn by the Crown Prince of the Fire Nation, hoping that he was at least allowed to have that.

12 years later, Roku returned to the Fire Nation and Sozin had become Fire Lord. At Roku's wedding, Sozin took the position of his best man. At the wedding, Sozin commented that the Fire Nation was going through a period of great prosperity and told Roku that together, the two of them could spread it to the world by expanding the empire.

Roku is greatly disturbed by this, telling Sozin that the four nations are meant to be kept separate and that he should not think of this again. Several years later, however, Roku discovered that Sozin had set up colonies in the Earth Kingdom and came to rebuke him, leading Sozin to attack him. The two engage in a battle, with Roku finally destroying most of the palace and defeating Sozin. Roku spared his life because of their past friendship but warned him never to move forward with his plans again, or it would result in his "permanent end."

25 years later, Roku's home island was consumed in a volcanic eruption so massive that Sozin could see and feel it from 100 miles away. The Fire Lord flew in on his dragon to assist his old friend. The two used their bending to try to contain the lava flow but were hindered by poisonous gases, which eventually overwhelmed Roku, leaving him lying on the ground and begging for his old friend's help. However, Sozin suddenly realized that Roku's death would allow him to fulfill his plans, and left his old friend to die along with his dragon Fang.

Twelve years after Roku had died, Sozin used the power of a comet to enhance the power of his firebender army and launched a genocidal attack on the Air Nomads in an attempt to kill Aang, the new Avatar, and halt the Avatar cycle. However, Sozin failed, as Aang had ran away from the Air Nomads some time before. Sozin spent the rest of his life searching, so that he could find and destroy the last airbender.

After the comet, he lived 20 more years and had a son, Prince Azulon. It is unknown what kind of relationship Sozin had with his son, but Azulon would come to share his thirst for world domination, including Ozai, Azula and their followers, and became a terrifying dictator. It is unknown who Sozin's wife was.

One of his lesser-known military accomplishments during this period was the Battle of Han Tui, which was applauded as a magnificent display of skill and military cunning.

At some point during his reign, probably after Roku's death, Sozin started the tradition of hunting dragons for glory. For a firebender to be able to kill a dragon, the original firebenders, he would be showered with glory and praise, and earn the honorary title "Dragon". This led to the dragons' near-extinction.

However, it appeared that at the end of his life he regrets what he started by stating "As I feel my own life dimming, I can't help but think of a time when everything was so much brighter....". Though betraying Roku is probably what he was referring to.

He eventually died at age of 102. Rumors from citizens suspect he lived to be older due to the influence of the power of the comet. According to what was learned in Fire Nation schools, Sozin died peacefully in his sleep, a very old and successful man, though he failed with his quest to find the last airbender and stop the potential threat of the Fire nation: The return of the Avatar.

When Zaheer met with Korra in the spirit world, he mentioned Sozin as an example of abusive tyrants who damaged the world for their selfish ambitions when defending his desire to eliminate all world leaders, as Sozin's desire for expansion caused the near extinction of an entire culture.

Sozin was ruthless, merciless, and inconsiderate as Fire Lord, as demonstrated by his ordering the genocide of the Air Nomads simply to locate and destroy a single obstacle to his power, and his decision to start the tradition of hunting dragons, despite having one as a companion. His betrayal of his closest friend, Avatar Roku, also highlights his willingness to embrace power over friendship and kindness. However, unlike his more warmongering and militaristic son, Azulon, and his grandson, Ozai, Sozin (at least initially) saw his war with the other nations as a case of "ends justifying means" - he hoped not simply to increase his own power, but to provide the other nations' with the Fire Nation's higher standard of living and perceived better system of order. Domestically, Sozin preferred to silence, but not to completely destroy, opposition to his policies. This is exemplified in the fact that he did not execute Fire Sage Kaja, a known friend of Roku, when the latter declared that the new Avatar had not died during the Air Nomad Genocide. Additionally, when Sozin wanted to eliminate the Fire Nation's ancient history to legitimize his policies, he chose not to destroy the historical corridors of the Dragonbone Catacombs but to simply seal them, believing that he could still learn from the past.

Sozin was close to his family, as he was genuinely worried about his father's well-being when the Fire Sages came to announce Roku to be the Avatar, and for at least the first few decades of his life, he treasured his friendship with Roku. Despite their unpleasant split decades earlier, he went to help his former friend when he saw Roku's volcanic island erupt; though despite Roku saving him at one point, Sozin ultimately left him to die, realizing that without the Avatar, he was free to carry out his plans for the Fire Nation and the world.

It was indicated that at the end of his life, Sozin came to regret his actions, apparently as he finally realized that while his intentions were noble, the war he started and the many atrocities he committed was only leading to more pain through the world, but unfortunately, he was too weak and too old at that time to try to achieve any measure of redemption.

Sozin removes the magma's heat. Being Fire Lord, Sozin was a powerful firebending master. When he was young, he sparred with Avatar Roku and defeated him on at least one occasion. When Roku confronted him years later about his actions in the Earth Kingdom, Sozin attacked him by unleashing a massive wave of fire against him, one of the most powerful blasts in the series, even though he did not have access to the power Sozin's Comet provided. However, he was still no match for Roku, who had the other three elements and the Avatar State at his command. When he helps Roku tame an erupting volcano, he uses a technique to redirect heat, cooling the lava. The technique he used appears to be similar to Iroh's lightning redirection move.

Sozin was a very knowledgeable and intelligent strategist. When he and Roku were teenagers, Sozin tricked Roku into tripping over a tree root in order to win a sparring match. Sozin's knowledge made him a capable military leader. He was able to realize with Roku dead, he could accomplish his goals with no hindrance. During the War, Sozin won the Battle of Han Tui by taking advantage of the fact that the enemy had been in the middle of a drought and downwind. According to Azula in a later recounting of the event, their defenses burned to a crisp in minutes. 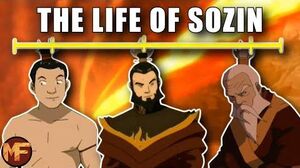