Causing pain to his enemies.

Furthering his own powers.
Destroying all in his path.

He was portrayed by the suit actor Ryō Haritani, who would later portray Destoroyah in the follow-up film.

SpaceGodzilla was created when Godzilla's cells entered a black hole and emerged from a white hole, then merged with crystalline alien organisms and mutated rapidly from energies released by supernovas. There are two given explanations as to how Godzilla's cells ended up in space. The first is that when Mothra headed into space in Godzilla vs. Mothra, she took some of Godzilla's cells with her. Another explanation is that the cells came from Biollante after she fled to space following her final battle with Godzilla.

Whatever the case, SpaceGodzilla headed towards Earth and encountered the mecha, M.O.G.U.E.R.A., whom the crystal kaiju quickly defeated. With that, he continued towards Earth and landed on Birth Island where he fought Godzilla. After knocking the King of the Monsters out with his Corona Beam, SpaceGodzilla captured Godzilla's son in a crystal prison below ground and retreated, with Godzilla hot on his heels, determined to save his child. The crystal kaiju found his way to the city of Fukuoka, which he destroyed, then raised enormous crystals from the ground to create himself a fortress. M.O.G.U.E.R.A. attempted to fight SpaceGodzilla again, but was defeated once more, and then Godzilla joined the fray. While this was happening, the crystal kaiju's weakness was discovered and the King of the Monsters and M.O.G.U.E.R.A. used it to defeat him. After his defeat, SpaceGodzilla then turned into tiny crystal-like particles, floating through space for all eternity.

Godzilla: Save the Earth 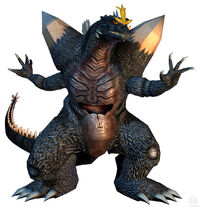 Twenty years after the events of Godzilla: Save the Earth, strange crystals suddenly appeared in space and crashed all over the Earth, causing global disruptions and catastrophes. SpaceGodzilla was responsible, planning to use the crystals to free himself. He was no longer an ally of the Vortaak and had become the leader of the Mutant faction, now manipulating everything himself, and the player monster battled him, once again, as the final boss (unless playing as either SpaceGodzilla himself or another Mutant under his faction). If the player was allied with any of the non-Mutant factions, SpaceGodzilla ended up being defeated. If the player was a Mutant, then crystals arose all over the Earth as SpaceGodzilla took over.

SpaceGodzilla appears in the 2014 Playstation 4 Godzilla game as a playable monster. In the introductory cutscene, he can be seen fighting Ghidorah.

SpaceGodzilla appeared in the final issue of the series Godzilla: Kingdom of Monsters, where he was seen standing on the moon and looking at Earth with sinister intent.

SpaceGodzilla is the titular antagonist of the "Godzilla and SpaceGodzilla Saga", consisting of the first five episodes. When Torema attacks the Xillien Zaguresu's ship, Zaguresu releases SpaceGodzilla from her ship and orders him to destroy the Command Center of Godzilla Island. SpaceGodzilla goes on a rampage across the island until he is confronted by Godzilla. Despite Godzilla trying to stop his galactic counterpart, SpaceGodzilla proves too strong and overwhelms him. Fortunately, Torema convinces Godzilla to use his atomic breath to destroy SpaceGodzilla's shoulder crystals, severely weakening SpaceGodzilla. Godzilla then finishes him off with help from Torema's ship.

SpaceGodzilla is one of the evilest monsters in the Godzilla series. Unlike some monsters, who cause destruction only due to their size or because they are mind-controlled, SpaceGodzilla travels to Earth motivated only by selfish desire and hatred to kill Godzilla and conquer the Earth. SpaceGodzilla demonstrated that he was willing to harm a helpless child when he attacked Godzilla's adopted son Little Godzilla in order to draw Godzilla out, and then captured him in a crystal prison just to taunt Godzilla.

SpaceGodzilla also demonstrated remarkable intelligence. SpaceGodzilla is said to be even smarter than human beings, and makes use of various tactics in battle. SpaceGodzilla utilized Godzilla's emotional attachment to his son in order to attack Godzilla. Despite his impressive intellect, SpaceGodzilla is devoid of any emotion besides anger, and harbors an intense hatred of Godzilla for unknown reasons. Even after Godzilla helped SpaceGodzilla defeat the Trilopods, SpaceGodzilla turned on the weakened Godzilla, kicking him while he lay unconscious on the ground, and roaring furiously in his face.

SpaceGodzilla's abilities are very similar to Godzilla's, such as his Corona Beam and his being almost invulnerable. He can also use telekinesis, create crystals that he can use as projectiles, generate a shield, emit EMP waves, and fire a lightning-like energy attack from his shoulder crystals. SpaceGodzilla can change from his walking form to a more crystalline form that he can use to fly. His only weakness is his shoulder crystals, which he needs to charge with electricity to power himself up. If they are destroyed or his electrical source is lost, SpaceGodzilla will weaken.

While the film received mixed reactions, SpaceGodzilla was generally well-received. DVD Cult said "The monster SpaceGodzilla is excellently designed, and is certainly far more menacing than anything Dean Devlin and Roland Emmerich ever dreamed up.". Toho Kingdom praised his theme music, and said "SpaceGodzilla has a nice, hectic, theme that suits him and works well when used throughout the movie,", while Complex listed the character as #11 on its "The 15 Most Badass Kaiju Monsters of All Time" list, calling him "probably the most powerful thing Godzilla has ever faced". However, the character's design was criticized by Godzilla historian Steve Ryfle, who stated that, although evil-looking, it was too evocative of the haphazardly designed monsters of the generally low-quality Godzilla films of the 1970s like Hedorah and Gigan.