Space Cadet Zombie, or simply known as Space Cadet, is one of the secondary antagonists of the 2019 third player shooter game Plants vs. Zombies: Battle for Neighborville. She is a Space Station pilot who takes part in fighting plants. She is in Defend class.

Space Cadet is a pilot who has blonde hair under her helmet, with a gray headset on her right ear. Her full body cannot be seen all the time. However, it can tell that she wears an orange and gray pilot suit.

Space Cadets appeared in the comics alongside Electric Slides and 80s Action Heroes to fight plant resistances who were trying to rescue the kidnapped plants. 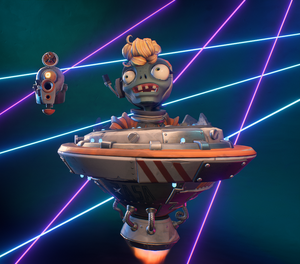 Retrieved from "https://villains.fandom.com/wiki/Space_Cadet?oldid=3601611"
Community content is available under CC-BY-SA unless otherwise noted.