The Madou arrived at Earth following Gavan's departure with the intention of conquering it. Their arrival was heralded by Demon King Psycho using his magical illusion powers to cause havoc all throughout the planet. Hearing that the Space Sheriff Sharivan was on the planet, General Gyrer led a scouting mission to capture him, but Sharivan managed to escape.

After numerous failures to defeat Sharivan, Strategist Reider arrived from the Death Spirit World to join Madou and assist them in fighting Sharivan, leading to strife in the ranks of Madou as Reider displaced Doctor Polter from her spot as high commander. This discord only further widened when Psycho created a throne and announced that it was for his successor as ruler of Madou, leading all three executives to compete to earn Psycho's favor. After Gyrer was slain by Sharivan, Reider would earn the throne by bringing the Demon King the powerful Iga Crystal. However, Reider soon tried to overthrow Psycho and was promptly slain by Psycho's mobile body Psychorror.

The Madou were finally destroyed when Demon King Psycho was killed by Sharivan and Gavan striking both his bodies simultaneously.

After the Madou's initial defeat at the hands of Space Sheriff Sharivan, the Madou resurfaces three decades later under the command of a revived Space Reider and hatched a scheme to revive Demon King Psycho and dominate the entire universe.

Forging an alliance with Shadow Moon, Reider formed the Space Shocker organization from revived past foes of the Kamen Riders to serve as a front for Psycho's revival and divert focus away from Madou's true plans. Led by Shadow Moon, Space Shocker wreaked havoc across the universe by creating Magical Portals with the Madou's magic, leading the Galactic Union Patrol to believe Kamen Riders Wizard and Beast were responsible due to their similar magical powers and to send the Space Sheriffs after them. As this was going on, the Space Shocker forces pursued Psycholon, a miniature robot which secretly housed a fragment of Demon King Psycho's soul necessary for his revival.

Eventually, the Galactic Union Patrol prepared to destroy the Earth with the Super Dimensional Cannon in order to destroy Space Shocker, as their plans posed a threat to the entire universe. However, this was all part of Reider and Shadow Moon's plan to revive Psycho. Despite the fact that the Space Shocker and Madou had been almost completely destroyed by the combined forces of the Kamen Riders and Super Sentai, the Galactic Union were unaware of this and fired the Cannon anyway, allowing the Madou to hijack the energy of the blast and use it to revive Demon King Psycho before it could destroy the Earth.

The reborn Demon King Psycho summoned an Army of Resurrected past foes of the Super Sentai and Metal Heroes to wreak havoc and conquer the entire universe, starting with Earth. A group of reinforcement Riders and Sentai led by Kamen Rider 1 and Akaranger show up to reinforce the other Riders, Sentai and Space Sheriffs against Madou's forces. The Madou were eventually defeated after Psycho was destroyed by the combined powers of the Kyoryugers and Kamen Rider Wizard, while the rest of his army was vanquished by united powers of the alliance of the Kamen Riders, Super Sentai and Space Sheriffs.

The Genmu World is the home dimension of the Madou, containing their headquarters, the Genmu Castle. It is a "white hole" formed from matter sucked up by a black hole. Using their Genmu World-Generating Machine, the Madou can create pockets of the Genmu World on Earth that their fighters can travel through. Within the Genmu World, the Makai Beasts of Madou have their powers amplified by four times. It is similar to the Makuu Space of the Space Crime Organization Makuu.

The Genmu Castle is the headquarters of the Madou, residing within the Genmu World. It houses the Madou's ruler, the idol-like Demon King Psycho, and their fleet of battleships. It also contains, as shown in Super Hero Taisen Z, a network of magic portals that enable their members to travel almost anywhere in the universe linked by the portals.

The Genmu Castle was brought to Earth by Space Shocker in Super Hero Taisen Z as part of a plan by Reider to gather energy to revive Psycho.

The Madou Battleships comprise the fleet of Madou. They are colossal in size, though still dwarfed by the Genmu Castle, and house the smaller fighter crafts of the Madou. One was typically deployed against Sharivan whenever he and the Makai Beast he was fighting were dragged into the Genmu World

The Madou Fighters are space fighters used by the Madou in their attacks. They are deployed from Madou Battleships to fight Sharivan on his Motosharian whenever he entered the Genmu World. They typically fly in groups of three, though larger groups may occasionally be sent out against Sharivan if the situations calls for it. 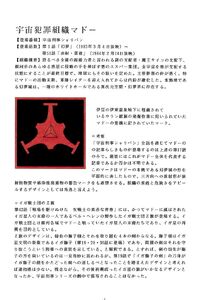 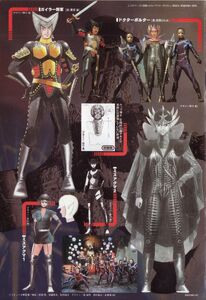