The Space Empire Zangyack are the main antagonistic faction of Kaizoku Sentai Gokaiger. It is a powerful empire seeking to invade and conquer Earth and the universe. It has been claimed several times that Zangyack rules the universe, suggesting that their goal is almost complete, with only the Gokaigers in their way.

Zangyack's forces are a gathering of aliens who conquered various planets and planned to invade Earth for their emperor, Ackdos Gill. The first invasion failed due to the interference of 34 Super Sentai teams in the Great Legend War. The second, current, invasion was overseen by the emperor's son Warz Gill from his chariot-like flagship Gigant Horse, stationed between Earth and its moon, with an armada at his command.

After the Gokaigers killed off Warz, the Zangyack then made the capture and execution of the Gokaigers their top priority to the point of giving Captain Marvelous an "Unlimited Reward" bounty. They were perceived a threat great enough for the emperor himself to come and oversee the invasion personally.

A month after Ackdos Gill's death, as well as the destruction of the majority of their military forces, which had been mobilized to Earth for the final invasion of Earth to exterminate all Earthlings, the Zangyack Empire begins to dissolve with its universal reign coming to an end.

Space Empire Zangyack was later rebuilt as Dai-Zangyack by former member of the Red Pirate Gang and Gokaiger Emperor Marvelous. Its ranks comprised of other revived Super Sentai villains. With this fleet, Marvelous has a new goal, the Greater Power of the Kamen Riders and their universe's Greatest Treasure. This pits him against Tsukasa Kadoya and his Dai-Shocker army, as well as putting the greater Super Sentai and Kamen Rider communities right in the middle. Dai-Zangyack would later go behind Marvelous's back and team up with Dai-Shocker, forming the Shocker-Zangyack Alliance.

When Ackdos Gill's death, Bacchus Gill takes control of Zangyack. He teams up with Enter and the Vaglass to conquer the Earth using the Phantom Ranger Keys. They are later joined by the Gokaigers, having apparently turned evil, and they set course to earth. When they arrive on Earth, they start to fire at civilians and the Go-Busters come to fight them. Bacchus Gill and Waredonaiyer send the Gokaigers to attack the Go-Busters. Captain Marvelous leads his team in attacking the core Go-Busters, and after that, Enter then appears, finding the Red Phantom Ranger Key, but they go haywire, opening up a large portal and sucking in all six of the Gokaigers, Yoko, J, and Gorisaki, leaving only Hiromu, Ryuji, Nick, and Usada. Navi then arrives wondering where the Gokaigers went, but the Go-Busters capture her. In awe at the power of the keys, Enter retreats back to the black Galleon and activates the Phantom Keys' power. The Gokaigers then reveal that they were only pretenting to join Zangyack and go with the Go-Busters to face their foes. The black Galleon then comes under fire from the original Gokai Galleon that Navi had retrieved from the past. While the two ships battle, the two teams unite and transform. They fight through waves of enemies, but are intercepted by an Escape copy as well as avatars of Basco ta Jolokia and Damaras, but manage to defeat them. Waredonaiyer is later taken down by the 37th Super Sentai, Zyuden Sentai Kyoryuger, alongside an army of Sugormin.

The Zangyack's elite soldiers who directly serve the Emperor. 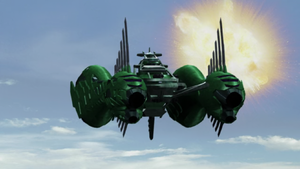