The Space Kook is one of the most recurring antagonists of the Scooby-Doo franchise.

Space Kook is a ghostly skeletal phantom-like space-man monster in a glowing spacesuit, Space Kook' eyes are pale yellow colored, and his helmet glows red when he cackles.

The Space Kook first appeared in the Scooby-Doo! Where Are You? episode Spooky Space Kook, where he was the titular sole antagonist, haunting an airfield with his spaceship. When Scooby-Doo trapped Space Kook in an air tunnel, Space Kook's costume started to fell off, revealing it was farmer Henry Bascombe in a costume. He was trying to scare everyone away so he could buy the land the airfield was built on, dirt cheap. His spaceship was a projection.

The Space Kook appears as a common villain in the game Scooby-Doo! Night of 100 Frights as one of the monster brought back by the Mastermind. He has a gun that shoots rays, and unlike all the other monsters in the game, he can regenerate after being killed. He appears in the Mastermind boss fight.

In a deleted scene of the second live-action movie Scooby-Doo 2: Monsters Unleashed, the Space Kook appears as a costume and was in the Coolsonian Criminology Museum. Unlike a lot of the monsters, the Space Kook wasn't brought to life.

He is the third boss in the game Scooby-Doo! Who's Watching Who?.

In various episodes of Scooby-Doo! Mystery Incorporated, the Space Kook costume is presented by Velma in the Crystal Cove monster museum along with The Ghost of Captain Cutler, The Miner 49er, and Charlie the robot. In one episode, it was stolen by some other aliens.

Space Kook appears in the opening credits of Scooby-Doo! Mask of The Blue Falcon, along with The Miner 49er, The Black Knight, The Ghost Clown and The Ghost of Redbeard.

He appeared in the 2014 film Scooby-Doo! WrestleMania Mystery during the opening credits.

He appeared in the Be Cool, Scooby-Doo! episode In Space. This version is Officer Soung, who disguised himself as space kook to keep the rest of the crew away from the gold he found. Another Space Kook appears in the intro of the series. He is voiced by Tony Todd and Eric Bauza.

Scooby-Doo! And the Curse Of The 13th Ghost

The Space Kook suit appears in Scooby-Doo! And The Curse of The 13th Ghost.

The Space Kook recently appeared in the 2019 film Scooby-Doo! Return To Zombie Island.

The Space Kook is set to appear in the upcoming 2020 computer animated film Scoob! voiced by Don Messick via archive recordings. 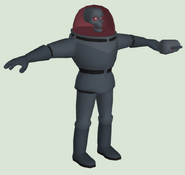 Retrieved from "https://villains.fandom.com/wiki/Space_Kook?oldid=4110182"
Community content is available under CC-BY-SA unless otherwise noted.